Swiss Army Man Review – A Fête of Farts and Fantasia

Swiss Army Man is one of the most talked about films to come from Sundance 2016, and probably one of the strangest ones as well. It tells the story of Hank (Paul Dano), a man shipwrecked on an island alone. Just as he is about to commit suicide, a body washes up on the beach. He discovers the body is named Manny (Daniel Radcliffe) through his totally normal and sane conversation with the corpse. Through a series of trial and error, Hank learns that Manny has magical powers that can help to get him off the island and rescued. Manny is filled with a orchestra of flatulence and Hank determines that he can use that propulsion to ride Manny to safety. As it doesn’t go as planned, Hank and Manny wash up on the shore of another unknown area, much bigger than the previous island. They work together to hopefully be rescued and set off on an exploration of the human mind, spirit and soul (with a farting corpse).

The film, while being one of the strangest films I’ve ever seen, is so incredibly well-done that I have to love it. The film is emotionally raw and cuts down to the basic tenants of what it means to be human and what emotions really are and what they feel like. I learned more from the relationship between a man and a corpse than I learned in 12 years of schooling constantly surrounded by others. While the premise is silly, the emotional resonance certainly is not. Hank projects his emotions onto Manny turning him into a physical representation of his emotional baggage. The film makes you question Hank’s sanity but also slowly forces you to think how we’d behave and even more so, to begin to understand and empathize with Hank. Hank’s character is very emotionally raw and open in this film, which makes the audience question if cross-dressing and playing dress up with a corpse is really that far from the reality of what they may resort to for human interaction, and for that, I applaud “the Daniels.”

The film is visually stunning. It has an unmatched level of composition and craftsmanship; from the set design, to the make up design, to the music. The costumes are creative, imaginative and beautiful. The people and scenes that are recreated using trash and shrubbery from the forest are just impeccably beautiful. They have a wonderful childishness to them, making them even more charming. The music, while being subtle, ties into the fabric of the film so well. Having the film set where there is so much discarded human trash is a bold move in and of itself, because it begs us to question whether our emotional baggage and insecurities seclude us from the rest of society and place us, for example, in the trash. Do we create our own islands of emotional waste and refuse? Again, this is a film with a farting corpse and yes we really are getting this deep.

The performances in Swiss Army Man are incredible. The casting is perfect and Paul Dano and Daniel Radcliffe are pure magic together. Paul Dano is one of those really odd-ball actors who I love. When I think of a cross-dressing, corpse-carrying castaway, no other actor could have even attempted it, let alone created something so beautifully done. Daniel Radcliffe, with the limited words he does have in the film, has created a strong and innocently beautiful character who calls into question our understanding of human interaction and emotions. 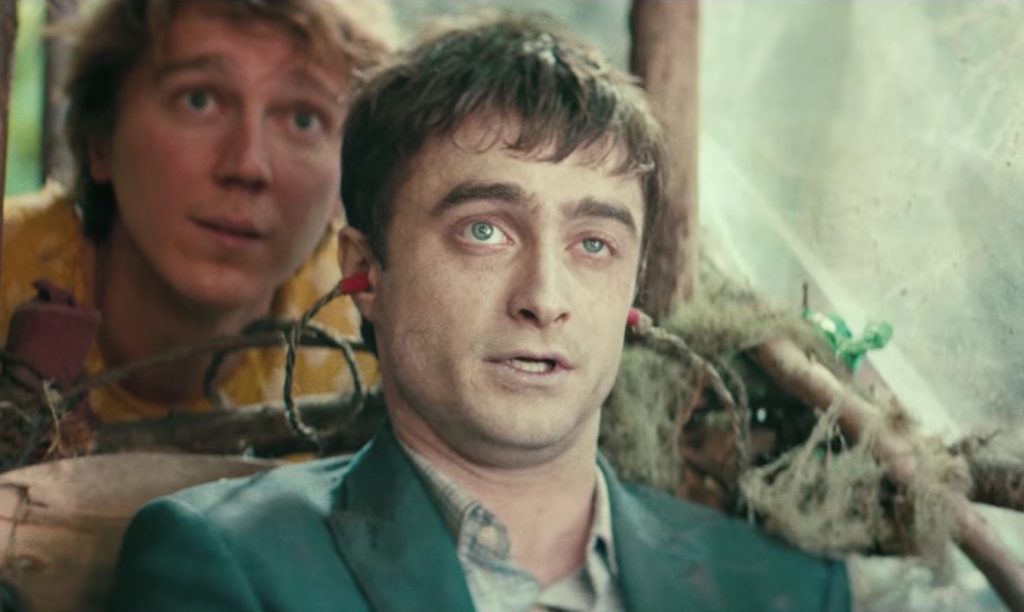 As I had said, this is by far the strangest film I’ve seen in a long time, but definitely one of my favorites. On the surface it can appear crude and childish, but in reality, it is a powerful film about human emotional and alienation. A stellar cast, beautiful costume and set design easily make Swiss Army Man one of my favorite films of the last five years. Bravo!

“Swiss Army Man” Review: A Fête of Farts and Fantasia

Swiss Army Man Review - A Fête of Farts and Fantasia Swiss Army Man is one of the most talked about films to come from Sundance 2016, and probably one of the strangest ones as well. It tells the story of Hank (Paul Dano), a man shipwrecked...
0
Average User Rating
0 votes
Please sign in to rate.