Bobcat Goldthwait takes aim at the media and the current state of the world.

God Bless America tells the story of Frank (Joel Murray), who is basically fed up with the current state of the world. He is divorced with a child that wants nothing to do with him, he is sick and tired of hearing everyone talk about celebrities and media 24/7, he just recently got fired from his job, and last, but not least he may be dying from some sort of rare brain tumor. Tired of life and everything that comes with it, Frank is at his wits end that is until he sees the newest reality TV show about a spoiled teen named Chloe. After seeing just a small glimpse of this show, he decides he must do something to bring sanity and kindness back to a society that strives on commercialism, hate, and fame.

I was lucky enough to have not one, but two 15 minute interviews with Bobcat Goldthwait before seeing the film for the first time. The first interview, I was able to talk to Bobcat, Joel Murray, and the newest up and comer Tara Lynne Barr about the film. I personally really liked everyone and could see how everyone involved felt very passionately about the project. The reason I am mentioning meeting the cast is because I feel that our conversation about the film gave me a much better understanding of the film and what Bobcat was trying to convey in the film.  After seeing this film, I personally think a lot of people will misinterpret or not “get” this film, which as a result will give this film a mixed bag of reviews instead of the high marks that it truly deserves.

God Bless America takes aim at almost everything that I currently hate about the state of the world, but at the same time attacks some of the things that I absolutely enjoy such as giving high fives for the cheese factor, the television show Glee, and some bands that I enjoy such as Green Day and Bon Jovi, but that doesn’t mean that I don’t get the message that this film is trying to convey to its audience. Bobcat has made a film that really dares to be different, ballsy, and attacks everything and everyone. I loved that element about this film because I like when movies dare to mock culture and aren’t trying to censor how they feel.

This film has a really important message underneath the surface about the current state of our society and how we treat one another. There is a lot of truth within this satirical film and I have to admit that some of the speeches that Frank delivers are so powerful and so honest that I wanted to stand up and applaud the character for saying what I have been complaining about for years. Roxy (Tara Lynne Barr) also gives some applause worthy speeches and takes on the state of the world from a younger perspective. I really admire and agree with a lot of what this film has to say and it never comes off as preachy, which I think is incredible since this film is really told through the eyes of only two people, Frank and Roxy.

Speaking of seeing the world through the eyes of two people, this film would have never worked as well as it did if it wasn’t for how amazing both Tara and Joel interact and act as these characters. I know that I connected with both these characters and understood their pain and frustration. I really connected with Frank because I know what it is like to have days like he had in the beginning of the film. There are plenty of moments in life where a person feels like Frank does in this movie and if you haven’t  felt that way yet, well just know it’s coming so be prepared.

The chemistry between Joel and Tara is pretty much dead on and you can see both their characters form a bond that only gets stronger as the film goes on.  There should be a level of creepiness from this film since it’s a movie about a 50 something male and 16 year old girl, but it never gets uncomfortable because you can see that while these characters are angry at the state of the world, they aren’t bad people and Frank isn’t going to become a pedophile by the time the film ends. This is more or less a film about the relationship of two people bonding over a common interest and belief, which ironically is a hatred for mean people and celebrity obsessed culture.

The oddest and funniest thing about this film is that it is truly is a satire because while it is poking fun at things, it’s also doing everything it can to offset the message it is trying to convey. Frank and Roxy talk about movies, media, and culture almost constantly throughout the film, while the idea of going around and killing people to stop people from being hateful is a mean and horrible act. I loved this element of the film because those who can’t see the humor obviously don’t understand American culture as a whole and can’t appreciate smart satire.

Bobcat Goldthwait told me in the interview that he got the idea for God Bless America while watching television and that is what inspired him to write the screenplay for the film. He said he was tired of seeing commercials with farting animals and stupid reality television shows like Jersey Shore so he decided to write something that took aim at the current state of media. When you see the film, the dialogue is sharp, the scenes are well written, and the story is both timely and true to the current state of our society. Bobcat really knows what he is doing when it comes to writing and directing and said something to me that I truly admire as a film lover. He told me that he makes films for himself first and an audience second. I think most great films are made this way, because if you as a creative artist like what you did and you are passionate about it, then you will more than likely create something that others will find rewarding because like this film suggests people are a lot more a like then one would think in both the good and the bad.

At the end of the day, God Bless America is such a well-made film that I literally want to stand up and applaud Bobcat Goldthwait for having the balls to create a film like this. I hope to see him again sometime soon because I would love to shake his hand and tell him just how great of a film he has created. His direction and writing is top notch and this is a film made for anyone who wants more from the current state of this country. This is a film for those who wish people can talk with one another rather than always argue,  that people would generally care more about others, and finally for those who want to be entertained with quality and substance rather than a bunch of wannabes with zero talent who act like immature morons.  Well done, Bobcat, this is without a doubt one of my favorite films of the year. God Bless You and God Bless America!

MovieManMenzel’s final rating for God Bless America is a 9.5 out of 10. 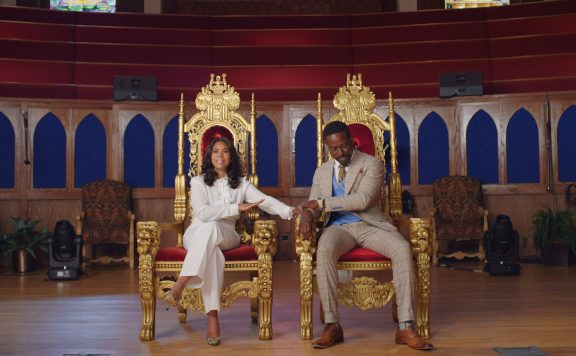 How Damien Chazelle Inspired ‘Honk For Jesus. Save Your Soul.’
September 1, 2022