Faults is a mysterious little gem from first-time feature film director Riley Stearns. Stearns also wrote the screenplay, and his wife, Mary Elizabeth Winstead, stars in the film and helped produce it. This was obviously a passion project for them, as Winstead gives one of her best performances yet and Stearns announces himself as a true talent.

The film concerns Ansel Roth (played here by the underrated Leland Orser), a down-on-his-luck writer who primarily deals with cults and the idea of deprograming victims. After hitting his limit with book deals and owing some money, Roth reluctantly accepts to deprogram an older couple’s daughter. She is a young woman named Claire (Winstead).

Claire claims to be involved with a group called “Faults,” which supposedly allows people to see past the ridiculousness of human life and move on into other stages. Roth takes the matters into his hands by taking her for five days and speaking to her in a hotel room. The majority of the film takes place in the room and deals with the process of deprogramming, but it has some twists and turns along the way.

When I spoke with Stearns, he claimed he was partially inspired by the tone of Fargo (1996) for Faults. After seeing the film, I believe he nailed that tone. Faults manages to be small-scale and tense, but it’s also darkly hilarious in many moments. For instance, the opening scene involves a flavorful argument about paying for a meal instead of just getting straight into the meat of the idea of cults. Stearns delivers sharp writing in this way, managing to pull off a balance of wit and ominous workings throughout. He also allows each of the two lead characters to become layered, which helps to keep things interesting in the small settings.

Stearns has skill behind the camera as well. As a director, he expertly uses his environments in order to make things tight and claustrophobic. The use of the hotel room setting even reminded me of Memento (2001) at times – which is never a bad thing. Stearns delivers some awesome images and surprises by the end, but he also never lets them overcrowd the initial story and characters. Such a juggling act shows promise.

Stearns’ technical team deserves some credit as well. The cinematography by Michael Ragen is exceptional, getting the most out of the hotel environment; the use of light with TV screens is excellent. The music score by Heather McIntosh is also great, providing an unsettling feeling throughout. Finally, the editing by Sarah Beth Shapiro is terrific; a few shots manage to linger for just the right amount of time before cutting away.

Faults wouldn’t have worked as well if not for the two lead performances. Winstead brings a deepness and darkness to the table that we haven’t really seen from her before. The performance at once invites both creepiness and sympathy, which is a hard thing to pull off. I hope the actress continues to take risks like this.

Orser – who looks a bit like film critic Peter Travers in this film – is equally as good. The actor, who usually resorts to supporting roles, gives us an interesting portrait of a man who has fallen off the horse. He allows Roth to be pathetic but still worth rooting for, and he adds the right amount of hilarity and emotionality to the part; he is also believable as an “expert on cults.”

The supporting cast is pretty good as well, but this show belongs to Stearns, Winstead, and Orser. The two actors bring their all while Stearns presents a thrilling and funny take on cults. Faults doesn’t have many faults, either; a lot of the viewing will just depend on certain taste in dark comedies. I urge one to seek this little film out if it happens to come near them, and I look forward to seeing what Stearns does next. He is one to watch. 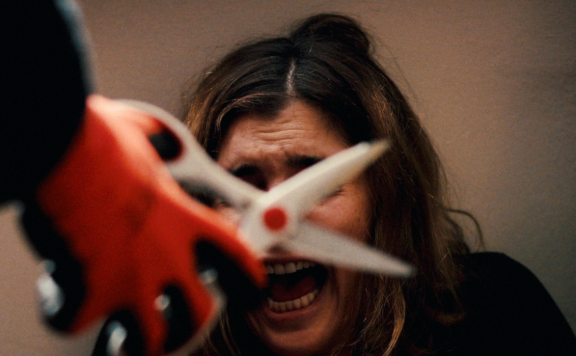