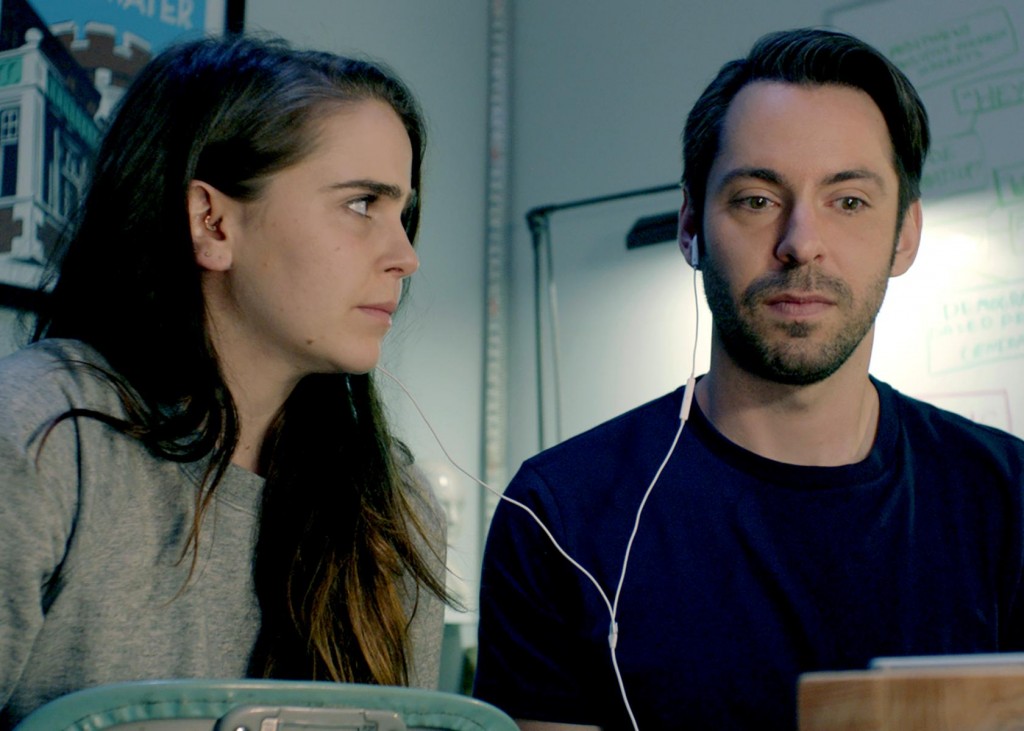 This is my absolute favorite film of the festival. It packs a punch of emotional reality that leaves the audience stunned. Mae Whitman and Martin Starr have such incredibly chemistry and give powerhouse performances in Operator.

Emily (Mae Whitman) and Joe (Martin Starr) are a young married couple who are really different people in many ways. Emily is very emotionally invested in everything and has an innate empathetic nature, while Joe is extremely analytic and data-centric. They contrast each other in a very natural way, but we begin to see the tension that creates as the film develops.

Joe works for a software company that is in the process of developing a smart app operator for a healthcare system called Welltrix. They are struggling to find a voice that the boss, Roger (Rhetta) likes until Joe has the idea to use Emily’s voice. He convinces her to do it saying that she can quit her job at the hotel and do the voice recording while focusing on her play at the theater. They begin to record the prompts using her voice. Everything is going smoothly, that is until Joe decides that he needs more and more from Emily. He tells her she can’t quit her job and he needs more data to perfect the system. At this point, we begin to see the breakdown in the relationship between Joe and Emily. Joe is extremely emotionally dependent on Emily to help him through his crippling anxiety. Emily becomes extremely overwhelmed and has difficulty balancing all the things that Joe needs her to do.

As Joe is feeling like he needs more support than Emily has been able to give him, he searches for that support from another source, that source being the operating system he has designed around Emily. Joe begins lose his grip on reality and the functions of a normal relationship.

At one point, Joe’s mother, Beth (Christine Lahti) goes into the hospital and needs help with taking the shots she has a fear of taking. Emily and Joe come to help her and in the most intensely emotional scene in the film, Emily and Beth sing “Because the Night.” The amount of raw emotion in that scene is mesmerizing.

As I said, the acting in the film is superb. Mae Whitman is incredibly talented and a true delight in this film. The reality in which she portrays her emotions is so raw and honest. Martin Starr has perfectly portrayed a data-centric analytical person who has difficulty relating emotionally to others. The supporting cast of this film is just as strong, especially Christine Lahti, bringing us that perfect scene with her and Mae. It was so intense and intimate.

In the film, the playhouse that Emily participates in is a theater where they write their own stories and some get chosen to be performed. This was a great vehicle for Emily to get her emotions and feelings with Joe out and process them. The plays within this film were really well done and added another level of emotional analysis that certainly enhanced the story. I really appreciated that as an inside look at Emily’s feelings and thoughts. The writing in the film and in these plays is so touching and I applaud the emotional openness of this film and what the writers Sharon Green and Logan Kibens have given us.

This film was incredibly personal, intimate and emotionally powerful. It took a real look at what it is like to be in a long term relationship or marriage that involves a lot of moments of give and take. It doesn’t sugarcoat relationships or make them look perfect, but rather recognizes the imperfections and the strength and you can find in yourself and each other. It is so wonderfully done and I absolutely love it. It is my favorite film of the fest and of the year. Bravo!

SXSW 2016: “Operator” Film Review by Ashley Menzel This is my absolute favorite film of the festival. It packs a punch of emotional reality that leaves the audience stunned. Mae Whitman and Martin Starr have such incredibly chemistry a...
0
Average User Rating
0 votes
Please sign in to rate.