Hot Summer Nights was one of my favorite movies at SXSW, so I stayed for the Q&A to hear what writer/director Elijah Bynum had to say about his debut film. A teenage crime story set in Cape Cod one summer in the ‘80s, Hot Summer Nights should hit home for many east coasters.

“I’m from Massachusetts but I’m from a different part of the state,” Bynum said. “I had gone on vacation there a few times with my parents so I knew the area. But the story really came from these two kids I knew in college who were up to no good and started selling weed around campus. It started small and then it got really big. What was most fascinating was watching their friendship. It was kind of an odd pair, similar to Hunter and Daniel’s character in the movie. As their business grew, their friendship grew and the more successful they got, their friendship started falling apart at the seams and it ended in quite dramatic fashion one night. They both disappeared. No one really knows what happened to them. I thought there was something very interesting about that. That’s why I wrote the movie.” 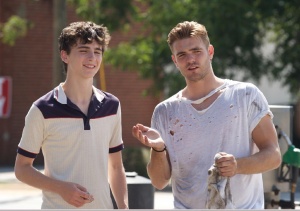 Timothee Chalamet and Alex Roe play teenagers who become the marijuana kingpins of Cape Cod. The story is narrated by other locals who don’t figure prominently in their story.

“I think there’s something very interesting about when you’re young, your perspective on the world and certain individuals you meet,” Bynum said. “All these individuals, in a way they feel familiar. They feel like an archetype you’ve seen before. When you’re young, people like this feel larger than life. Everything feels a little bigger than it would if you were middle aged looking back. I thought there was something kind of magical and almost surreal about looking at it through a child’s perspective. Everything’s enhanced. Everything’s embellished and it felt like a story that had been passed down. So the details may have been flubbed through different variations of the story. It gave us the kind of artistic license to get creative in ways that otherwise we wouldn’t have. It would’ve grounded the story and I think taken away a little of the magic.”

Hot Summer Nights combines many genres like coming of age, teen comedy and hardcore crime lord saga. Bynum says there is a key turning point in the film.

“The arcade scene’s a pretty specific shift,” Bynum said. “After the arcade scene, I don’t think anyone else laughs for the rest of the movie. We broke the movie up into three months, June, July and August. By August, I guess some of the innocence of the movie wore off because Daniel (Chalamet)’s innocence was wearing off, the movie’s innocence was wearing off. I think towards the back 1/3 of it, it started getting very depressing. I think the arcade scene was probably the most dramatic shift. Hopefully it was somewhat subtle so it didn’t knock you over the head, but that was probably the most memorable scene.”

Hot Summer Nights was a Black List screenplay, but Bynum didn’t wait for someone else to direct it.

“I wrote it four or five years ago,“ he said. “It was the second script I’d ever written. It was an idea I had and I wanted to write something honestly that would just launch a writing career. So I finished it pretty quickly and put it on the shelf and it sat on the shelf for a number of years. It wasn’t until probably two years ago that the idea of directing it came up. I didn’t run off any tell anyone that I wanted to direct it. I kept it as a secret to myself. I met with Imperative Entertainment, it was a production company. We had a meeting, Bradley Thomas had bought the script. I had enough courage to tell him, ‘I’ve been thinking about directing this thing.” He pretty much told me I was crazy if I didn’t direct it. By the end of the meeting, I was the director and that was that.”