I’ve always wanted to see a James Bond movie where he traveled the world, fought the bad guys and seduced men (no, that one line in Skyfall is not enough). A lesbian Jane Bond is a good start. My idea is still too confronting to homophobes but homophobic men at least can accept lesbians first. Baby steps.

Atomic Blonde mixes Cold War espionage with modern fight technique. Lorraine Broughton (Charlize Theron) meets contacts and doesn’t know who she can trust. Delphine (Sophie Boutella) is her French Intelligence Bond girl in what would probably be too progressive for the era in which Atomic Blonde is set, 1989, but has been long overdue so thank you for finally making LGBT action, and not making it exploitive.

Broughton is being debriefed by her superiors after the mission. We’ve seen her entire body bruised in an ice bath and this is the story of how she rendezvoused with David Percival (James McAvoy) looking for a list. It’s a standard MacGuffin but like everything else, women have to break the glass ceiling just to get the same generic action vehicles as men.

That stairwell fight is the centerpiece action scene of the film. Everything else was a warmup. You start to see how she got bruised and start counting the injuries. Her other fights feature more basic strikes but are clear and dynamic. Fighting multiple opponents she alternates strikes so she hits one while the other is recovering.

In between fights, the business of spywork can be slow and plodding. For better or worse, it’s everything male spy movies can be. Although, die hard John Le Carre fans may be just as excited to see the feminist handling of exposition as I was to see her kicking ass.

I predict a franchise. Broughton will have to go undercover as Atomic Brunette and Atomic Ginger. Then decades later she can come out of retirement as Atomic Silver Fox! 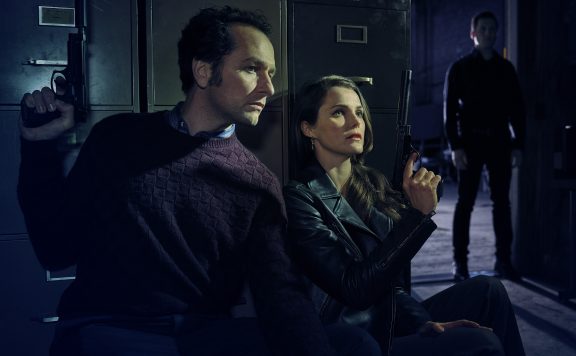 The Americans At TCA: Keri Russell, Matthew Rhys and the Creators on the Final Season
January 6, 2018