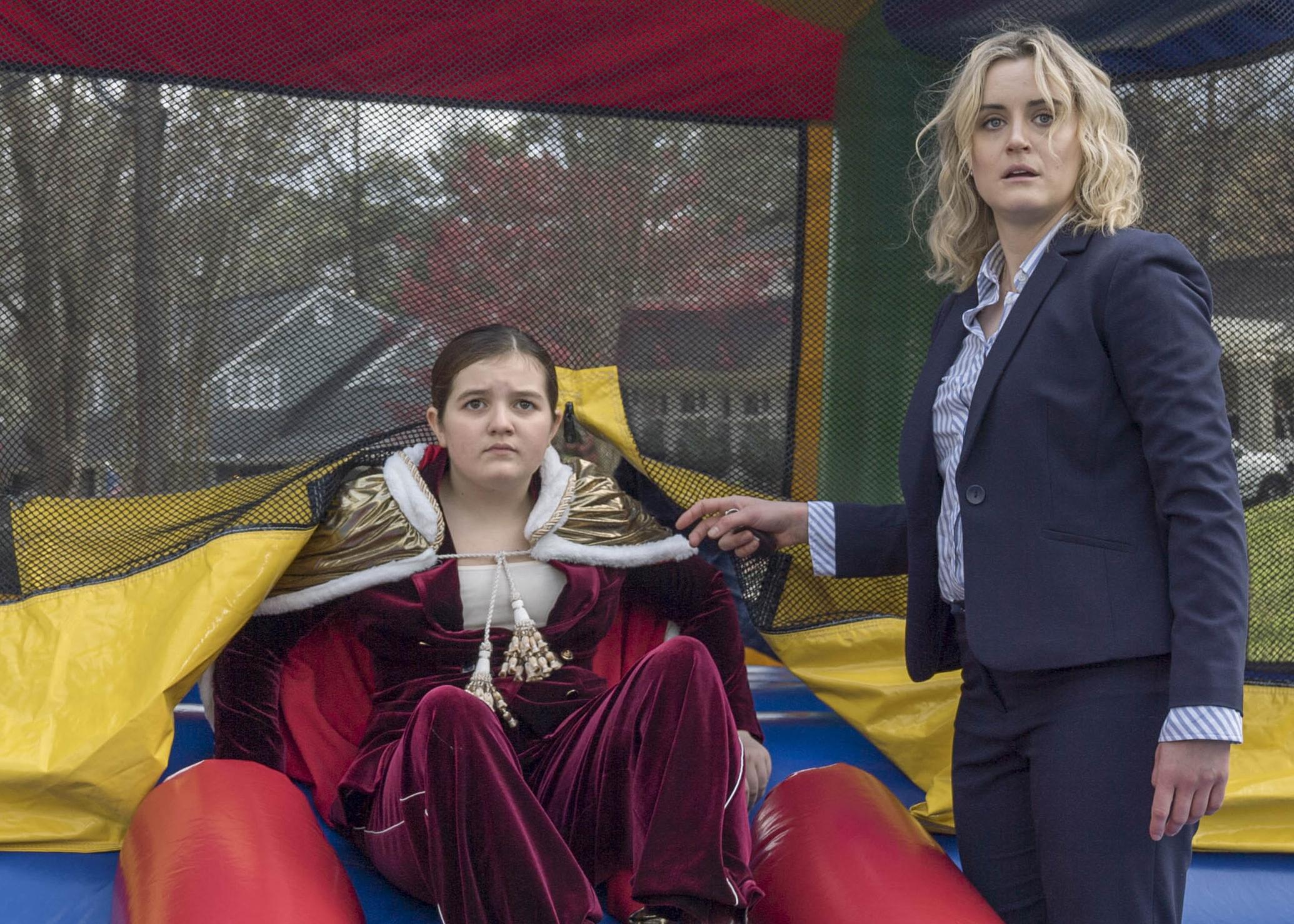 Kate (Taylor Schilling) is living her top executive life in New York City. Seemingly well put together, we get to dive into her personality head on and learn that she is struggling to connect with others. She is incredibly awkward and an asshole without really knowing what to do to fix it. When her brother calls in desperate need of a babysitter, she is forced to watch her 11-year-old niece in the suburbs of New Jersey. Maddie (Bryn Vale) is not quite the average kid and has trouble fitting in with other girls her age. While her mother, (Allison Tolman) wants her to do ballet, she is more interested in karate and sneaks from ballet class to take karate with Sensei Pete (Brian Tyree Henry). Once Kate comes into her life, she gets to express herself a little more, even making a new friend, Baby Joker (Fabrizio Guido), a Juggalo. Through her new friend, she is exposed to the Juggalo lifestyle and learns that it is all about embracing the inner freak and accepting everyone for who they are. The Juggalos are fans of the Insane Clown Posse and have a very close-knit group that is sometimes misinterpreted.

Writer/ director Laura Steinel gives a powerful and hilariously heartfelt first feature. The casting could not have been more perfect. I never knew that Taylor Schilling could be so funny. The script is funny but gets to the heart of a family, whether biological or otherwise. The lines of dialogue are both quick-witted and hysterical. I laughed so hard at a line about Maddie looking like “the Burger King,” or when Kate asks “ew, why?” when someone says they’re going to the Macaroni Grill. What I love about Kate’s character is that we are seeing a woman that is not perfect and one that isn’t necessarily likable, but we learn through the film and through Kate’s journey that it is okay to have films featuring imperfect and unlikeable women.

What is so refreshing about Kate’s journey is not only that she is an unlikeable character, but also that her self-discoveries and realizations were not done through the lens of a romantic relationship, but rather through love, family and self-acceptance. Not only is Kate given and delivers fantastic dialogue, but Maddie also joins the fun. In one scene where she tells Kate, totally deadpan, that “magic is [her] passion,” I couldn’t stop laughing. This is balanced well with scenes of true emotion and love. Kate and Maddie begin to connect when Maddie asks Kate about being awkward as a kid. She asks if it all gets better in the end, and Kate replies no, but weird kids tend to be successful adults. I thought this was a great moment of honesty. Later in the film, Kate shows Maddie a picture of herself and shows her that they were very similar and tries to connect with her niece. It is at this moment that I feel Kate really thinks that she can help and be helped by a relationship with Maddie. I really appreciate that the film addresses this idea of “otherness” and people not feeling like they don’t belong and offers, not a solution, but an idea: that you can be yourself and belong somewhere and that’s okay.

Some of the most fascinating scenes come toward the end of the film when we get a look at a gathering of Juggalos and what their world is. It is both disorienting and fascinating to see the order in the chaos and the comradery in the group. It must’ve been challenging for them to film scenes that were authentic and gave proper respect and attention to a famous and very proud community of people. I loved the little cameo by Natasha Lyonne.

Laura Steinel, after this first feature, is destined to make more great films. Her writing is spectacular on every level, and she treats her characters with love, and they come across genuine. She has a voice and a sense of humor that shines through the script and announces that female writers and filmmakers are the future of comedy. Taylor Schilling gives her finest performance to date alongside the fantastic performance by a young actress, Bryn Vale. Family is hilariously funny reminding us that it is okay just to be yourself.