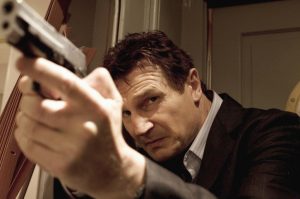 In TAKEN, Liam Neeson stars as Bryan Mills, an ex-government operative who has less than four days to find his kidnapped daughter Ð who has been taken on her first day of vacation in Paris.

When Taken opened 10 years ago today, it created a new genre. The Liam Neeson action movie has been going strong for a decade now, surviving even the actor’s suggestions he’d retire from action. I think Neeson was always a well liked actor but didn’t often do mainstream movies. Every once in a while a Schindler’s List or Michael Collins would be acclaimed enough to keep him in front of eyeballs, or he’d show up in a supporting role in Batman Begins or Love Actually, but I think audiences were always ready to see Neeson lead a mainstream movie.

So just putting Neeson in a simple, high concept movie was exactly what people wanted to see him in. Father rescues his daughter from kidnappers. Yes, we want that. Of course it wasn’t Neeson’s first action movie. I loved Darkman but his face is covered for most of the movie. Rob Roy was a minor hit in the shadow of Braveheart the same year. Perhaps if The Phantom Menace were weren’t so derided due to other characters, Qui Gon would have launched Neeson into more tentpole movies. There is a right place right time aspect to Taken.

Luc Besson has been writing and producing vehicles for action stars like Jet Li, and created the Transporter franchise for Jason Statham. Taken was probably just supposed to be another one off but he really hit paydirt. 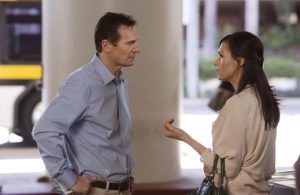 What I always liked about Taken was Brian Mills (Neeson) was not a good husband to Lenore (Famke Janssen) or father to Kim (Maggie Grace). He fell short in most things that matter to families, like being there and following his daughter’s maturation. But if you get kidnapped, he is the one who will rescue you. That’s sort of what makes Die Hard work too. John McClane is a bad husband but when terrorists take over, he is the guy you need in your corner.

I always like that idea in drama of people who aren’t good at socializing but get their moment to shine. I guess it’s an optimistic fantasy that difficult people will serve a purpose in a crisis. In real life, I rarely see difficult people step up, but it makes good drama. 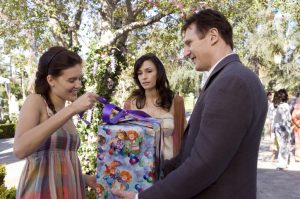 Brian doesn’t follow the rules. It’s annoying when he disrupts his ex-wife’s carefully planned birthday party, but you want that rule breaker to cut through the red tape when government agencies are dilly dallying while you’re daughter’s been kidnapped.

It’s also about how money can’t buy you safety. Kim’s stepfather (Xander Berkeley) gives her a horse for her 17th birthday, during a lavish party party on the lawn of their mansion, but he can’t buy her back from Eastern European sex traffickers. It was actually Stuart who bought the tickets and booked the hotels, so his money actually made the girls targets, although the carefully orchestrated entrapment at the airport probably works on tourists rich or not.

Only Brian Mills can find his daughter in a whole country based on scant clues Kim gave him while being taken. When he gives his “particular set of skills” speech and the kidnappers respond “good luck,” it’s on. 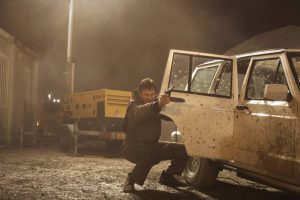 Bryan Mills (Liam Neeson) engages in a fire fight with the vicious gang that has kidnapped his daughter in Paris.

Neeson learned to fight although Pierre Morel used the quick cut shaky style so you couldn’t really see the choreography. You just knew he was fast. I’d protest but the world accepted Paul Greengrass years before and Taken is comparatively more clear than that. It’s almost as if adjusting to Greengrass made Taken feel relatively discernible. The idea is that Mills knows where to hit people to immobilize them with as few strikes as possible, and that comes through.

While Neeson action movies are sort of a franchise unto themselves, Taken itself became a franchise. By nature, any sequel would have to be less pure than the original. Taken 2 saw the bad guys come after the Mills family for revenge, but included a fun reversal of Kim rescuing her parents. By Taken 3 no one was even taken. Nobody cared about the NBC prequel series because the hook of Taken was seeing Neeson fight. Expecting viewers to care how he got those skills as a young recruit was rather presumptuous.

Neeson is still going. Cold Pursuit comes out February 8. He’s in Men in Black: International and attached to play Philip Marlowe in a reboot. I wish all this had happened after Darkman (including proper Neeson starring, Raimi directed Darkman sequels) but better late than never!