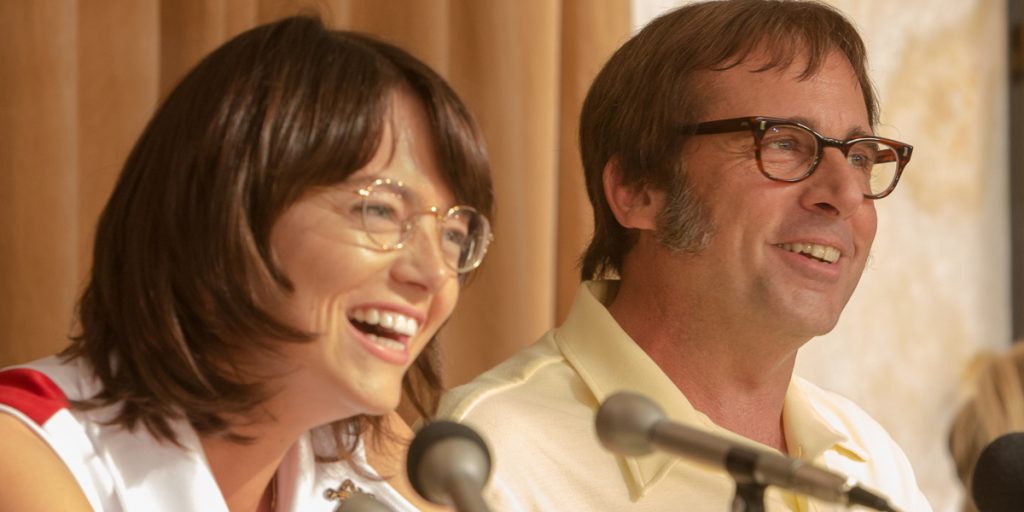 Written by Simon Beaufoy (Slumdog Millionaire) and directed by filmmaking duo Valerie Faris and Jonathan Dayton (Little Miss Sunshine & Ruby Sparks), Battle of the Sexes is an intimate, in-depth look into the life of Billie Jean King (Emma Stone) and her launch of the Women’s Tennis Association (WTA) in 1973. The film highlights several of her biggest accomplishments including her fight for equal pay for women, discovering her sexuality, sexism, and her world-renowned tennis match with Bobby Riggs (Steve Carell).

Fresh off her Oscar win for La La Land, Emma Stone knocks it out of the park once again with her portrayal of Billie Jean King in Battle of the Sexes. It is somewhat amazing to watch Stone’s career continue to grow because, with every new role she takes on, she only gets better and better. Her performance as Billie Jean King will, without question, earn her another Oscar nomination come award season. Stone completely disappears in the film and becomes Billie Jean King. This is a remarkable feat for the actress because as most people know playing a real life person is no easy task.

Billie Jean King has led an incredible life, but it was no easy battle. Stone completely captures Billie Jean’s emotional and physical struggles not only with her fight for equality but with her private battle of her sexuality.  Stone is so gifted because she not only delivers dialogue with such conviction but also through her eyes and facial mannerisms. There are certain moments in this film where she needs not to speak, but her facial movements speak for her.  Her portrayal of Billie Jean King is nothing short of perfection. 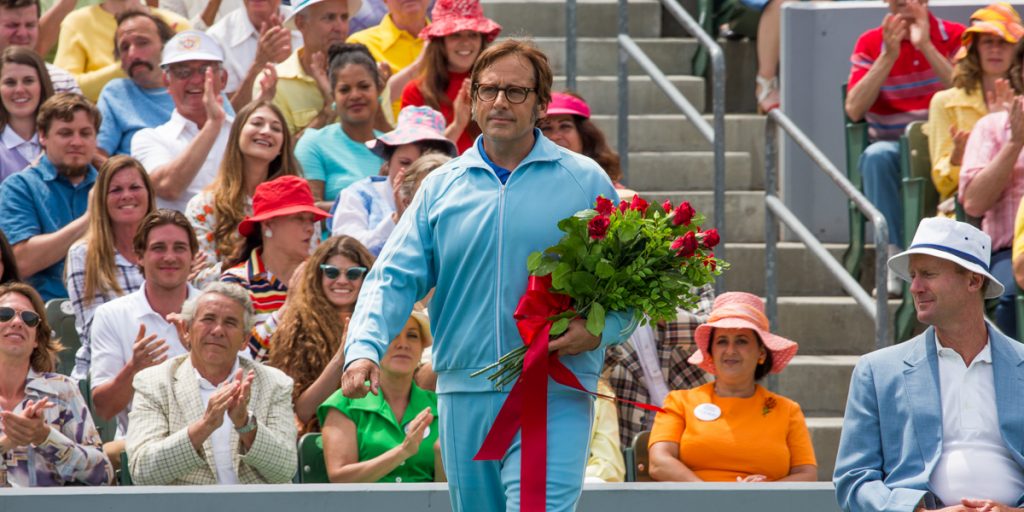 Steve Carell as Bobby Riggs is hilarious. Carell was the perfect choice to play Riggs because he has played characters such as Michael Scott from The Office, so he clearly has the ability to be a lovable jerk. Riggs is a trash talker and a bit of a chauvinist. He also has a fairly big gambling problem. Riggs could have easily been written off as a joke, but Carell’s performance highlights that there is more to him than what meets the eye. I love the scenes where he is playing with his son Junior and the conversations that he shares with his wife Priscilla (Elisabeth Shue).

What’s so surprising about Carell is how much he looks like Riggs as a person. It’s almost uncanny.  Carell’s portrayal of Riggs gives the film a nice comedic touch. The fact that Riggs was outspoken and arrogant works so well to make Battle of the Sexes not only an emotionally powerful film but an entertaining one as well. The scenes where Billie Jean and Bobby play it up for the cameras are great little moments and show that they can have fun before the seriousness ensues.

The supporting cast is pretty great all around as well including Alan Cumming as Ted Tinling, Bill Pullman as Jack Kramer, and Natalie Morales as Rosie Casals. However, there are a few performances that do stick out a bit more than others.  Among them is Andrea Riseborough as Marilyn Barnett and Austin Stowell as Larry King. These two actors play two people that were a big part of Billie Jean’s life and had a lot of impact on her. Marilyn is a hairdresser whom Billie Jean meets and soon discovers that she has feelings for.  Larry King is Billie Jean’s loving and supportive husband. There is a lot of internal conflict between all three of these characters but the way that the script and these actors handle it all is very refreshing and inspirational. I love that the film doesn’t try to sugarcoat these moments but rather makes the viewer understand the character’s feelings and frustrations with the current situation.

Valerie Faris and Jonathan Dayton have crafted a beautiful film that looks and feels as though it was made in the 1970s. Everything from the haircuts to the various set pieces is handled with such love and care. What really stood out about the direction were the scenes that felt like they were stock footage from 1973 with the real Billie Jean and Bobby Riggs being replaced by Emma Stone and Steve Carell. I don’t know how Faris and Dayton were able to achieve this, but I was pretty impressed by how authentic it looked and the feel it gave to the film itself.

Battle of the Sexes is the feel good female empowerment film that the world needs right now. The film tells an emotional and powerful story about standing up for what you believe in and overcoming the odds. Emma Stone delivers the best performance of her career and will easily be a front runner this award season. Battle of the Sexes is a must see for everyone and anyone.  I loved it!

Scott ‘Movie Man’ Menzel’s rating for Battle of the Sexes is a 9 out of 10. 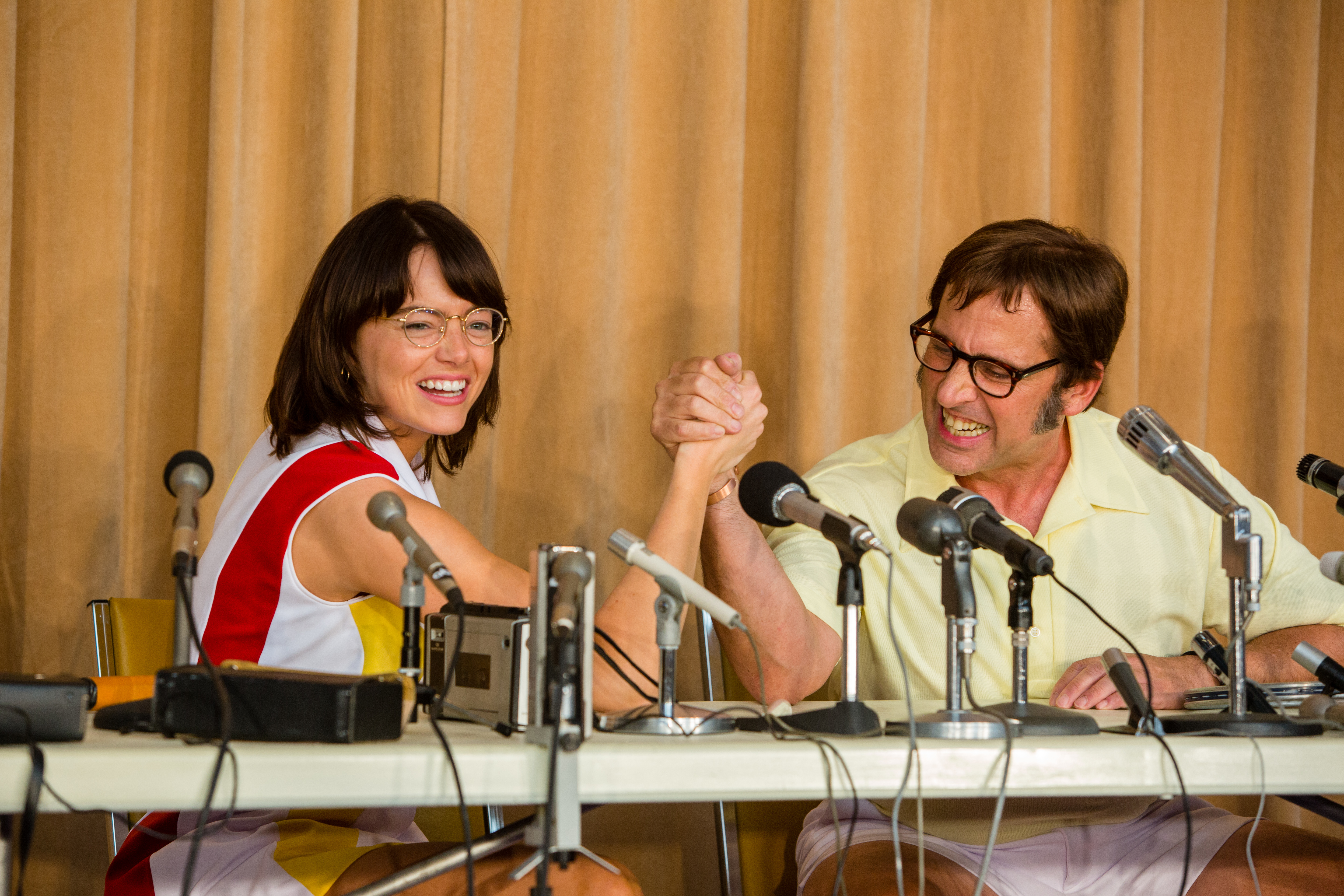 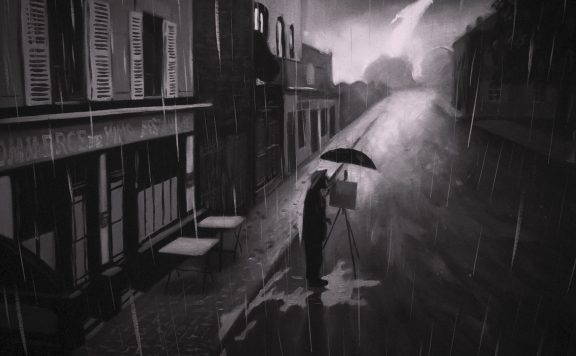