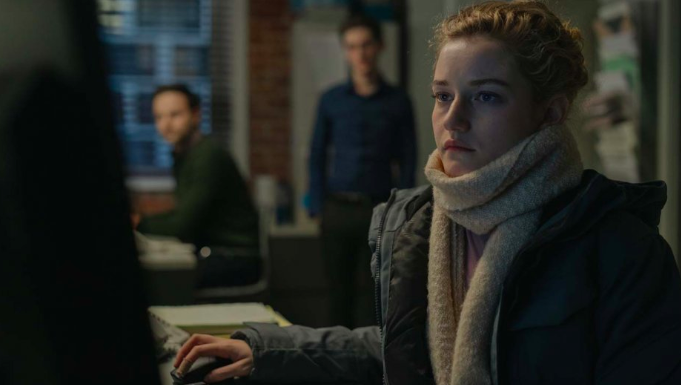 A wildly popular topic, taking a not so subtle jab at men like Harvey Weinstein amidst the #metoo movement, The Assistant follows one day in the life of an assistant (Julia Garner) to a powerful film executive. Her day begins with prepping the office, cleaning up messes, scrubbing the couch that people in the office refuse to use, and other tasks. Throughout the day, we see her frustration and moral struggle with what she assumes is happening around her with these young actresses that the executive brings to his office. While she is helpless in the situation, you can’t help but feel angry with her lack of action.

Director Kitty Green has moved her way over from non-fiction to fiction with The Assistant. While I can appreciate what she was trying to accomplish with this film, it feels too much like a documentary that is, unfortunately, lacking in the emotional department. We watch a young woman through a single day in her life but feel no closer to her. The character feels foreign and detached, never allowing the audience to feel her emotions. The film instead feels quite cold and sterile. As Julia goes throughout her day, she encounters multiple women which could have been a prime opportunity to develop some emotional heft and take a stance, but instead, it just ends up offering nothing new and feels like a waste of time.

Green had the opportunity to make a statement or take a strong stance but never does. The film doesn’t do much to offer anything new to further the conversation about a very timely topic. The Assistant lacks the emotional pull and stance to really live up to its true potential. Despite a decent performance by Julia Garner, the film is ineffective as it is a missed opportunity to say something new.

Telluride Film Festival 2019: "The Assistant" Review A wildly popular topic, taking a not so subtle jab at men like Harvey Weinstein amidst the #metoo movement, The Assistant follows one day in the life of an assistant (Julia Garner) to a ...
0
Average User Rating
0 votes
Please sign in to rate.