I won’t say I’m a fan of Sacha Baron Cohen, but I do respect the way he does comedy and I enjoy the way he pushes the envelope when most people are afraid to. He shocked the world with the politically incorrect Borat, he disappointed the world with Bruno and now Cohen is back doing what he does best, playing an offensive character in hopes of getting laughs. Most of the time the jokes are funny, other times, just plain dumb. Is the Dictator a winner, or just a massive bomb? Sorry, that was dark.

The story follows General Aladeen (Cohen) who travels to America to represent…whatever made-up country he was from, in a United Nations peace treaty signing, but the plot of the movie doesn’t really matter much. There are cameos from celebrities like Megan Fox and John Reilly but their roles are so small it’s almost not worth going into. A lack of an interesting plot may sound like a weakness in most movies but people don’t come to these kinds of movies to see how the story comes together. Instead, they come for the offensive jokes and very dirty humor. If that’s your thing, this movie has a lot of it. If not, then stay away.

Come to think of it, it almost seems silly for me to write a review of this movie because you should know based on what type of movie this is if you will like it or not. If you are an easily-offended person who gets all flabbergasted after every punch to America, then there is no shot you are going to like this movie. To me, I’m a guy who doesn’t get easily offended. Yes, jokes like this are terrible if used with the wrong people in the wrong context and no one should try to offend anybody on purpose. But, you have a choice to see this movie or not. You can’t go into it and complain about how dirty and offensive it is because you already know that’s exactly what the movie is – dirty and offensive. Calling it this is a compliment to Cohen and Co. imagine going to a Transformers movie and complaining about watching loud fighting robots. So, since I don’t get easily offended, I found the movie pretty funny. I also found it entertaining to see what wacky characters Cohen comes up with and how he uses them as relevant placements in pop culture.

That having been said, the film had it’s fair share of missteps. Unlike Borat and Bruno, The Dictator tried to be an actual story style movie instead of a mockumentary that had been working out well for Cohen. Part of what made his past work so hilarious was the shocking reactions to people as they were captured on hidden camera. Here, with everything staged, it just seemed like it was missing something vital to keep the laughs fresh. Also, Borat and Bruno had stories, but they were simple ones. This plot isn’t a complex one, but they tried way too hard at making sure there was one, which sometimes took away from the humor and nature of the material. Maybe this is Cohen’s transition into more serious style of movie, but for this one, I would have loved to see a mockumentary. Another sign that Cohen might be turning a over a new leaf is that this movie actually tried having a serious side, or a semi-serious side. Unfortunately for him, the serious elements failed, and every time it seemed that’s what they were going for, an offensive joke would be spit out to bring it back to the raunchy realm. It was almost like they were afraid to commit to a dramatic side of the story.

I know it seems like all I’m doing is complaining, but I can’t fully compliment the movie without talking about the jokes and all I can really say about them are that they are aimed for the target audience. I can’t stress this enough, if you are easily offended, don’t see this movie! But if you can enjoy jokes like this without really focusing too much on its flawed plot structured, it can be a fun time at the movies. For me, I laughed a lot and that’s all I was looking for going in. I just wish it could have been up to Borat level. 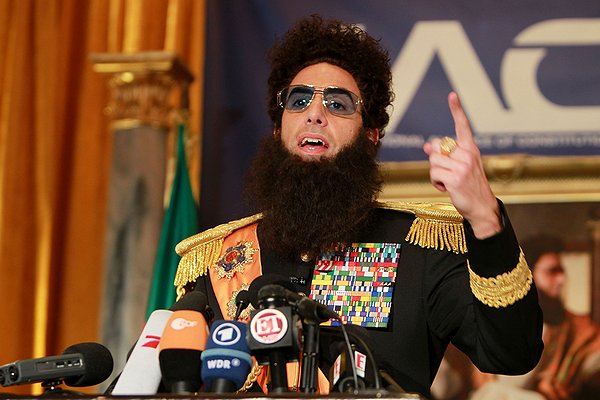 “The Dictator” – Review by Christian Becker

The Dictator Review by Christian Becker I won’t say I’m a fan of Sacha Baron Cohen, but I do respect the way he does comedy and I enjoy the way he pushes the envelope when most people are afraid to. He shocked the world with the politi...
0
Average User Rating
0 votes
Please sign in to rate.