A new trailer for The First Purge was released, and it looks intriguing. It’s the fourth movie in the franchise and a prequel to boot, explaining how the Purge was conceived and what went down that first night it commenced.

The original Purge was a runaway hit in 2013. The horror story centers on the concept that for one night a year in the U.S., anything illegal is permitted, including murder. The film posits that allowing people to release their inner psychopath for one 12-hour period has reduced the overall crime rate. But one affluent family, who usually gets through the Purge unharmed behind their fortified home, are terrorized by a group of young people wearing masks after they take in a potential victim running for his life. Starring Ethan Hawke and Lena Headey, it is an effective and self-contained thriller.

The inevitable sequel The Purge: Anarchy came out the following year and focused on those less fortunate people trying to survive the night on the streets of Los Angeles. It was equally as affecting because it showed the other side of the coin and introduced the idea that government baddies were behind the whole thing. It also showed how there has been a growing rebellion against the Purge. 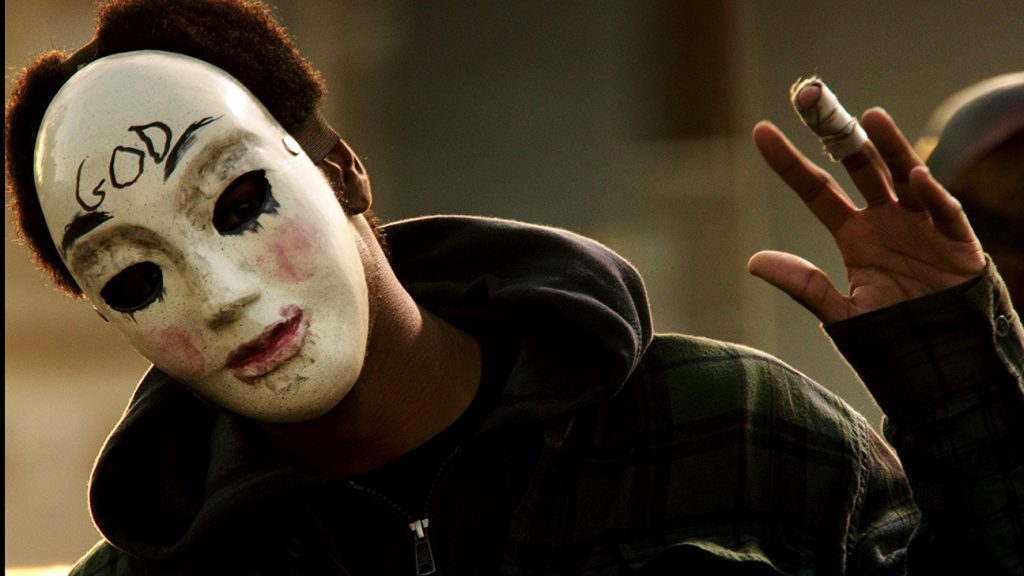 By the third installment, 2016’s The Purge: Election Year, the corrupt government idea is full-blown, as a presidential candidate (Elizabeth Mitchell), poised to win the election, promises to get rid of The Purge once and for all, which puts a huge target on her back during what probably is the last Purge. The concept starts to wear thin in this one and isn’t as terrifying. Plus, the film was released just after the horrific Pulse nightclub mass shooting in Orlando, so the film didn’t do quite as well as the previous two.

Now we have the prequel with The First Purge – and one feels a bit of trepidation about it since anti-gun protests are currently (and rightfully) at an all-time high. The official synopsis: “To push the crime rate below one percent for the rest of the year, the New Founding Fathers of America (NFFA) test a sociological theory that vents aggression for one night in one isolated community.  But when the violence of oppressors meets the rage of the marginalized, the contagion will explode from the trial-city borders and spread across the nation.”

In watching the trailer (which you can above), here are some of my reactions:

1. It starts off with nice touch recapping the other movies. Ethan Hawke tells us, “Tonight allows people a release from all the hatred and violence that they keep up inside them.” Then its Anarchy‘s star Frank Grillo, driving around, looking to avenge his son’s death from a drunk driver, “This won’t bring him back. It won’t make you feel better.” To finally, Mitchell saying, “It is a night defining our country.” Now, let’s see “how it all began.” A little chill through my spine.

2. Then naturally it goes to the urban neighborhood, where there are already protests from the African-American community, chanting “Do not Purge!” The battle clearly is going to be on the streets once again, which is probably the best place to set this, even if we’ve seen it before. The difference here is that it looks like badass gang members are going to get involved and protect their own, so yeah, it’s probably going to get intense.

3. So Marisa Tomei is the one who started this whole thing as a “psychological” experiment? She looks very professional in this, and as she says, “Human nature does not apply to laws of politics.” Then after she realizes this has become a political thing, she asks, “What have I done?” Opened up Pandora’s box is what you did.

4. Oh, and the masks have changed. Now they look more like a messed-up cross between a gas mask and… well, hard to describe with that giant hole where the mouth goes. I mean, what IS that? There’s also the horned-devil-skull mask. At least they keep that scary Purge tradition ever changing.

5. Bottom line to this is we know the Purge succeeds and only grows more dangerous and corrupt as time progresses. So it’s not going to end well.