Plot: A father goes under cover for the DEA in order to help reduce his son’s prison sentence.

SUMMARY OF THOUGHTS: While Snitch is slow and generic at times, it features strong acting, good character development, and an interesting story — making it a better-than-expected drama.

Not terrible, but not that good either. I would have rather seen a more gritty and realistic R-rated film or documentary on the subject. “The Rock” is good in it.

“The Rock” has made some good movies and some bad ones, and this one is definitely the former. He himself is very good in the movie, though I felt Jon Bernthal stole the movie. The movie is very character-driven and it is always interesting. Some of the action is directed poorly — with the use of shaky cam — but the final chase was very well done. One of my favorites so far this year; highly recommended.

“The Rock” proves yet again that while he has indeed picked some terrible movies, that he can still act alongside a great supporting actor (Jon Bernthal) in a movie that, although looks like a straight-to-DVD film, kicked ass.

This is the first legitimate film of 2013! This character-driven drama excels in the categories of acting and emotional investment. While the screenplay and plot are rather generic, Jon Bernthal and “The Rock” carry through genuinely with their upper tier performances for a February release. If you get the chance, check this out! And don’t expect a whole lot of action, for it isn’t necessary (thankfully)!

This isn’t the action movie that I expected to see from the trailers, and with that being said it turned out  better than I ever expected. There is no denying that Dwayne Johnson definitely has the charisma and personality for acting — and it shows within this film. As for the rest of the film, its story is interesting enough and the direction is surprisingly solid as well. The main problem, however, is the supporting cast — which is rather weak — as well as certain points within the film where it tends to drag. Overall, it’s a better-than-expected drama. 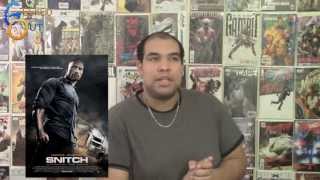 It’s great to see Dwayne “The Rock” Johnson making a movie where the plot and story development overpower the action and explosions. Now don’t get me wrong, I love me some action movies but it’s just nice to see it when an action star goes for something a bit more complicated. So with great story development, pretty good acting, and some good dramatic moments, Snitch gets my highest praise and recommendation for an action flick.

This has great acting from Dwayne Johnson, along with a great supporting role for Jon Bernthal. The second half of the movie shines with a great highway chase scene that is very suspenseful. However, the movie suffers from a forgettable first half. But once the second half comes the film picks right up. Overall, it’s a good crime/drama/thriller.

“The Rock” gives a good performance in Snitch, but Barry Pepper and Jon Bernthal outshine him in their supporting roles. The movie does a fine job at balancing its crime drama and family melodrama elements, and it features strong character development. This is an entertaining drama, but it is quite forgettable.

An interesting story that delves into the dark and dirty drug world. Dwayne Johnson and Jon Bernthal both give great performances and their characters are given a good amount of depth. This has an emotionally engaging story that never takes the backseat to action.