Charlie (Logan Lerman) is a social outcast who is extremely intelligent and passionate about the world of literature. He is entering the strange and often complex world of high school with no friends and several dark secrets that have been haunting him ever since he was younger. Charlie soon becomes friends with Sam (Emma Waston) and Patrick (Erza Miller) who gladly accepts him as part of their own “island of misfit toys.” The three friends soon learn each other’s secrets and work through all life’s struggles to help one another survive high school.

For those who may be unaware, “The Perks of Being A Wallflower” is based on a book that was published in 1999. The book had a big impact on teenagers at the time of its release and after seeing the film, I can totally see why. For once in a rather long time, I felt like I was watching a film about teenagers that actually depicted teenagers in a realistic light. With so many films nowadays showcasing teenagers as drunken horny stereotypes, it is a breath of fresh air to see a film that shows the real struggles and emotional issues facing teenagers.

Logan Lerman steals the show as Charlie. In “Perks,” Lerman plays the character Charlie with real heart and conviction. This character is one that I really connected to and his story was both realistic and powerful. When Charlie is shown at the party near the beginning of the film, it feels real and captures a presence that very few teenage dramas capture. In this scene, Charlie admits that his best friend killed himself and yet he just continues talking and trying to interact with those around him. This lack of emotion within Charlie only sets the audience up for the other secrets Charlie has within him that will be revealed later on in the film. Besides Lerman, you have two really great supporting roles; Ezra Miller as Patrick and Emma Watson as Sam.

I first saw Ezra Miller last year in We Need to Talk About Kevin and I was truly blown away by his performance. In this film, Miller plays a different kind of teenager; he plays one that yearns for attention. Patrick is without a doubt the scene stealer throughout most of the film due to comedic side of the character, but I personally enjoyed the character because of his back story. Patrick on the surface seems like the silly class clown, but as the film progresses you see that he is only hiding behind those jokes. There is a point in the film where Charlie and Patrick bond while driving and Patrick begins to admit he has his own set of issues. This moment within the film made me feel that a lot of people can connect with Patrick. I personally know a lot of people who tend to hide how they are feeling behind jokes and humor. Patrick showcases this throughout the film and ultimately proves the point that while it may work for a while it does get to a point where you need to let someone in to vent or help.

As far as Emma Watson goes, I personally felt that her character is one that a lot of females can connect with. As Sam, Watson plays a character who thinks very little of herself. She lets guys take advantage of her and deep down she seems to be disappointed with her own actions. Again like Patrick and Charlie, I personally have known a lot of women and even some men who think of themselves like Sam does in the film and lets not forget to mention have made similar mistakes. It is also refreshing to see Watson play another role outside of Hermione Granger that gives her a chance to show off her acting talents and prove she’s not just a one trick pony.

It should be said that this film adaptation is written and directed by the book’s author Stephen Chbosky and from what I understand it’s extremely loyal to the book. After learning how loyal the film is to the book, I began to wonder if more books turned into feature length films should be directed by their authors rather than a director who isn’t as close to the source material. The problem, however, is that it could just be a fluke that Chbosky actually captured the story as well as he did on film. It’s hard to say, but could be an interesting experiment. Regardless, Chbosky captures these characters with real depth, angst, and honesty. There are so many powerful moments within the film that are capture real events that teenagers actually go through. It also must be said that with some bigger names a part of the film such as Paul Rudd, Joan Cusack, and David Schwimmer it’s nice to see that Chbosky used them wisely and didn’t just use them for their “star power.”

In Conclusion, “The Perks of Being of A Wallflower” is a really powerful and relatable film. It not only portrays its characters in a realistic light, but addresses and deals with serious issues that a majority of teenagers go through. Its cast is perfect and the performances are dead on. I truly believe that anyone who sees this film will find a little bit of themselves within one of the main characters of this film. This is a terrific film with realistic yet likable characters. I highly recommend seeing this film and feels it reaches far past its targeted teen demographic. This is one of my favorite teen films to come out of a major studio in years!

MovieManMenzel’s final rating for “The Perks of Being A Wallflower” is a 8.5 out of 10. 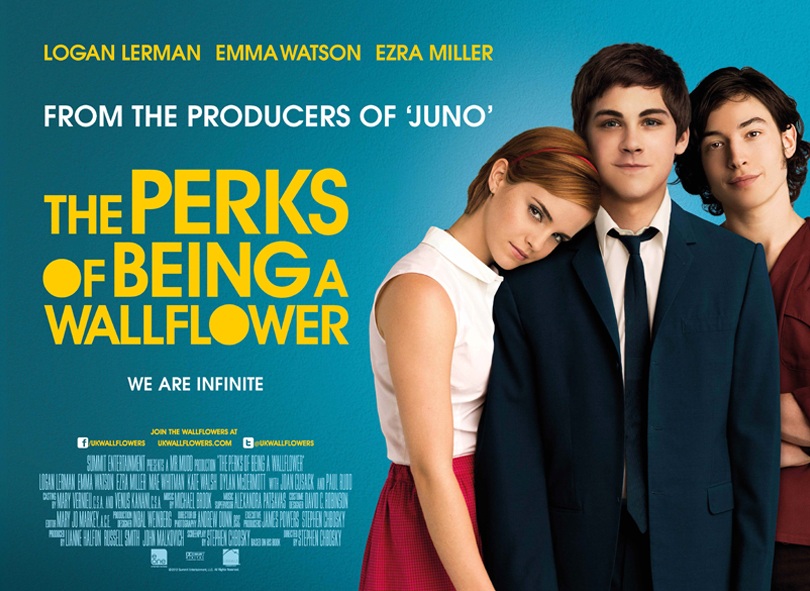 TIFF 2012: “The Perks of Being A Wallflower” – Review by MovieManMenzel

A heartfelt film that portrays teens as real people rather than stereotypes Charlie (Logan Lerman) is a social outcast who is extremely intelligent and passionate about the world of literature. He is entering the strange and often complex...
0
Average User Rating
0 votes
Please sign in to rate.