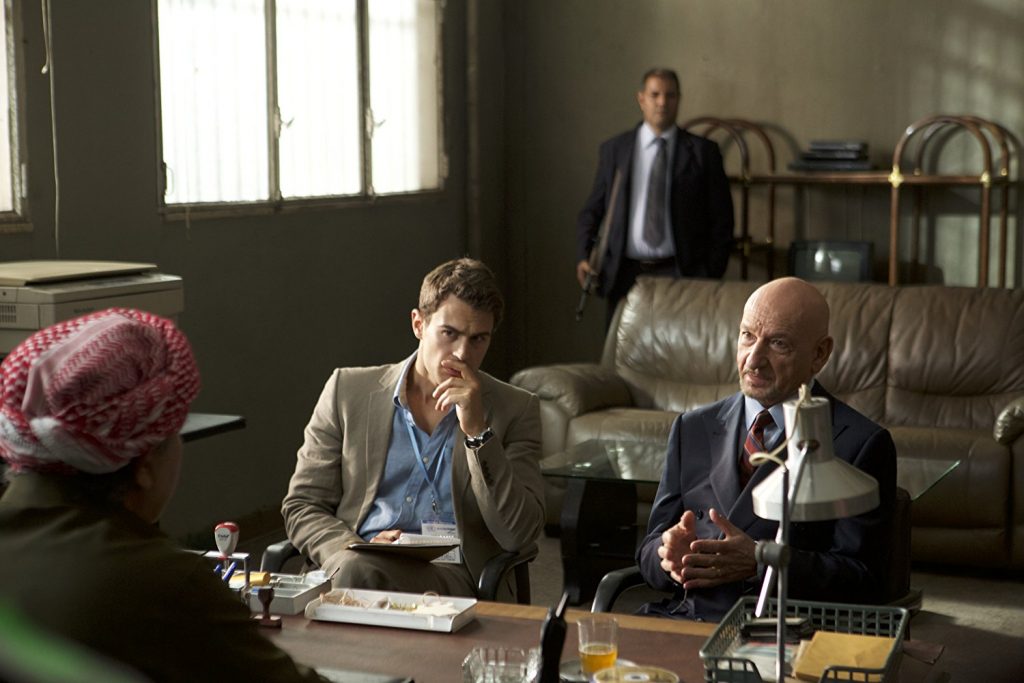 The political thriller Backstabbing for Beginners tells a true story about corruption in the United Nations and the idealistic junior diplomat who blew it wide open.

Based on the book Backstabbing for Beginners: My Crash Course in International Diplomacy by Michael Soussan, the story centers on Michael (played by Theo James), who lands what he thinks is his dream job at the U.N., following his late father’s footsteps. He begins working for the Oil-for-Food Programme, which was set up to supply the war-torn country with much need food, medicine and other supplies after the Gulf Wars.

What Michael quickly discovers, however, is that his predecessor was murdered and that the programme is steeped in corruption at the highest levels, including quite possibly his boss (Ben Kingsley), a man he grows to admire. Michael finds himself in a moral dilemma on whether to expose the backstabbing and risk not only shutting down an important program, which does help millions of Iraqis but also put lives, including his own, in danger in the process.

WLE’s Kit Bowen had a chance to speak with Theo James about playing the real-life whistleblower Michael Soussan and the circumstances he found himself in, along with some of James’ thoughts on the political climate today. Plus, what it was like playing opposite the great Ben Kingsley.

Kit Bowen: I’m a sucker for these kinds of stories like I’m a huge fan of Homeland. I am curious to hear how you became involved in the project?

Theo James: I was sent the script, but then after that, Per [Fly], the director, and I started talking, and we started developing the script and doing another polish. I felt there were certain things that I wanted to bring whilst keeping the integrity of his own message. Then I met Michael Soussan, who the film is based on and inspired by, in New York. We had dinner, and dinner turned into drinks. We just hung out, and I basically picked his brain and listened to him talk.

Bowen: What was intriguing about him?

It’s not only a huge moral decision but also a huge life-changing event. There’s a sadness to that. The movie is a thriller, with an espionage element as you were talking about, but at the end of the day, it’s based on truth. Trying to understand how this made a young man feel and how it affected his life, was very pertinent to me. That was kind of my official way into it.

James: Sort of. He’s very erudite and smart about corruption and how to view it and how to shine a light on it, and how global everything is. The revolt tends to be a revolt against corruption in some form or another, from the French Revolution to the Arab Spring, it’s all a fight against corruption. So, corruption’s a theme and a seam that runs through society. [Michael] is really clear about that.

Interestingly enough, we were doing press today, and someone asked if he would you have done the same thing if you’d had to do it all over again. And he said, yes, he would have done the same thing, but probably not at his age now. Because when you’re 44, you have kids and you have a mortgage, and you have a lot more to risk. A lot of the research shows that whistleblowers tend to be young idealists between 25 and 35. Because, I guess, the hooks of life get into people and that’s why corruption gets quite quickly seeded into business practices because people get more worried or concerned about doing it, which is totally natural. 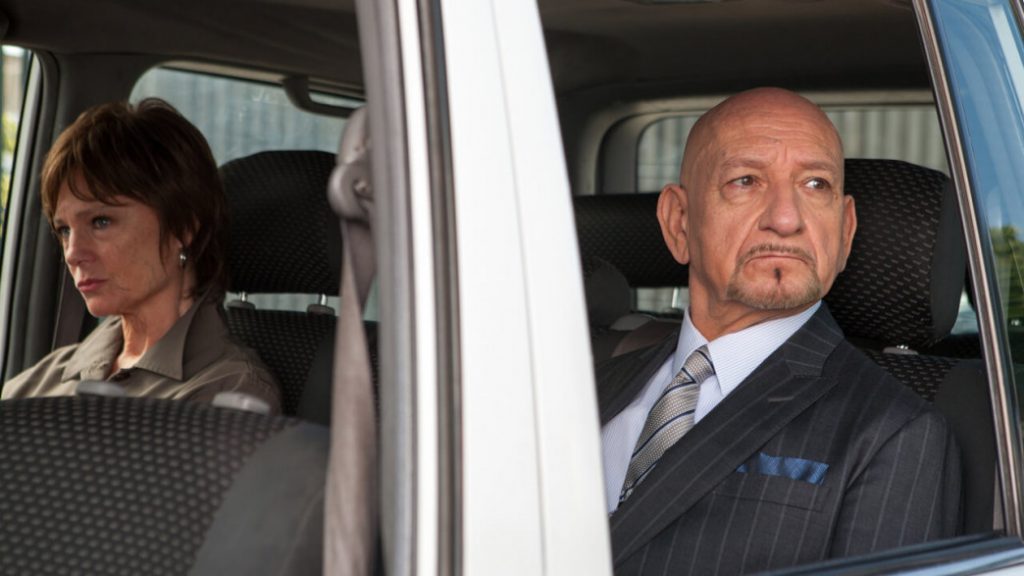 Bowen: What I actually loved about this movie the most is there wasn’t really a clear bad guy. Ben Kingsley’s character isn’t this horrible guy. You totally understood why and where he came from and why he made the choices he made. It’s a very nebulous thing. It felt very genuine that way.

James: That’s true. There wasn’t really a true color bad guy. I think that’s the dilemma. Because at its peak, the Oil-for-Food Programme, 55 percent of Iraq’s population solely totally dependent on the program. So every free piece of food, every pencil, every piece of clothing, they got through this program. This is the UN program of aid.

Pasha, the real Pasha, Ben Kingsley’s character, is thinking small indiscretions and corruption for the sake of the greater good are excusable. The question is how excusable can they be and when do you raise your voice and when do you make it heard. On the flip side, there’s another stance. I think this one is very wild in terms of the money. The Oil-for-Food program had $75 billion worth of aid, through vouchers for oil was only $75 million. $10 billion was redirected straight into the coffers of the wealthy and the powerful. That’s a huge amount of money to just disappear.

James: Where do you stop?

Bowen: Where do you stop? Right. How political are you, Theo? Do you follow the world climate?

James: I would say, I’m fairly tuned in, yes. I always have been. This is why a story like this was interesting because not only is it an interesting story and again a story that I didn’t know much about. You were saying your husband knew about it, but it’s not like it was big. It’s not like the Heathrow scandal. It’s not like Clinton and Monica Lewinsky, who kind of came and went and died. But it was a huge, huge, huge scandal.

What I found also interesting about it in terms of becoming greater, the greater political message or at least the political history is Oil-for-Food was the program used post-second invasion by junior Bush and Tony Blair in Iraq, to kind of rebuild the country. That was the idea. In a way, the whole Oil-for-Food program coupled with the first Gulf War and then obviously Blair and Bush and some of the other allies going into Iraq, that was the architect of the problems that we’re having now in the Middle East. ISIS filled the vacuum of a completely broken, structurally broken country. It’s so relevant. I didn’t even realize how relevant it’s been since I started doing the research.

Bowen: Did you find the research a tad overwhelming?

James: Definitely. Overwhelming and then sad in the sense that collective memory is so short. This was 2003. It’s not really that long ago. It’s been 15 years, and it’s almost forgotten and some of the same mistakes are being made, not in the UN, but in terms of the way the Middle East is handled and so forth. It’s a lot to take, but also I feel like it’s very pertinent to the culture we’re living in right now. Especially in the climate here in America and the concept of truth and then real or fake news, and the institution of the presidency and everything. In Europe, we have the battle of Russia. Russia versus the U.S. Russia killing spies in the U.K. and corruption in the U.K. on the financial market… but I digress.

Bowen: I totally understand. I want to digress to, but I know your time is short. Can you just talk a little bit about working with Ben Kingsley? I had a chance to speak with him once, for House of Sand and Fog, and it was an amazing conversation.

James: Wow. Yeah, sad movie. A really tough movie. He’s a really thoughtful guy. House of Sand and Fog is a good example of the kind of power Ben has, and also the ability to show a certain instability which is riveting and scary at the same time. The surprise, I guess, was that he had that of course, and he’s able to show that. But he also has a warmth and a twinkle in his eye and a kind of a fatherly camaraderie, which was enjoyable.

On top of that, he’s just one of these guys, the good ones. They know their stuff and come prepared and ready to make changes or to create something interesting or tackle hard scenes. So, it was fun. There’s a scene in the movie, where my character, Michael, confronts him in a house about how he’s been manipulated by [Pasha]. It’s kind of [heavy] dialogue scene. That sounds boring, but it wasn’t at all because it was riveting dialogue, but also played opposite a really good actor like Ben, it becomes full and rich and interesting. It was a very pleasant experience.

Backstabbing for Beginners opens in limited theaters this Friday and On Demand on DirectTV.

‘Backstabbing for Beginners’ Star Theo James on Whistleblowers and Politics