It’s a setup we’ve seen a hundred times before — a city-living couple moves out to a remote house in the country that has a dark background. The couple is also already battling their own demons like financial issues, health/mental health issues, secrets, and maybe even some fidelity issues. And it’s these elements that form the basis of duo Shari Springer Berman and Robert Pulcini (the team that also brought us 2003’s American Splendor) latest horror thriller. Although if we’re being honest, it’s kind of light on the horror, even though all the elements are there (i.e., evil voices, big remote houses with a dark past, and even the small-town neighbors who all seem to be hiding something). Based on the novel, All Things Cease To Appear, By Elizabeth Brundage, the film tries to blend horror mystery with art history and religious theory and the struggle between good and evil but, in the end, doesn’t give us anything new.

Things Heard & Seen tells the story of married Manhattan couple George and Catherine who leave their city life and friends behind to move to Hudson Valley, New York, in the 1980s when George gets a teaching position at a small college. Catherine is an artist and art restorer who leaves her professional life behind to support her husband’s career and hopefully alleviate some of their financial woes. But when she arrives at her new home with her husband and young daughter, she begins to suspect that her marriage has a sinister darkness and embarks on a journey to find out the truth about the home’s unfortunate past (with the help of some hidden books, sheet music, and the local historical society). As the house and its previous inhabitants began to infiltrate the couple’s lives and their marriage is tested with infidelity (by the likes of college-aged best friends played by Stranger Thing‘s Natalia Dyer and Colony‘s Alex Neustaedter), George and Catherine’s worlds start to unravel with deadly consequences.

The film starts at the end with a little foreshadowing, but it’s vague enough to not give away just how we got to this point. We’re a little confused yet intrigued to see the turn of events that lead us here. The film opens creepily enough with a slide projector flashing eerie nature paintings in an empty classroom (it has a real IT feel to it) — for some reason, unmanned projectors are always scary. The scene sets us up to think that we’re in for a crazy, spine-chilling ride — unfortunately, it’s more of a slow uphill clunky chug along to a somewhat confounding ending. 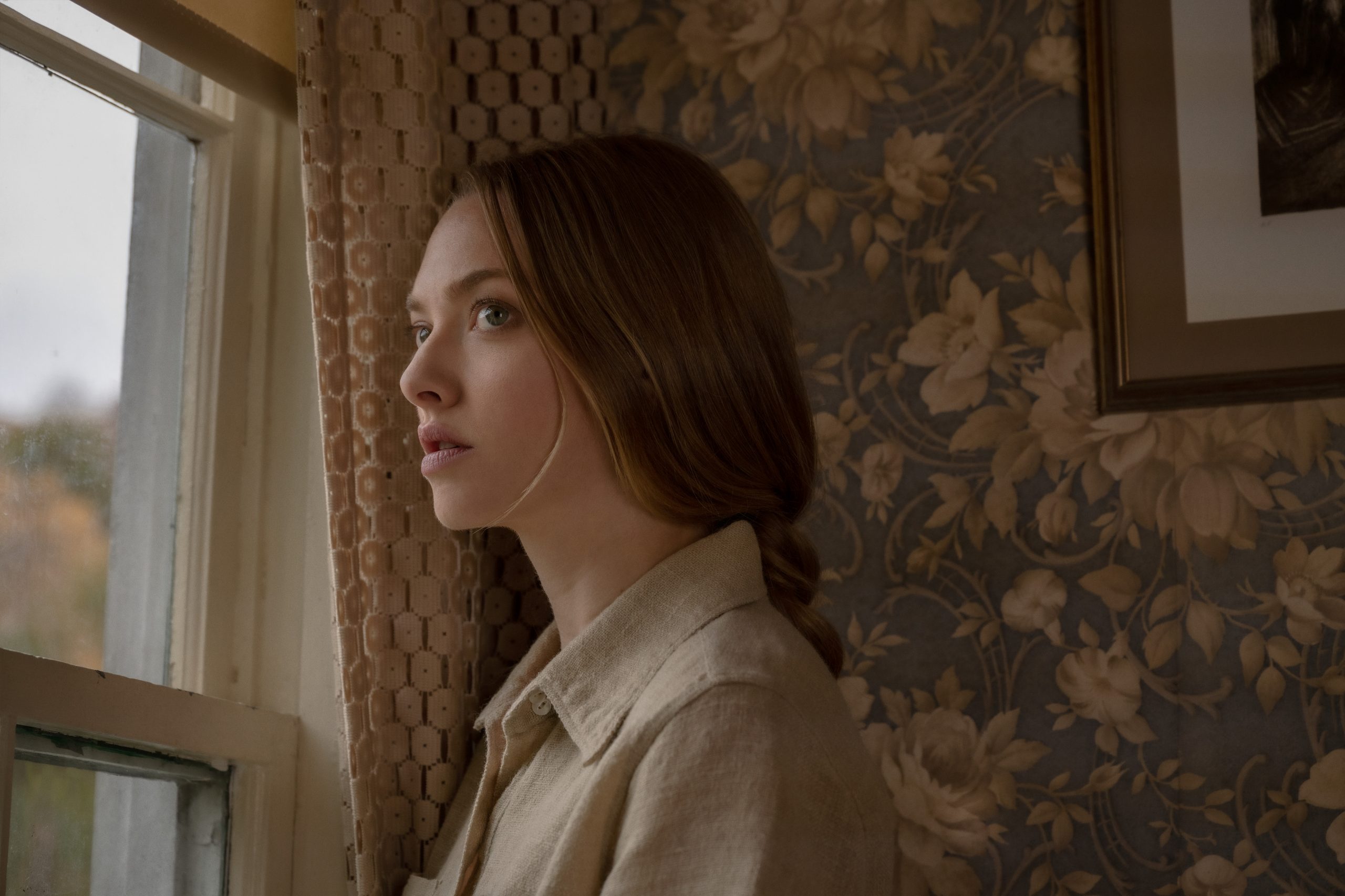 As George’s career seems to take off (with the help of his new mentor/friend Floyd played by F. Murray Abraham) and he begins to grow a cult-like following (not sure why, maybe because he’s comparatively young and cute) of young impressionable students — particularly females — his past begins to catch up with him as he draws the attention of Justine (Rhea Seehorn), a fellow professors wife and fast friend of Catherine. Who is George really — is he as charming and successful as he seems? As more and more of what’s hiding in the shadows come to light, it begins to strain Catherine and George’s marriage — one that was already sexually frustrated and tense — and their relationships with their neighbors and new friends. And it doesn’t help that George is spending more time away from the home while Catherine grows more isolated and alone with just her thoughts and mysteries of this old house.

The film is fairly slow and could use a little help in the pacing department. There are lots of little side plots and stories and ancillary characters who factor into the mystery — far too many — like the town’s obsession with the philosophy and theology of Emanuel Swedenborg (it played a much larger role in the novel, so the filmmakers want to be sure to keep that element in the film). Sure, it brings the art aspect of the film full circle with multiple discussions about a particular painting and Swedenborg’s thoughts on heaven and hell and the afterlife. Still, the film could’ve done without this side story, but I guess it helps to give the film a more sophisticated, intellectual, and philosophical bent than your usual horror fare. But it just comes off as distracting, and it just muddies the waters.

There’s also the standard fare for this genre like the seance and mysticism — can’t forget that. A theme that did work and stand out was the damage that a mediocre white male can wreak when they are selfish and feel entitled to a certain lifestyle like the world owes them that — they hear that little voice saying that they are important and brilliant and deserving of the world at their fingertips and nothing should stand in their way — if it does, eliminate it. And I must say that James Norton plays that smug, douchie husband who has no shame with such aplomb — he just exudes this narcissistic personality. 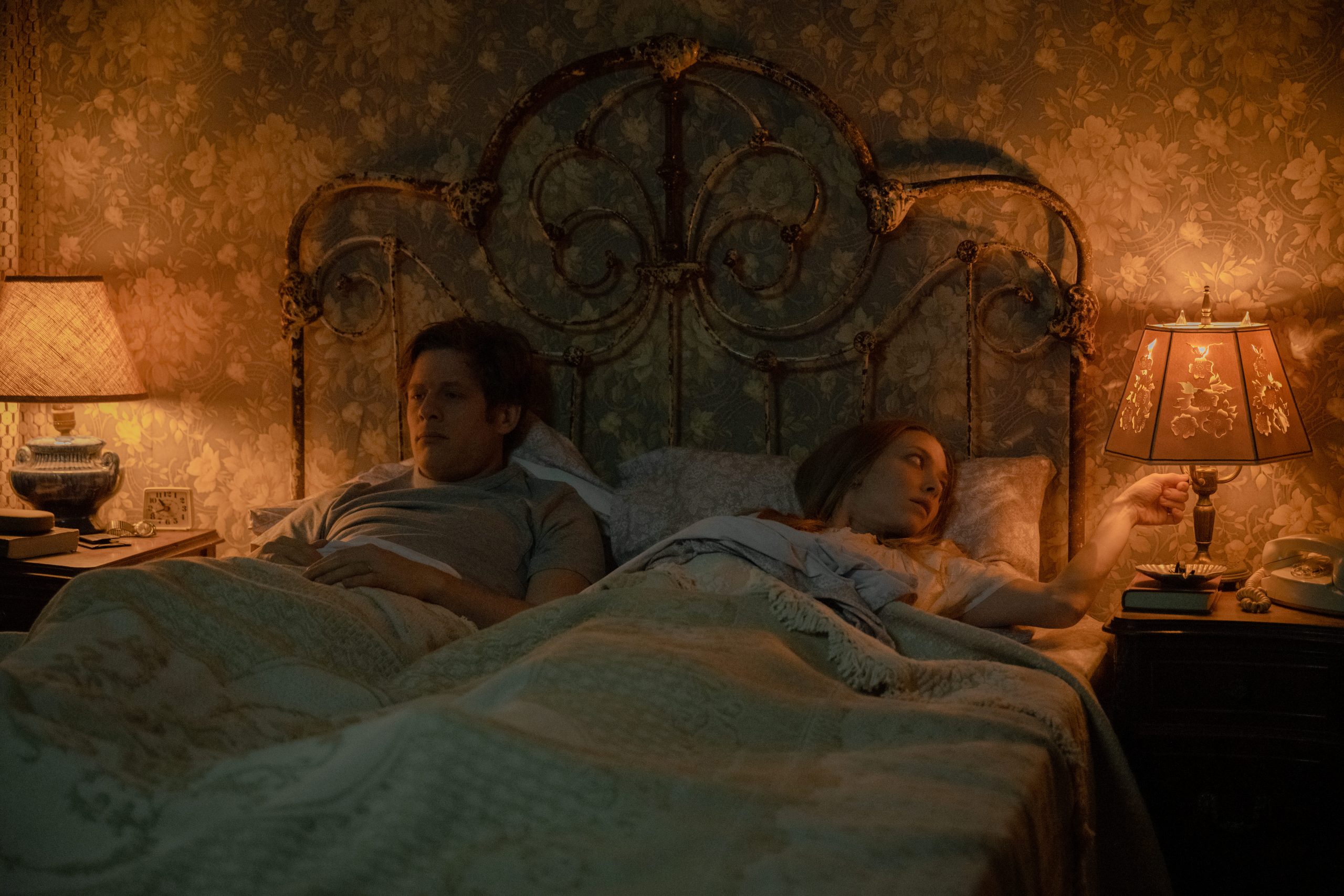 On that note, most of the acting is pretty good, with everyone seeming to buy into this story (especially Seehorn, who brought her A-game), except for Seyfried, whose subdued performance of a woman who is being manipulated and cast as a lonely housewife who’s slowly losing it. But George isn’t the only one hearing voices or being influenced by unseen outside forces; Catherine has an unexpected guardian angel who she and Justine must channel to solve the mystery of the suspicious deaths, disappearances, and accidents that seem to be happening all around George.

Although Things Heard & Seen is a literal slow burn, there are a couple of things that the film does fairly well. As mentioned previously, Norton gives a great performance as a man struggling to hold on to the life he stole as its foundation begins to crumble. The supporting cast is solid. The production design and costuming are spot on — you feel seamlessly transported back to the ’80s. The mood lighting and cinematography were also well done. And I’m always here for a female character standing up for herself and against the patriarchy and the female empowerment undertones and women having each other’s backs. Catherine struggles for independence and agency with an evolving sense of self — something that George struggles with.

In the end, however, it’s just a film with a story we’ve seen so many times before — if these walls could talk, the story this house would tell and to escape it, you have to give voice to its previous inhabitants and let the truth be known — whatever the cost. Your lies will always catch up with you, and you will have your day of reckoning when you will have to suffer the consequences (as we saw in the weird, somewhat off-putting ending). And the title is a little misleading — there aren’t many things seen — as is the tagline. Things Heard & Seen teaches us to trust our senses and our intuition, for sometimes things are not what they seem. 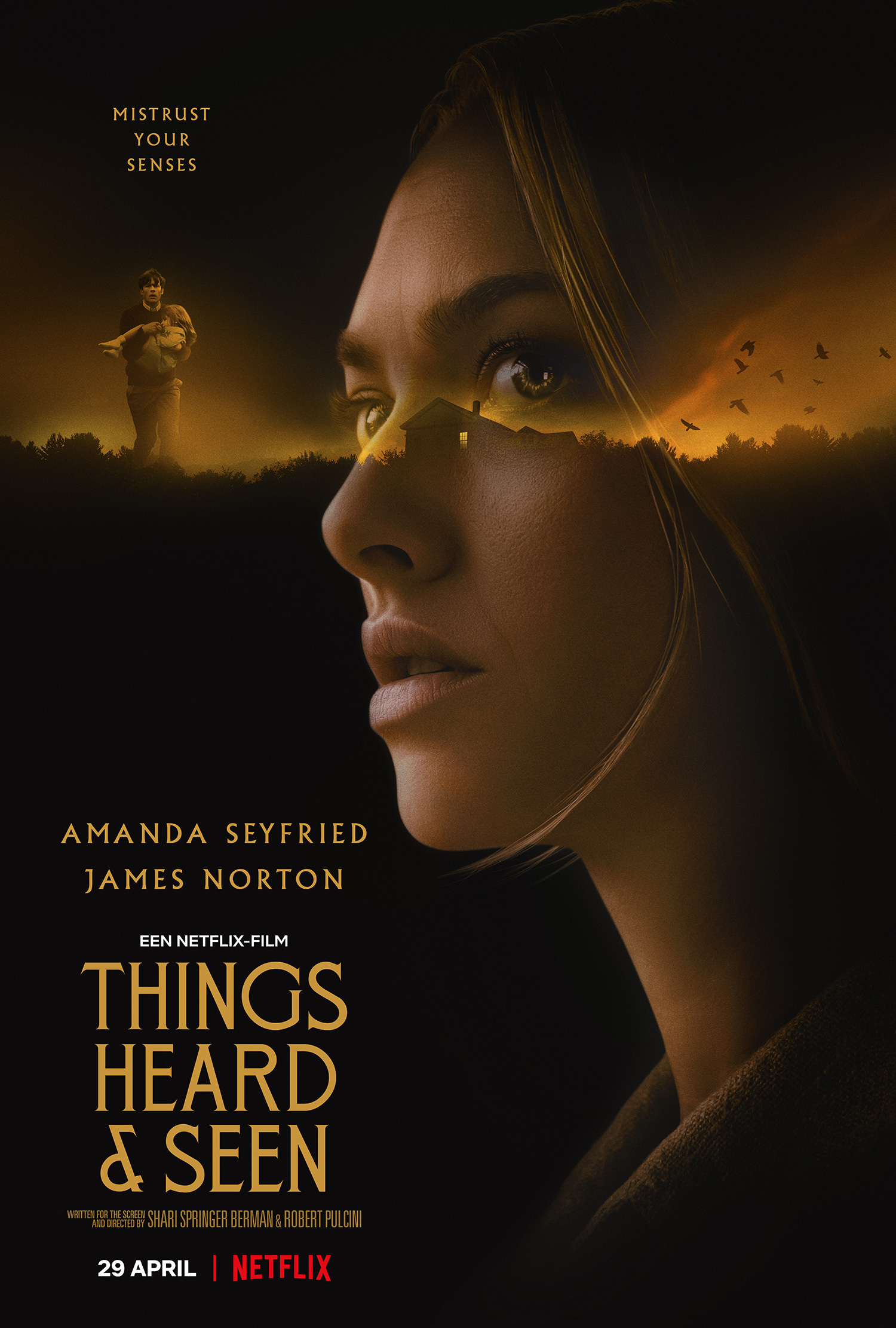 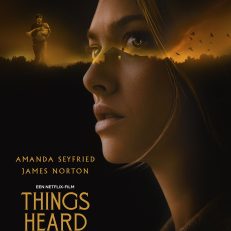 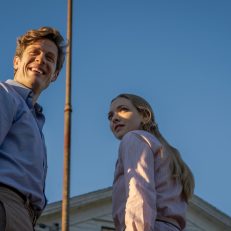 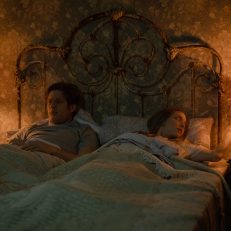 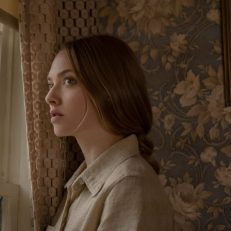