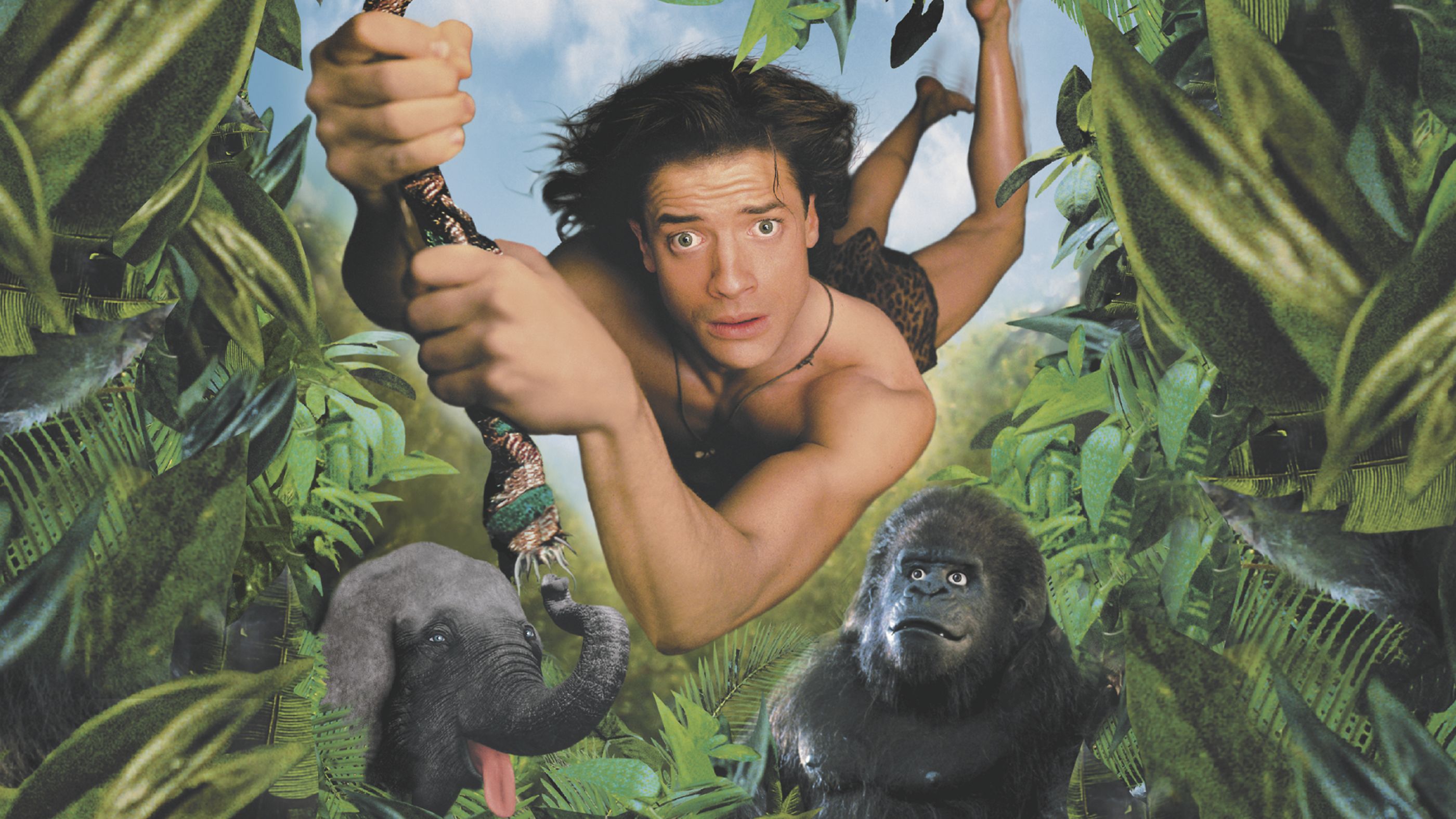 Thirsty Thursdays 97: George of The Jungle

It’s summertime, and the heat outside isn’t the only thing sweating! The year 1997 had several blockbuster movies, but none of them immediately lent thirst credibility. That’s until a little adaptation of a second-tier cartoon put out by the House of Mouse arrived in theaters. George of the Jungle initially premiered as a cartoon created by Jay Ward, the man behind Rocky and Bullwinkle. Meant as a rip-off to the Tarzan franchise the cartoon was short-lived, running for just three months in 1967, yet it gained quite the cult following.

Around 30 years later, screenwriter, Dana Olsen pitched a film adaptation about the dim-witted “King of the Jungle,” attracting Disney at a bizarre period in their live-action legacy. The finished product starred Brendan Fraser as the titular ape-man, with Leslie Mann as Ursula Stanhope, the beautiful heiress who falls for George. Despite lukewarm reviews, the movie was a smash in July of 1997, debuting #2 at the box office behind another Thirsty ‘97 feature, Men in Black.

So how did a movie starring a chiseled man in a loincloth attract so many people? Let’s swing from a vine and, remember, watch out for that tree!

From Encino Man to Man of the Jungle 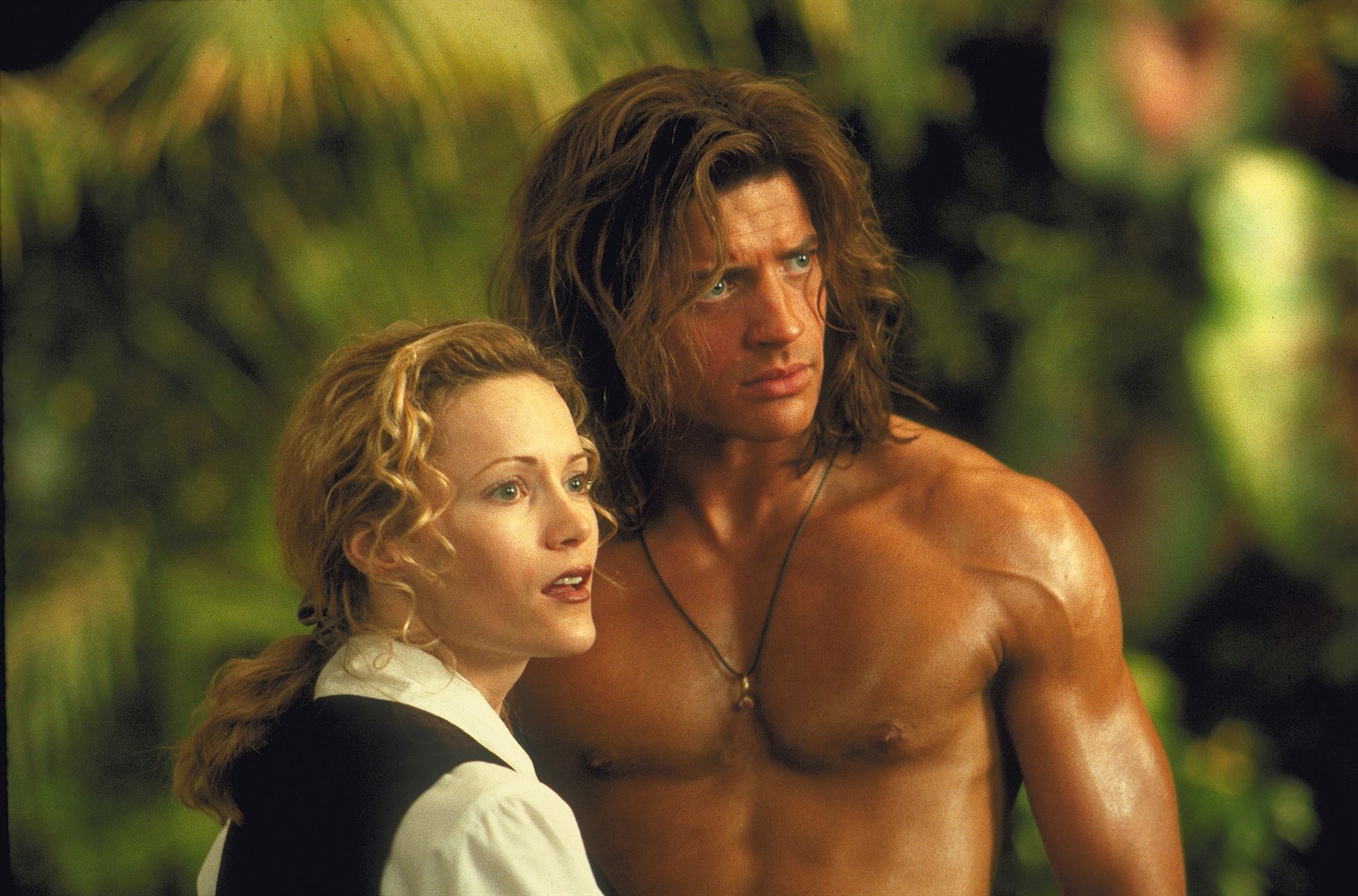 In 1992 audiences got their first look at Brendan Fraser in Encino Man. Similar to George of the Jungle, Fraser played a dimwitted, this time caveman, acclimating to life in the Los Angeles Valley of the early ‘90s. (It’s a Pauly Shore movie so don’t expect too much.) Surprisingly, Encino Man was also a Disney-produced feature, one of several attempts the studio would throw out to capture teenagers attention. Fraser was undoubtedly manic and played dumb well, but it wasn’t a performance you’d consider sexy.

As George of the Jungle, Fraser gives the character, dare I say, nuance. As a character, George is simple, earnest, and entirely without guile. When he interacts with Ursula, there’s a child-like desire to please, and yet George is definitely aware of something called sex (“George having special feelings right now”). In a filmic landscape where men were perceived as he-men and dominating forces, George is non-threatening and sweet; it’s why Ursula is attracted to him in contrast to her selfish, vain ‘90s yuppie fiancee, Lyle (Thomas Haden Church). 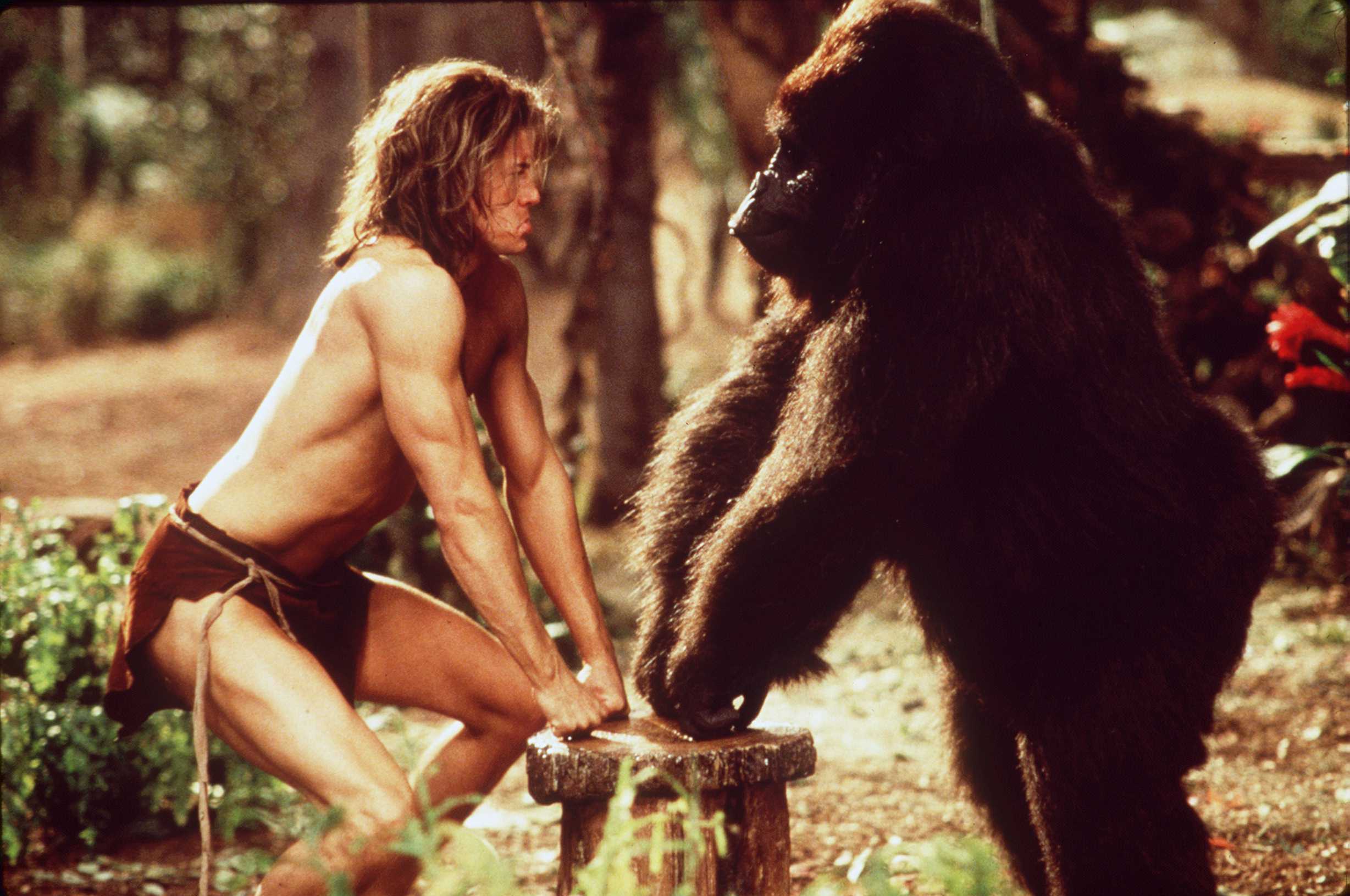 The script, co-written by the late Hate U Give screenwriter Audrey Wells, had to give tweens their first definition of “the female gaze.” George especially is filtered with female audiences’ in mind. Fraser’s chiseled physique is the obvious thing, but it’s amazing how the camera utilizes it. There are several situations where the movie tests the boundaries of Fraser’s loincloth costume, with the character jumping, squatting, and scrambling, which is part of the humor. Even George appears aware of the nudity angle, continually talking about his “buttflap.”

Though the gaze is never completely prurient when looking at George; the film is still aimed at children, specifically. When Ursula takes George home to her “jungle” in San Francisco, the movie takes pleasure in putting George in Armani suits and open shirts, playing on the character’s romantic nature and emphasizing it isn’t just because of his bare flesh. Ursula starts to fall in love with George when he takes the time to hear a small monkey’s cries of being bullied. He protects the weak and downtrodden, a born hero and, more importantly, a good listener.

At one point, Ursula and her friends – all of whom are positioned as sexual beings who don’t need a man to be happy – watch George chase horses. The camera puts him in slow motion, his shirt rippling in the breeze. The scene isn’t just about him being presented sexually, but romantically. He’s one with the horses, kind and considerate to them. The joke is that the men standing behind them only see the horses, thinking that the women’s fascination is just a childish girlie love for animals. 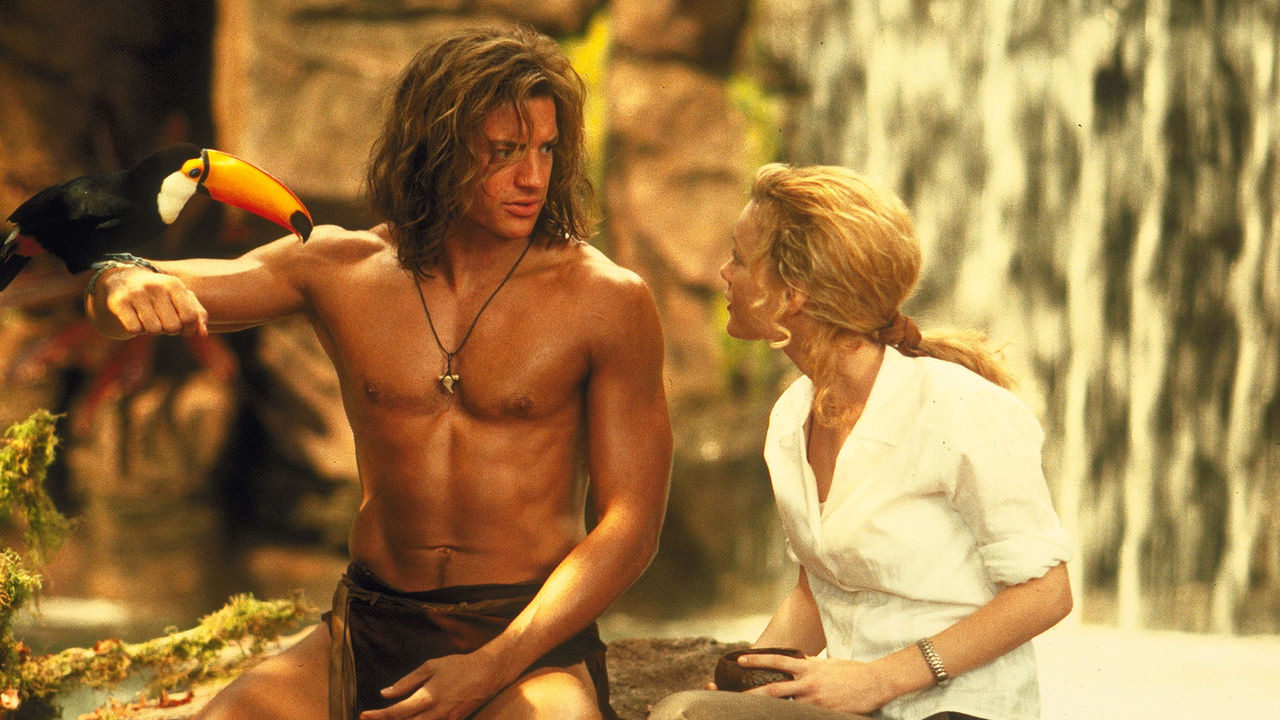 George of the Jungle isn’t just about female lust over a man. It also plays its female heroine into a lusty position. Costume designer Lisa Jensen puts Mann in a series of androgynous clothes that had to leave many young girls confused in 1997. Mann rocks riding boots and vests like she’s a male lead in a Victorian novel. Her hair in the jungle is almost always pulled back. She’s feminine but has that air of masculinity. And George also gets in on this gender-swapping. Upon arriving in San Francisco, he wears one of Ursula’s dresses and pulls his hair up into a feminine style. The sexuality of each character is incredibly fluid and plays on traditional gender roles at the time.

Interestingly, the narrator makes a point of mentioning Ursula’s “conservative views of gender roles” when getting George into more traditionally masculine suits. Based on the phrasing, it seems that Ursula is more concerned about what society will think of George, not necessarily what she’s into (which we can assume are his androgynous jungle duds). 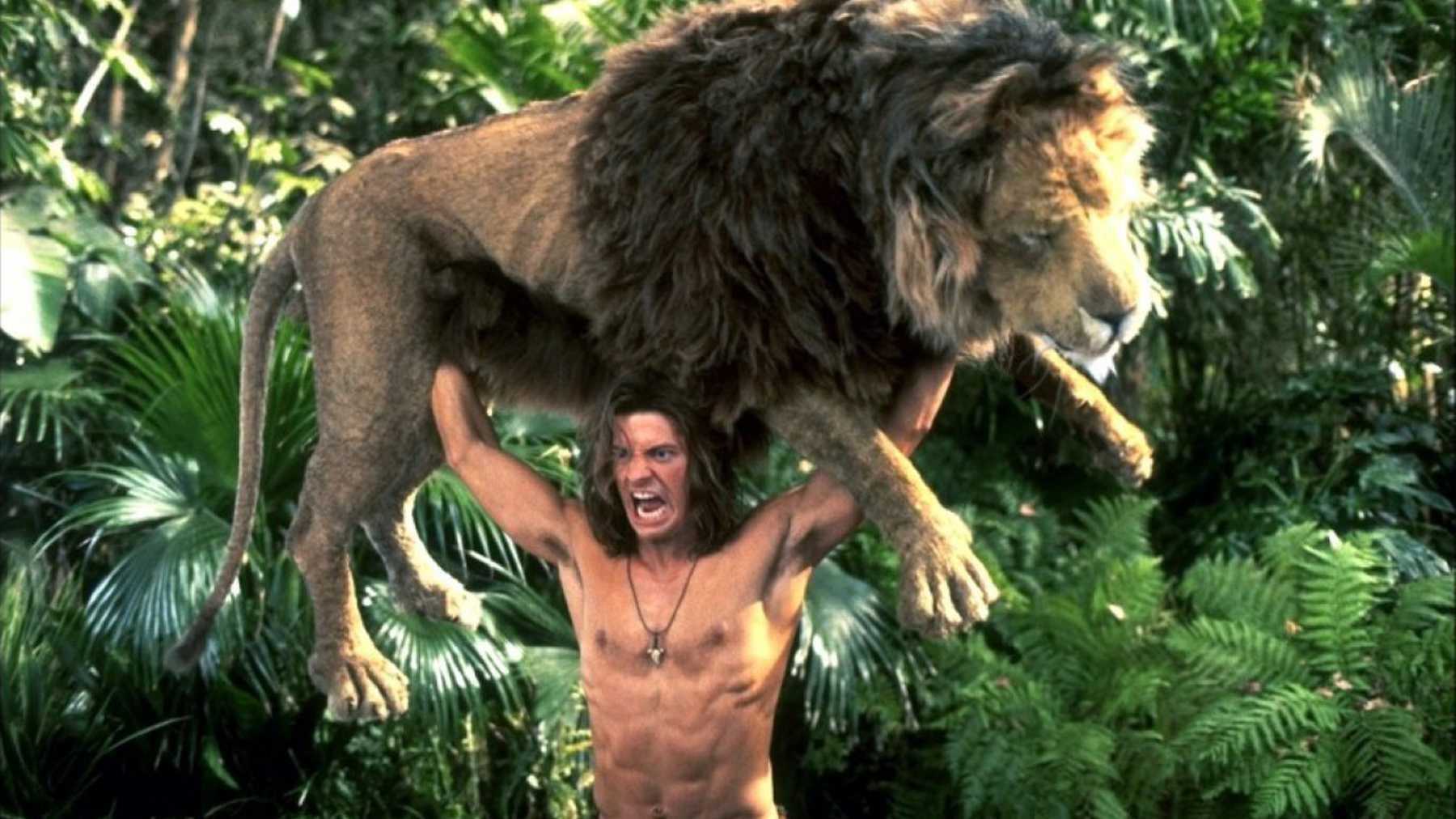 Mann’s Ursula Stanhope is a ‘90s woman, through and through. She wants to go into the jungle alone and is torn between familial duty – marrying a rich man she doesn’t love – and her own personal love for George. Their relationship is built on mutual respect. At the film’s conclusion, when Ursula and George are married, the camera takes George’s POV as he watches Ursula dance and she, later, catches his eye. The movie spends a lot of time just watching them watch each other, enhancing their bond.

Who knew a movie about a jungle guy who slams into trees was able to do so much on the thirst spectrum? George of the Jungle remains an incredibly sweet and underrated romantic comedy. Come for the Fraser abs, stay for the highly mature relationship development.

Thirsty Thursdays 97: George of The Jungle

Thirsty Thursdays 97: George of The Jungle It’s summertime, and the heat outside isn’t the only thing sweating! The year 1997 had several blockbuster movies, but none of them immediately lent thirst credibility. That’s until a little ad...
0
Average User Rating
0 votes
Please sign in to rate.
Cast:Brendan Fraser, Leslie Mann, Thomas Haden Church