Screenwriting and executive producing duo Evan Goldberg and Seth Rogen have been credited for some of the most popular R-rated comedies in recent memory, including Knocked Up, Superbad, and Pineapple Express. In fact, Goldberg and Rogen wrote the first draft of Superbad when they were only thirteen years old. Clearly, the two were destined to be big-time comedy players in Hollywood. It was only a matter of time before they would get their own movie to write, produce, and direct. This project became This is the End, based off the short film, Jay and Seth vs. the Apocalypse. The short film starred Rogen and Jay Baruchel, who both played themselves. In This is the End, they also play themselves, along with new additions James Franco, Jonah Hill, Danny McBride, and Craig Robinson. This self-referential disaster movie spoof fits perfectly with Goldberg and Rogen’s type of humor, but would their improv-heavy style and tongue-in-cheek jabs at each others’ careers take away from the story? Well, you can rest easy now, folks. This is the End will not only please fans of Goldberg and Rogen’s work, but will be one of the most memorable comedies this year.

This is the End begins with actor Jay Baruchel arriving at Los Angeles to visit his best bud and fellow actor, Seth Rogen. Seth has plans to make Jay’s time in LA awesome, starting off by taking him to a party at James Franco’s new pad. There, we run into a plentiful amount of cameos by your favorite comedic actors and actresses (if you have not seen the trailers, continue to avoid them), and all seems to be going fine up until…all hell breaks loose on Earth. Once a giant hole in the ground opens up by James Franco’s house, many party guests and famous celebrities start to die brutal deaths, one by one. The only remaining survivors include Jay, Seth, James, Jonah Hill, Danny McBride, and Craig Robinson. The six must work together in James’ house to figure out how to survive what seems to be the apocalypse. Though once their patience is pushed and egos begin to butt heads, they move closer and closer to their demise.

This is a very ambitious R-rated comedy that might not have worked ten years ago, back when raunchy humor was a bit tamer and the movie would have starred Will Ferrell, Ben Stiller, Vince Vaughn, the Wilson brothers, and Jack Black instead. Goldberg and Rogen had a lot of expectations to meet, and they did not disappoint. The film feels like all the best parts of their comedies: the breaking of the comfort zone, the classic improv riffs, the chemistry amongst the cast, and, most of all, the film’s overall heart and message. The main cast is hilariously clever in playing similar yet unique versions of themselves that separates their public image from their well-written characters. The six actors work together just as well as they do in their past movies, if not better. Though one thing that may shock you, as it is not represented at all in any of the trailers and commercials, is that the movie revolves around a very sweet tale of friendship and forgiveness. The film never wants to be taken seriously, but it still tells a touching story about two best friends whose relationship is put to the test. The movie saves up an epic final act that is both extremely hysterical and heartwarming.

I fear that the directing and writing of This is the End will be under appreciated, since most who see it might say that the film solely depends on its actors and their improv skills. Though Goldberg and Rogen are actually given a project that could have easily gone haywire by forgetting the story and focusing on inside jokes. For a comedy that takes place in one location for most of its running time, Goldberg and Rogen do a great job of making it consistently entertaining. This is the End is part disaster film, part horror film, all satire. The more you think about it, what Goldberg and Rogen have made is quite impressive, and is a clear result of a passion project. Now, I hope I’m not setting expectations too high, because this is still a raunchy R-rated comedy. The scatological humor is all over the place here, and possibly too much. So don’t expect your opinion on these kinds of movies to change. Though for those who have been looking forward to This is the End, you are in for a real treat. The movie promises a lot of laughs and surprises (and believe me, this movie goes places you will not expect), and it successfully delivers. It’s already a huge highlight in this summer movie season. 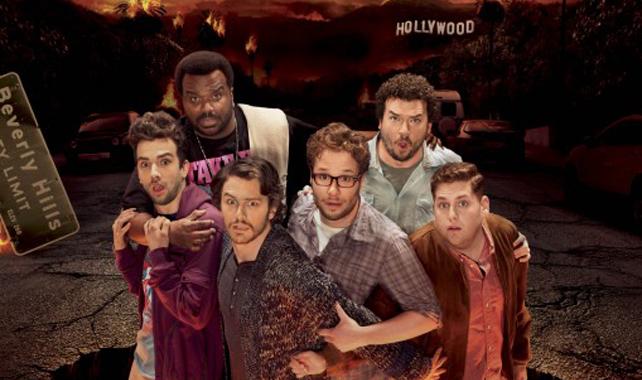 “This is the End” – Review by Delon Villanueva

Screenwriting and executive producing duo Evan Goldberg and Seth Rogen have been credited for some of the most popular R-rated comedies in recent memory, including Knocked Up, Superbad, and Pineapple Express. In fact, Goldberg and Rogen w...
0
Average User Rating
0 votes
Please sign in to rate.