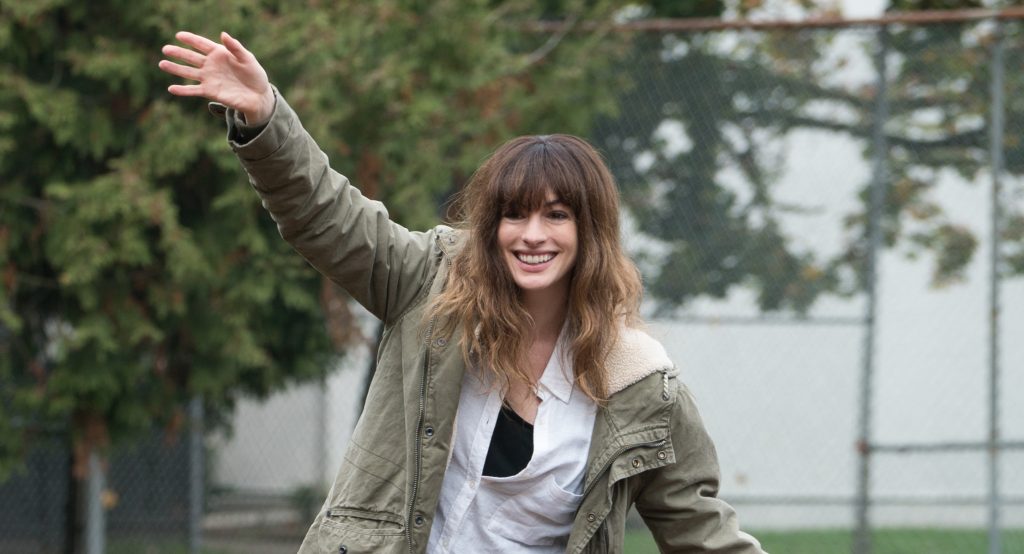 Colossal is a film that I went into not knowing much about. I think that is how the film is best viewed, and will do my best not to spoil too much of the film. Colossal stars Anne Hathaway and Jason Sudeikis as former elementary school friends who find themselves back in the same town again. Gloria was a successful writer in NYC until her bad habits got the best of her, ruined her relationship, and has nowhere to turn. Back in her hometown, she runs into Oscar who is kind and offers her a job at the bar he owns.

Anne Hathaway and Jason Sudeikis are mesmerizing. Their characters have so much depth and emotion with perfect chemistry. Jason’s character, Oscar is particularly deep. His character has drastic changes and emotional scenes that scare you to your core. Anne Hathaway plays a broken woman, struggling with her own inner demons and learning to live without the boyfriend who kicked her out. There is a scene in particular where Anne Hathaway has to fight one of those demons, and she is totally bad ass. The swelling music, her no bullshit attitude and kick-assery are truly inspiring. This is a film with a strong but flawed female lead, which is quite refreshing to see. She is very human and inspiring.

The depth of the themes of the film is astounding. There are so many layers built around relationships and their toxicity, inner strength and fighting inner and outer demons and monsters. In one scene, Gloria tells Oscar she knows what is wrong with him; he hates himself.

Within the serious layers of the film, there is a great amount of humor. There are funny memes, snide, and sarcastic comments and just totally out there lines that take you off guard and make you laugh out loud.

The film excels in editing for sound and visuals. There are parts of the film where scenes we see are mirroring images elsewhere, and they are so precisely shot and edited, that the suspense and emotion they build is palpable. The special effects of the film are really well done and beautiful to watch. The character designs for some of the nonhuman characters is artfully done and spectacular.

Colossal is a spectacle with fantastic filmmaking, storytelling,  performances, and humor. It is beautiful and heartbreakingly raw, while still managing to make you laugh and take a look inward at ourselves. Bravo to Mr. Nacho Vigalondo!