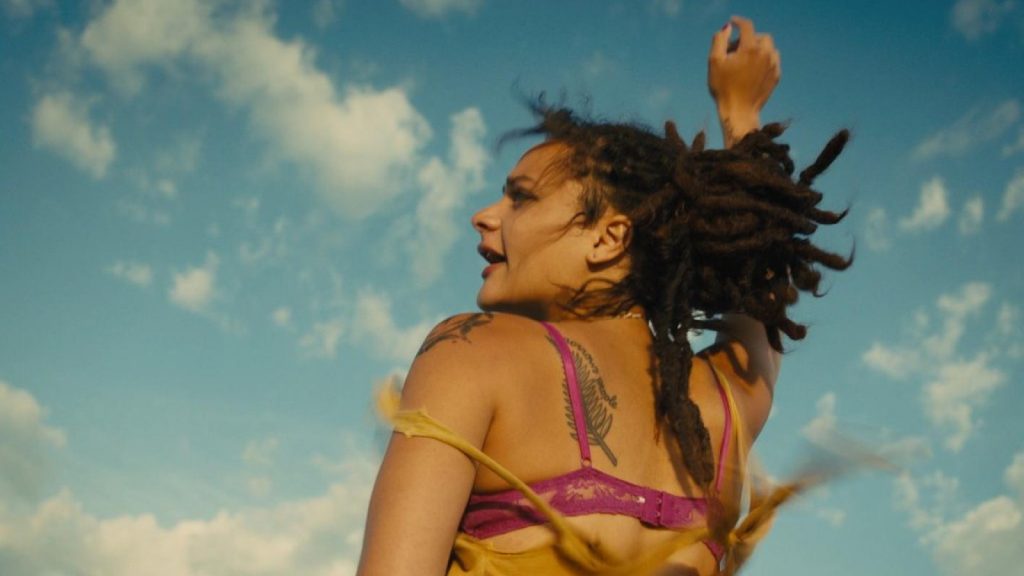 American Honey was a film that I heard a lot of positive buzz about after its World Premiere at the 2016 Cannes Film Festival back in May. I didn’t really know much about the film other than it won the Jury Prize at Cannes and that A24 picked up the film shortly after. Ever since the trailer was released, I have been anxiously waiting to see American Honey and was super excited to learn that the film would be shown at the 2016 Toronto International Film Festival.

Star (Sasha Lane) is a southern girl from Texas who has lead a pretty messed up life. She lost her mother at an early age, and her father sexually abuses her regularly. Star is forced to take care of her little brother and sister while her father comes home expecting a hot meal to be waiting for him by the time he walks through the door. One afternoon, after digging through the trash trying to find food, Star notices a large group of people passing by in a van. She follows the van to a local K-Mart where Star locks eyes with Jake (Shia LaBeouf) who is standing on a counter top singing Rihanna’s We Found Love. It is in that moment where Star falls in love. Quickly realizing that she has nothing to lose, Star brings her sister and brother over to a couple at a local bar. Star claims that this couple is her sister and brother’s real parents and leaves them with this couple. Star runs out of the bar embracing her newfound freedom. The next day, she joins Jake and his group of misfits as they party across the United States and sell fraudulent magazine subscriptions for quick cash.

There is a great film somewhere within Andrea Arnold’s American Honey but the cut being shown at Toronto International Film Festival certainly isn’t it. This extremely bloated and often repetitive film feels like a rough cut of a student film that has yet to be edited. American Honey, which was shot in 4:3 aspect ratio, opens relatively strong with a heartbreaking yet fascinating look into the life of Star and how she desperately needs to escape her hometown. The early scenes between Star and her siblings are somewhat hard to watch because they showcase the harsh reality of what it is like growing up in poverty. The scene inside Star’s house is particularly upsetting because it feels undoubtably real and in the back of your mind that there are people who actually live like that. 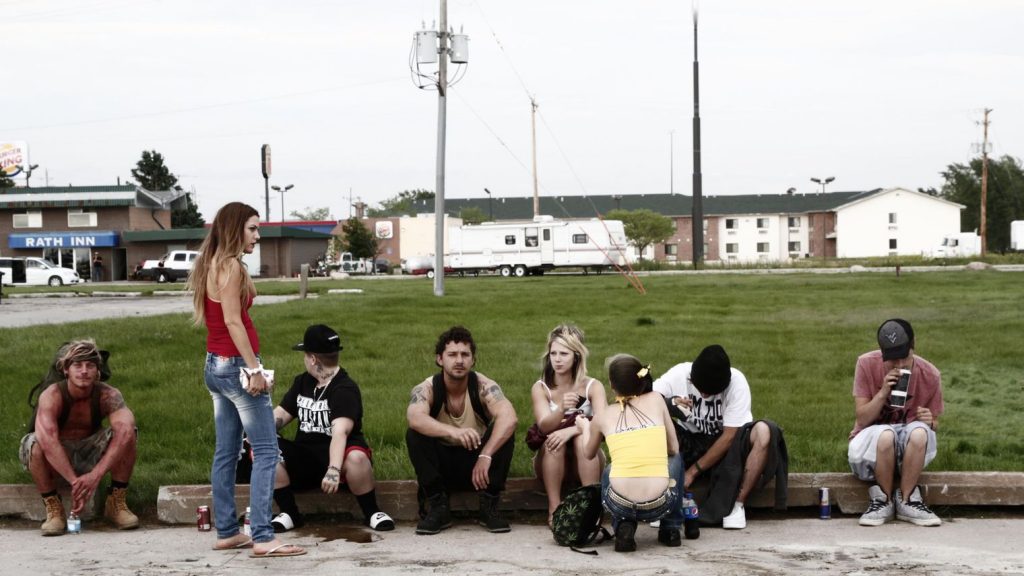 Once Star joins Jake and the gang on the road, the film remains interesting for about 30 minutes before it comes this repetitive loop of the same thing happening over and over again. The gang is shown in the van, smoking, drinking, and singing. They go to a crappy motel every couple of nights and sleep. They get up in the morning and get dropped off in a neighborhood where they visit various houses to con people into giving them money for magazines. This is pretty much all that happens for the last 2 hours of the film’s unnecessary 162-minute runtime.

There is a sex scene about every 30 minutes along with a handful of scenes where Star ventures off with various men in an attempt to raise money. There isn’t a whole lot of substance within American Honey, and that’s mainly due to the film’s length. Don’t get me wrong; there are quite a few great moments found within this film and I would even argue that there is at least one great scene every 20 minutes or so. The real problem is that there just isn’t enough of these moments to warrant the film’s ridiculous runtime. Instead of moments that will make audiences relate to and care about these characters, Arnold spends the vast majority of the film showing characters staring blankly out a window, fighting with one another, or singing an entire song while sitting in a van.

What adds to American Honey’s painfully long runtime is that the story never quite goes anywhere. We understand very early on as to why Star wants to embark on this journey yet she doesn’t learn from her actions nor are we given any real reason to care about her as a person. I understand that this is a story that is “grounded in reality” but you have to give me a reason to care. What makes this even more upsetting is that Sasha Lane and Shia LaBeouf deliver great performances, but they don’t matter as much as they should because the script makes it nearly impossible to care about them. For at least 120 minutes, all you do is see them walk around, have sex, and sing songs in a van. These two actors have such amazing chemistry, but the film rarely takes advantage of that. I wish there were more moments such as the scene where Star asks Jake about his dreams but alas there is not. There simply aren’t enough moments between these two that develop into something that I would deem noteworthy. 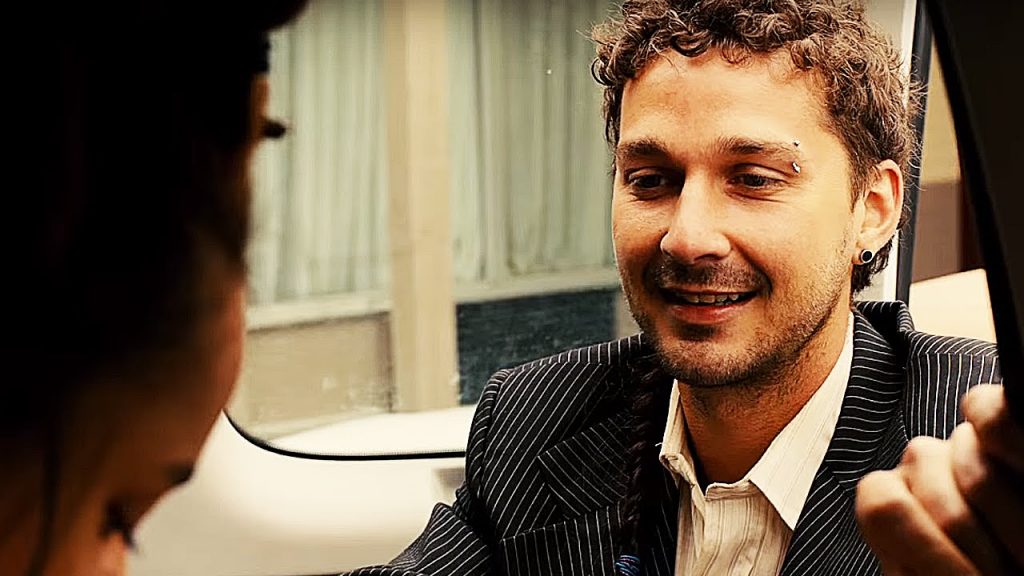 While I was watching the film, I couldn’t help but question how this group of people was being represented. You have this group of 20-somethings going around asking people for money, but everyone looks like drug dealers or gang bangers. If this is supposed to be a realistic look at life, I find it extremely hard to believe that anyone from a wealthy neighborhood would talk to some of these people, let alone allow them to step into their homes and give them money. I couldn’t buy into the idea that these trashy looking people went door to door in wealthy white neighborhoods asking for money and got it. I am pretty sure that most people would call the police if they saw individuals walking around their neighborhood looking how this group looked.

There are at least a handful of closeup shots featuring bugs crawling. These sequences lacked any real purpose other than to give the film an artistic vibe that would hopefully provoke someone in the audience to shout out “that’s so artistic!” while watching the film. Also, why did everyone in the movie seem to have a dog? And why did everyone in this group listen to Krystal (Riley Keough) when she was never shown doing any work? I don’t get a lot of what happens within this story because it lacked development and reason. I spent most of the runtime wondering why I wasn’t learning anything about these characters but instead was shown scenes such as a van full of people singing, I Don’t Fuck With You by Big Sean and E-40.

All negativity aside, there is no denying that Andrea Arnold has an eye for filmmaking. The 4:3 aspect ratio gave the film a unique and personal feel. The visuals are stunning, and I loved that the film was shot mostly using natural lighting. One scene that stands out among many others is a sequence between Star and Jake sitting on the roof of the van while it’s in motion. I think this sequence was so beautiful to the eye. There are several other great close-up shots especially ones displaying Star or Jake’s emotions. There is a scene about 15 minutes into the film where Star is dancing with her father, and she begins to cry. This moment is heartbreakingly beautiful and emotionally powerful. 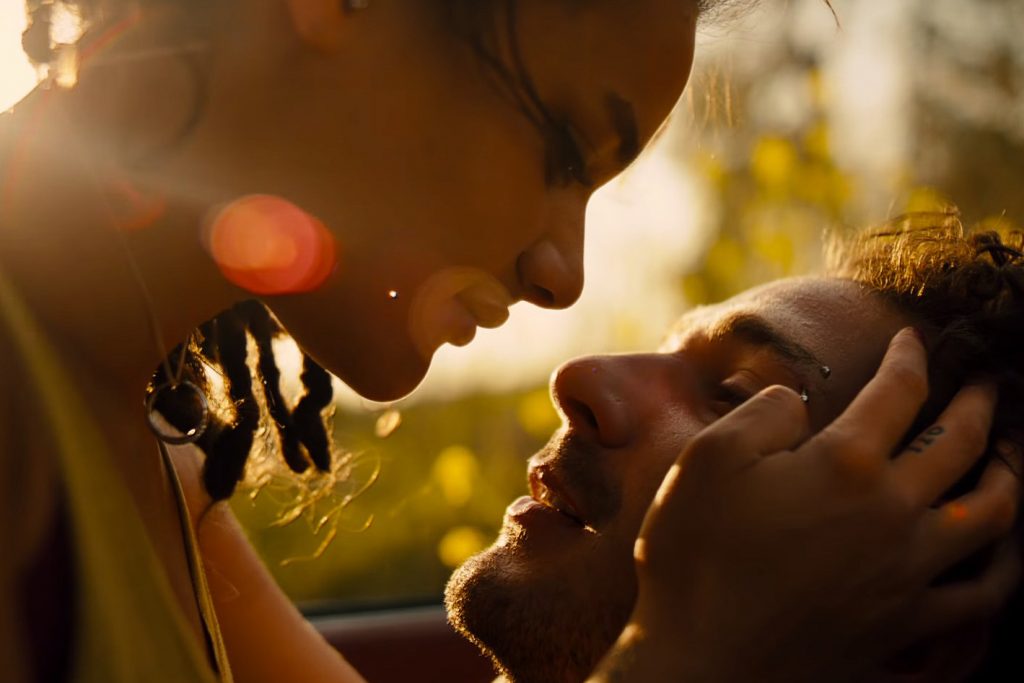 After viewing American Honey, I do not know who this film is speaking to nor do I foresee anyone who isn’t a die-hard film aficionado being able to sit through the film as is. I noticed at my screening that many journalists around me were antsy and kept getting up and walking in and out of the theater. There were several people whispering things to their friends and uninterested with what was actually happening on-screen. As a lifelong film lover, there is nothing worse than spending almost three-hours of your time watching a film that feels completely pointless by the time the credits begin to roll. I have no idea what Arnold was thinking when not editing the film down to a reasonable under two-hour runtime. I am equally baffled that A24 didn’t cut this film before showing it again to a large public audience.

American Honey could have easily been a great film but only if it was about 90 minutes shorter and focused more on Star and Jake rather than repetitious scenes that added nothing to the story. There are moments of greatness sprinkled throughout, but these scenes are overshadowed by a tedious story, bloated runtime, and jarring soundtrack. There is no question that the film is visually stunning, and Lane and LaBeouf deliver great performances. American Honey isn’t a bad film but rather a misguided one. With some better editing and a stronger focus on its core characters, I truly believe there is a great film within this film just waiting to be found. I don’t know if we will ever see that film, but I certainly would like to see it. Maybe A24 can release a reverse directors cut where the film isn’t longer but rather shorter when it lands on Blu-Ray and DVD sometime within the next few months.

Scott “Movie Man” Menzel’s final rating for American Honey is a 5 out of 10.