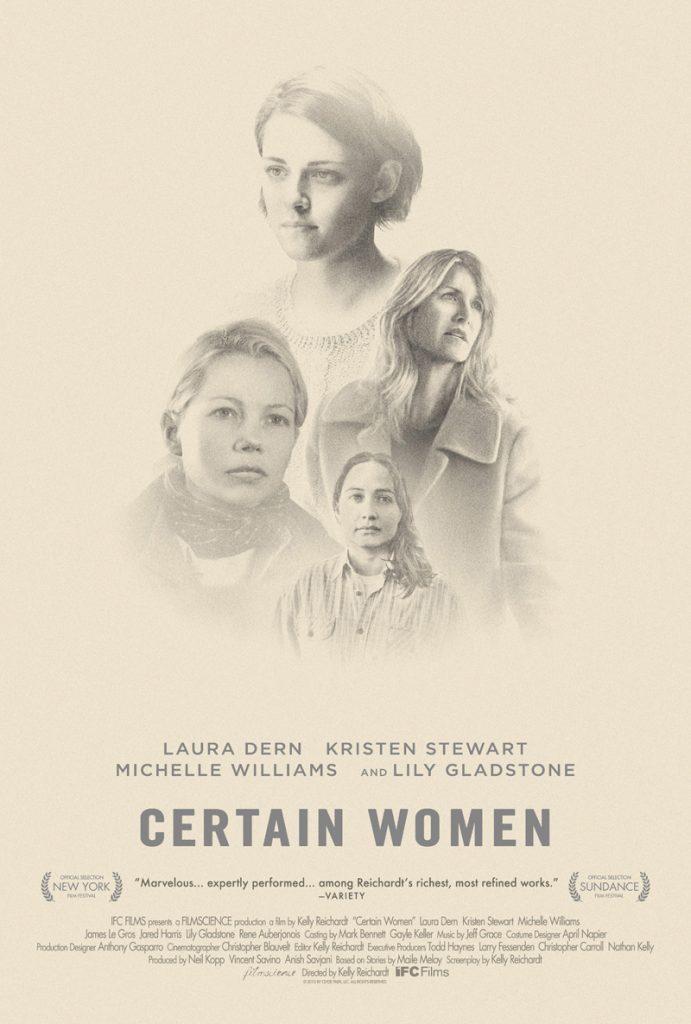 The small, rural town of Livingston, Montana is the primary setting for Kelly Reichardt’s Certain Women, a loosely paced anthology about the lives of three women related to Livingston in some way. Adapted from Maile Meloy’s short stories by Reichardt herself (who also handles editing duties), the film is a devastating look at characters who find themselves defined (or, in some cases, trapped) by their surroundings, who deal with the burden of isolation and gender inequality, among many other themes buried underneath its gorgeous, textured surface.

Part one focuses on Laura (Laura Dern), a lawyer who’s first seen lying in bed after sleeping with a man on her lunch break. Reichardt and cinematographer Christopher Blauvelt, who shot the film on 16mm, frame Laura in a way that emphasizes a feeling of inconsequentiality; her body blending in with the crumpled sheets it lays on, her head appearing disembodied through a reflection on a bland, featureless wall. She goes back to work, where she has to deal with Fuller (Jared Harris), a client hoping to sue his employer after a workplace injury. On paper, this section is the most dramatic of the three stories, with Fuller taking extreme measures once he understands that he can’t sue his employer due to taking a meager compensation payment from them. Reichardt films a standoff that’s so banal it brings the tension to a low, barely there simmer, keeping the story engrossing while never giving off a hint of where it’s going. 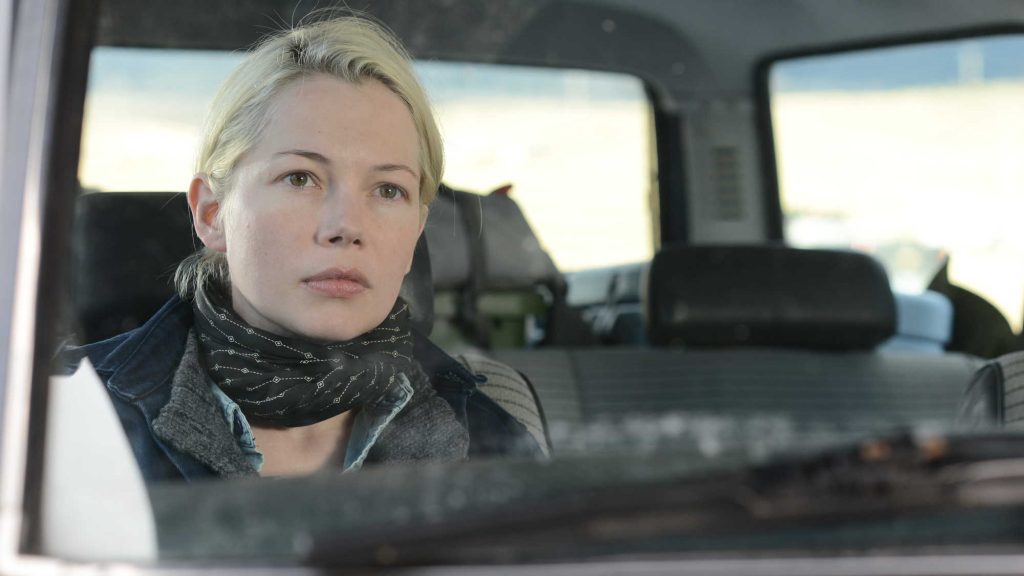 Then, with a single cut, Reichardt switches to the perspective of Gina (Michelle Williams), who’s camping for the weekend with husband Ryan (James LeGros) and bratty teenage daughter Guthrie (Sara Rodier). She’s in the middle of preparation for a cottage she intends to build just outside of Livingston, but she intends to use locally sourced material in order to create a home more authentic to its environment. Her goal for the day is to buy a large amount of sandstone off of Albert (Rene Auberjonois), a widow showing signs of senility. Gina finds herself isolated by men, who delegitimize her at every turn; Albert assumes that Ryan is her boss, and Ryan paints his wife in a negative light when she tries to negotiate a price for the stone. Gina’s story stands out as the most elusive of the three, partly because it’s difficult to place any sort of thematic connection to Laura’s part beforehand. Then again, there’s no reason to assume these two parts should have any connection at all, but the tenuous narrative links (a shared setting and character, to be exact) make it difficult not to look for other mutual factors.

But regardless of how they connect, Certain Women’s stories can all work well on their own, which turns out to be the case for the third (and best) part. Taking place hours away from Livingston in the town of Belfry, an unnamed farm worker (Lily Gladstone) takes care of horses during the day on her own. One night, she finds herself wandering into an adult education class for school law being taught by Elizabeth (Kristen Stewart), a lawyer who commutes from Livingston. The two strike up a sort of tenuous friendship, and Gladstone’s character takes a liking to Elizabeth as they meet after every class for food at a local diner.

It’s this final story that has Reichardt at the height of her career so far, cutting back and forth through the farmhand’s day and night to develop an understanding of how vital her brief meetings with Elizabeth have become. Gladstone, who delivers quite possibly the best performance in the film, always gets framed during her day job that places her as a small blip compared to the empty fields and mountains around her. It communicates the loneliness at the core of this character, and how she has to face the difficult task of letting out her repressed emotions. There’s nothing but emptiness surrounding these three characters, a void that emphasizes their insignificance in the grand scheme of things, and it’s because of this that the smallest of gestures, whether it’s an act of kindness or a modest interaction, can carry the weight of the world. Certain Women a rare treasure, a film filled with so much empathy and sensitivity in its look at the struggle of modest living it can become overwhelming.