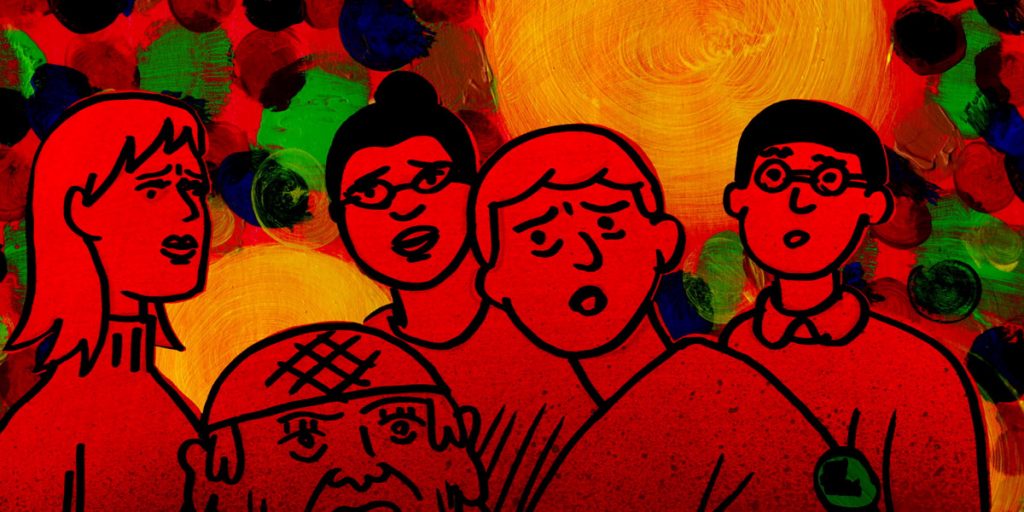 TIFF 2016 Review: My Entire High School Sinking Into the Sea

No one really asked for a riff on The Poseidon Adventure centering on high school drama, but comic book artist Dash Shaw provides exactly that with his directorial debut My Entire High School Sinking Into the Sea, a disaster comedy that doesn’t really inspire much of a reaction. Despite a cast containing names like Jason Schwartzman, Lena Dunham, and Susan Sarandon, the only thing that really stands out is Shaw’s animation due to its lack of CGI. Other than that, there isn’t much to offer in terms of laughs or entertainment, with Shaw’s screenplay falling back on tired material that makes his project feel slighter and slighter as it gets closer to the end credits.

Shaw appears to have some autobiographical elements in his story, as his main character shares the same name as him. Dash (Schwartzman) is about to enter the tenth grade with best friend Assaf (Reggie Watts), hoping that their sophomore year will bring them the sort of popularity and success they couldn’t achieve as freshmen. They work on the school paper with editor Verti (Maya Rudolph), and after their first meeting, a rift starts to form between Dash and Assaf when Verti assigns articles to them separately rather than together. Part of this is for romantic reasons, as Verti has a crush on Assaf, and Dash sees their blooming romance as a threat to his only friendship.

Dash rebels by publishing a paper attacking Assaf and Verti, only to find himself punished by Principal Grimm (Thomas Jay Ryan) who puts it on his permanent record. When Dash attempts to steal his record back to undo the changes, he finds a bombshell: paperwork saying that the school’s new auditorium on the roof violates safety standards since the school happens to be located on the edge of a cliff directly above a fault line. Like all disaster films, no one heeds his warning, and it doesn’t take long before the school plummets into the ocean after a strong earthquake. With everyone’s lives at stake, Dash, Assaf, and Verti must work together alongside students and staff to escape before the building sinks to the bottom of the sea.

If Shaw based his character around his own experience in high school, it doesn’t excuse the fact that the jealousy and fear over potentially losing a friend to romance is archetypical for high school/coming of age films. The attempts to subvert that familiarity, along with other characters like popular girl Mary (Dunham) and gruff Lunch Lady Lorraine (Sarandon), by plopping them in a life or death situation doesn’t do much aside from giving them all an objective to unify over, along with providing Shaw an easy narrative structure, as they have to make their way up each floor to the top. The reliance on tropes makes the characters both literal and figurative sketches, which takes away any weight on the dramatic stakes.

Of course, Shaw’s film is first and foremost a comedy, but on that front, it doesn’t succeed either. Relying on deadpan humor, for the most part, the bulk of the jokes come from the characters’ disconnect from reality, as they continue showing concern over superfluous high school problems without realizing they’re about to die (after all, who cares what other classmates think when they’ve all drowned?). It’s a joke that’s not especially funny, and it runs its course early on. The same goes for a character like Lunch Lady Lorraine, whose biggest moment is a video game type battle between her and a group of threatening students. The comedy is really a matter of personal preference, but where My Entire High School doesn’t disappoint is with its visuals. Shaw and lead animator Jane Samborski’s hand-drawn work creates a dynamic style that finds backgrounds constantly changing including characters’ skin color, putting the emphasis on each character’s sharp, precise outlines. It’s unfortunate that Shaw’s creativity only seems to work with what’s on the screen rather than what’s on the page.