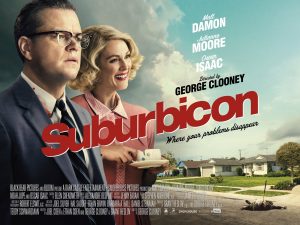 Suburbicon is the latest Coen brothers film directed by George Clooney. Matt Damon plays Gardner Lodge, father to Nicky (Noah Jupe) and loving husband. When a young African American family moves in next door, the neighborhood is not pleased, to say the least. Their perfect little white suburbia has been ruined by this family. After Nicky plays with the young boy, Andy (Tony Espinosa), the family becomes the target of a home invasion. Nicky’s aunt Margaret (Julianne Moore) moves in to help cope with what has happened to their family and put the pieces back together. The rest of the film is spent learning more about the Lodge family and the event that has shaped the rest of their lives. Suburbicon is one of those films that is very difficult to describe without giving away huge plot points, so be aware of reviews for the film that spoil too much.

The film is set in the 1950s and creates an atmosphere that reflects both the hopeful and whimsical nature of the era as well as the ugly and rampant racism running through the country. What a timely message presented in a spectacularly entertaining, funny, and absorbing film. The film is very reflective of the U.S. climate today and doesn’t shy away from the social commentary it so obviously makes about society. 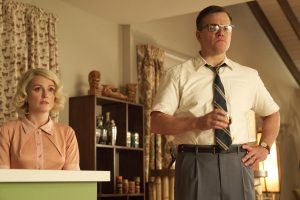 Left to right: Julianne Moore as Margaret and Matt Damon as Gardner in SUBURBICON, from Paramount Pictures and Black Bear Pictures.

The performances in this film are top-notch. Matt Damon is almost unrecognizable as Gardner, a middle-class father with the ultimate dad bod. His performance is multifaceted and layered and his character is unpredictable and chillingly calm. Julianne Moore plays both Gardner’s wife and her twin sister, Margaret. As Margaret, she is unnerving and disquieting as you cannot quite predict or see her intentions in the film. Her perfectly coifed hair and pristine 50s housewife clothing create an image that is both comforting and unnerving. The young Noah Jupe gives a thrilling performance as Nicky. A performance far beyond his years, he lays out his emotions and fear in a mere glance. These three work together to make the real meat of the story. Oscar Isaac’s role in the film is smaller than I expected but decent nonetheless.

The dialogue is quick and pointed with humorous moments coming in even at unexpected times. Filled with humor and sharp writing, Suburbicon is a must see and one of the best Coen films in years. Matt Damon gives a stellar performance alongside Julianne Moore and Noah Jupe. It is easily the best dark comedy in years. This perfect little family will rock you to your core. 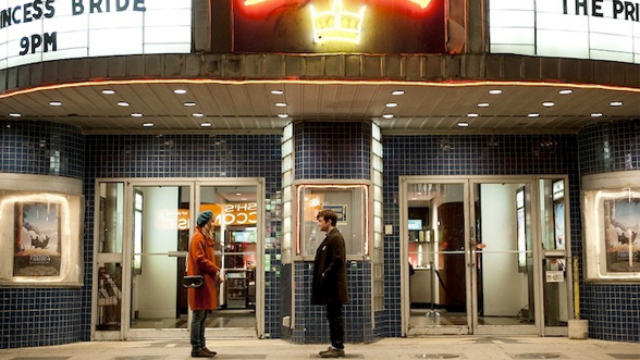