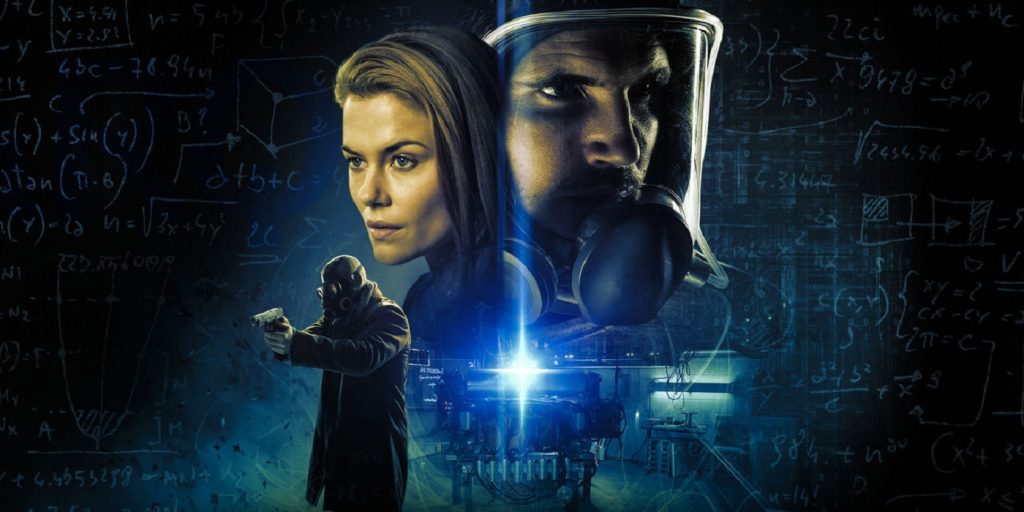 Tony Elliott’s ARQ takes place in the future, where an energy crisis has caused an ongoing war between Torus, a corporation oppressing people to stay in power, and The Bloc, a revolutionary group dedicated to taking Torus down. In the middle of all this is Renton (Robbie Amell), a former engineer for Torus, and his wife Hannah (Rachael Taylor). One day, Renton finds himself waking up and reliving the same, horrible events over and over again. Renton and Hannah work together to try and figure out why they’re caught in a time loop, along with how they can possibly escape from it.
In advance of its world premiere at the Toronto International Film Festival, We Live Entertainment chatted with writer/director Tony Elliott, who makes his feature debut with ARQ after making the sci-fi short Entangled along with writing for the series Orphan Black. Read on for the full interview, and be sure to watch ARQ when it premieres on Netflix on Friday, September 16th.

How did you come up with the concept for ARQ?

I had the idea back in 2008, but obviously, the time loop genre existed before that. There’s Primer, Groundhog’s Day, that kind of stuff, but I just wanted to do my own take on it back then. I’ve always been more interested in a realistic, scientific perspective of things. From that I thought, “Okay, if time is looping is there a scientific reason for that?” Then I thought, “Oh, there’s this machine,” and what does that mean thematically? So I would kind of built on ideas like that.

How much planning did it take for you to write the screenplay and make sure the internal logic was consistent?

It was a long process. Even though it’s set in the same place over and over again, it’s got a very complicated narrative, and so my process is I really hammered that script over and over again over a couple of years to make sure it all made sense. The way I kept track of is with diagram after diagram after diagram. I just really made sure I understood where everybody was narratively and of course emotionally, and kept layering it and made it more complicated. But I was trying to make it as clear as possible, which is a different challenge, because simplicity is very hard to do.

On top of all of those challenges you’re also teasing out details about the world you’re setting this film in. How did you decide on what information you would give and how much you would let the audience figure out on their own?

What I really wanted to do was give this film much more scope so it doesn’t feel so tight. So I built in the worlds of Torus and the Bloc and that conflict, and I would extrapolate what was happening today with resource extraction and the corporatization of so many things. I had to build that up and [think about] how it effects our characters, so I started including them in that larger narrative with Torus and the Bloc.

As far as what to include or what not to include, I felt it out. First I had to make sure it was important to the characters, their backstory, and what’s happening now. I didn’t want to overdo it and have stuff there just because. It was really kind of feeling it out and getting feedback on the script, so it was more of an intuitive process.

What was it like collaborating with Robbie Amell and Rachael Taylor?

I was so lucky to get them. They really responded to the material and they had such great chemistry with each other. They just brought their A-game every day, and it’s so inspiring to work with them. They brought a much deeper perspective to the characters, which is great because, as a writer, you can only bring so much, and they bring it to life. Like I said earlier, I hammered that script to make sure it was airtight as possible, and of course on day 3 Robbie’s like “Hey, does this make sense? I think it doesn’t” and I’m like “Oh shit, I didn’t even notice that!” because I was so close to the material. He brought this level of intelligence to it that made sure it all made sense. Rachel brought this tremendous amount of heart, and she’s the emotional throughline for the entire film so it was great on so many levels. And you see it, they work really well together. I feel indebted to their participation and cooperation.

You’ve written for Orphan Black and your short Entangled was also sci-fi. Do you feel like you’re naturally inclined to work in that genre?

I’ve always had an affinity towards it. I love high concept ideas when they tend to be sci-fi. I had written ARQ before Orphan Black. Actually, the script for ARQ got me the job on Orphan Black, coincidentally enough. The sci-fi angle is becoming more and more of my experience, and it’s a great spot to be in so I can’t really complain.

Have you written for other genres, then? Are you hoping to do that down the line?

It really depends on the story. Right now, I’m financing a crime thriller. It’s a really high-concept idea but it’s really about the story.

The score is very synth-heavy and electronic. What was it like developing the soundtrack?

We did [the score] a few months ago, and one of the tracks I listened to [for inspiration] was Brad Fiedel’s Terminator score. I didn’t want it to be that ‘80s retro, but I did want it to have a techno feel. I said let’s follow the emotional line of what our characters are experiencing and going through. I didn’t want any strings in this [because] it’s a very futuristic film, but I did want the heart.

How did the film end up at Netflix?

I first wrote this in 2008 but I had optioned it to a different director for five years. They tried to get it off the ground through a more traditional route with a larger budget, but they couldn’t do it. They returned the property to me when I had just finished directing my short Entangled, and I met my producer at TIFF when my short screened there [in 2014]. We were going to go the traditional route as well, which can be a much longer process, but one day I got a call from my producer who said Netflix read my script and wanted to talk to me. I pitched them over the phone and a week later they were like, “We’re in,” and they fully financed the film from day one.

Written by
C.J. Prince
C.J. Prince is based out of Ontario, Canada, and has been writing professionally about film since 2012. He served as editor of the website Way Too Indie and has been a member of the Online Film Critics Society since 2015. C.J. dedicates his time to hunting down the latest independent and arthouse cinema from around the world and also helps program an annual film festival in his hometown.