Tiffany Haddish and Ike Barinholtz talk about The Oath  and people on their cell phones.

I was lucky enough to sit down and chat with Ike Barinholtz and Tiffany Haddish at a recent press day for their new film, The Oath. This politically charged satire is a very special film for Ike Barinholtz because it marks the first time that he has written, produced, directed and starred in a feature film. It is also a bit of a change of pace for Tiffany Haddish since this role is unlike anything else she’s done so far but Haddish also serves as a producer on the film. During the interview, I got to talk with them about what it was like to work on the film, where the idea came from and to discuss one of the film’s main themes which tied into our current obsession with the media.

Scott Menzel: So, Ike, where in the hell did this idea come from?

Ike Barinholtz: This idea came from an argument at Thanksgiving dinner after the 2016 election between my mom and my brother and I, and we were all pretty much on the same side, but we were getting mad at each other and blaming each other, and I just knew the holiday table has been changed forever in America.

And the old maxim, “Don’t talk politics at the table,” now is not just advice. It’s an order, otherwise, bad stuff’s going to happen, so I knew that that arena was a fun place to explore a movie, and then the pieces just fell in place. I knew I needed her to play my wife, and a few other key components, but it just happened real fast.

Scott Menzel: Tiffany, what did you think when you read this script?

Tiffany Haddish: My heart started to sing. It was full of joy. I really enjoyed it. I felt like it’s something that could possibly happen. I felt like it was a great way to teach. It’s a teachable type of movie, and it’s funny so I really wanted to be a part of that.

Scott Menzel: This movie has so much to say. There’s so much social commentary, but the thing that I took away from this film is, would we as a society be better without social media and without the media?

Ike Barinholtz: It’s a question I ask myself a lot, and it’s easy to be like, “Of course it is. We would not be here,” but then you look at some of the things that, for every time I read Twitter and I see something horrible happening politically, I see a blind kid with a puppy, you know what I mean?

Tiffany Haddish: Or how about when my dog got out of the house and I couldn’t find her, and then somebody had tweeted, “Does anybody know this dog?” And I’m like, “That’s my dog, bitch!”

Tiffany Haddish: And I found my dog. Hello.

Ike Barinholtz: I do think the positives do outweigh the negatives, but the negatives are very big and very real, and I think that you could do worse than walk away from this movie with that in the back of your head, be like, “I’m not going to check Twitter quite as much. I’m going to be a little more present,” just because that’s what I’ve been trying to do.

Tiffany Haddish: Yeah, I really think it’s important for people to be present and aware of who’s around you, and let’s just have a conversation. We don’t have to pick up our phones every few minutes.

Ike Barinholtz: We’re on Earth for one trillionth…

Ike Barinholtz: She’s going to check it. Is that Drake?

Ike Barinholtz: Okay. So, yeah, we’re on Earth for so briefly, and-

Tiffany Haddish: See how rude that is? So fucking rude. I hate when people do that shit. (commenting on checking her phone)

Ike Barinholtz: I don’t mind when you do it, because it’s something cool. When Tiffany does it, I’m about to hear a great story.

Tiffany Haddish: I fucking hate it. I miss just going and being there. Remember when you used to be at home back in the day, in the ’90s when there were no cell phones?

Tiffany Haddish: And you just had a pager, and you had to find a landline if somebody wanted to talk to you?

Tiffany Haddish: They had to page you.

Tiffany Haddish: And then you talked to them when you get home.

Tiffany Haddish: Or when you get to a payphone. Hello.

Tiffany Haddish: … where you could catch a cold. Where the pay phones at? Can’t find a payphone nowhere. Just ain’t here.

Ike Barinholtz: I only want to use a phone that can give me a cold.

Scott Menzel: Well guys, thank you so much.

Ike Barinholtz: Thank you so much, man.

Scott Menzel: Great to meet you too! Thanks again.

The Oath  is now playing 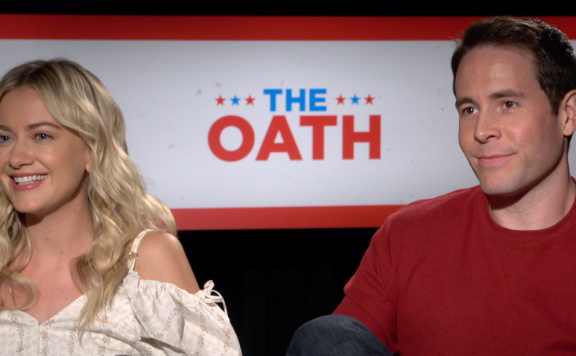