Tomorrowland  is both spectacular and disappointing

Tomorrowland is an intriguing and ambitious film that doesn’t fully work. Based on the futuristic themed land at Disney parks, the film is co-written by Damon Lindelof and Brad Bird and directed by the latter. While the movie scores points for its imagination and being influenced by Walt Disney’s EPCOT ideas and optimism towards the future, it also struggles to leave its mark as it slogs through a convoluted plot.

Bird’s film follows Casey Newton (Britt Robertson), a teenage dreamer with a bright and creative mind. After discovering an unusual pin that makes her see a colorfully futuristic world, Casey teams up with a girl named Athena (Raffey Cassidy) — who says she is a “recruiter” from the place. In order to fully get to Tomorrowland, though, the two of them must rely on a grizzled man named Frank Walker (George Clooney). So the unlikely trio go through a series of events as they try to make it to Tomorrowland, none of which I will discuss so as to not spoil anything.

Lindelof and Bird have certainly thought up some original touches for telling their story — from the technology presented to the story framing and more. Bird – who has made such terrific films as The Incredibles (2004) and Mission: Impossible – Ghost Protocol (2011) – springs these innovative ideas like surprises on the screen. This is especially true of the first and second acts of the film, as Bird continually presents suspenseful scenes that are full of flair and energy. As a director, Bird is still a genius at making different worlds on the page come to life on the screen.

Under Bird’s direction, Tomorrowland is certainly slick and beautiful in terms of looks. He and the brilliant cinematographer Claudio Miranda fill each frame with perfectly-lit and multicolored images – providing a cornucopia for the eyes. These images are also occasionally shown in long, unbroken takes, giving some of the scenes a wonderfully fluid feel; this is especially true of one of the first times Casey enters Tomorrowland. Michael Giacchino also delivers an amazing feel-good music score to match the pictures that pop off the screen.

The three central actors are the glue that helps hold Tomorrowland together when it doesn’t always flow smoothly. Robertson is sometimes over-the-top as Casey, but she also embodies the character’s enthusiasm and adventurous side well; it’s also nice to have a character that looks up to and inspires her father (played by Tim McGraw) in a believable way. She holds herself well next to Clooney too, with the two of them presenting a palpable and easygoing chemistry.

Clooney sheds his usual suave side in favor of making Frank more of a broken man. The actor isn’t quite as vulnerable or powerful as he is in his best work, such as The Descendants (2011), but he still turns in a fine performance. Plus it is fun to see him in a more family-friendly picture like this while also taking the drama seriously.

While Robertson and Clooney shine, it’s actually Cassidy who is the scene-stealer. The young girl plays Athena with that certain Disney charm that many female characters had in the studio’s past live-action films. Without spoiling reveals to her character, let’s just say that she handles all of the various aspects of Athena expertly. It will likely be a star-making performance for the actress, and deservedly so.

Despite the excellent cast, visual splendor, and a few well-written scenes, Tomorrowland fails to be a great film. The story, while visionary in ways, is a bit too all over the place and moves in fits and starts. The first two acts are full of exciting moments, but the scenes ultimately feel awkwardly paced and disjointed as they move forward. A lot of the dialogue makes this worse, as the characters constantly explain things to each other in exposition-heavy ways instead of favoring the show-don’t-tell rule.

The biggest problem, however, lies with the third act. There is so much buildup to that part of the story and it just doesn’t pay off. An important character named Nix (Hugh Laurie) has a certain arc that isn’t fully buyable, which instantly makes the film lose some dramatic weight. Lindelof and Bird also decide to shove the film’s message down the audience members’ throats in this act — to the point where I was like “Okay! I get it!” in my head. I actually agree with some of the movie’s positive looks at society and the future, but did it all need to be so didactic?

Like with a lot of Lindelof’s writing, there are a lot of absorbing ideas and pieces in Tomorrowland that just don’t quite gel together in the end. The movie shifts into different gears in jarring ways, and the third act derailed a lot of the film’s charms for me. Still, the cast in Tomorrowland is engaging and Bird and his technical team are wizards behind the camera. I just wish the film’s originality paid off with something a bit more than what I got in the end. 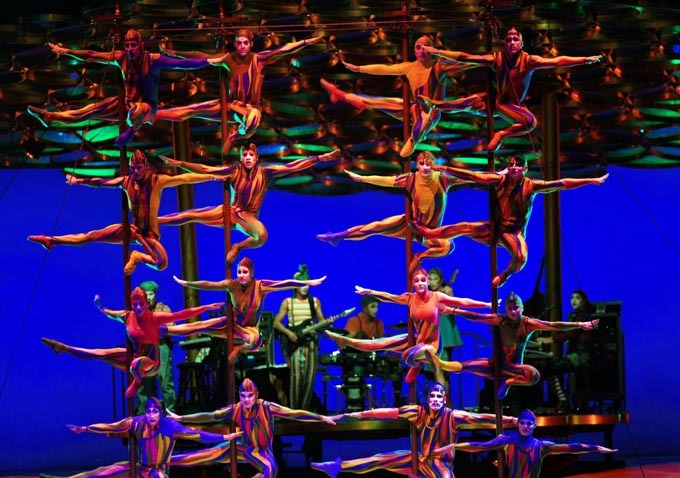 Tomorrowland  is both spectacular and disappointing   Tomorrowland Review by Daniel Rester Tomorrowland is an intriguing and ambitious film that doesn’t fully work. Based on the futuristic themed land at Disney parks, the film is c...
0
Average User Rating
0 votes
Please sign in to rate.