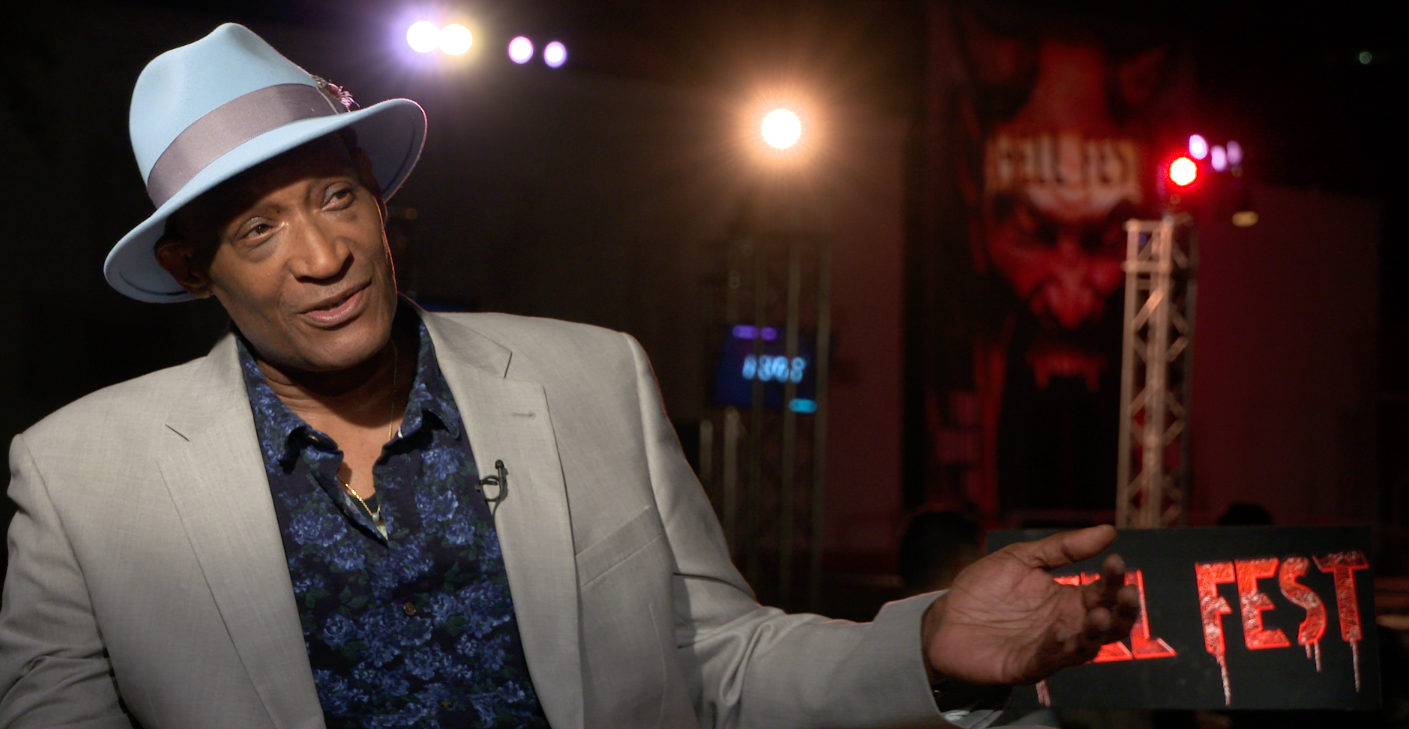 A few weeks ago, I was invited to attend a very special press day for the new horror slasher film, Hell Fest. Before going to the screening, I didn’t know much about Hell Fest. I didn’t see a trailer or even know what it was about so I went in blind and ended up really enjoying the film. However, what I enjoyed even more than the film itself, was the press junket. CBS Films went all out for this film as the press day was held at Six Flags Magic Mountain which was the perfect setting considering the plot of the film.

While at Six Flags, I got a chance interview several people involved in the film including Director Gregory Plotkin, Producer Gale Anne Hurd, and several of the actors from the film. Of the several actors that I interviewed, I got to sit down with legendary character actor Tony Todd.

Scott Menzel: Had a blast watching this.

Scott Menzel: And it was great to kind of see your small little role in this movie, but it was nice to see you pop up, because like I was saying before we started, you really are a legend in this genre. What was your initial reaction when you were asked to do this film?

Tony Todd: Oh, thank you. You know, receiving a script is like getting a present. It comes well wrapped, it’s all tied up. You just don’t know what’s in it. It could be a pair of socks that your grandmother knitted, or it could be a five-year subscription to Tesla.

So, I read it and was instantly intrigued. It made sense. It immediately grabbed me within the first five pages. I’ve been to a lot of haunted attractions in my life and my career. People always want to try to scare me, I don’t know why. But it played homage to those experiences in an accurate way. I knew it was going to be practical effects, which is great. And I love my character and you’ll be seeing more of him.

Scott Menzel: Yes, it was brilliant. I even thought the mask was just so authentic and felt so natural as the mask was actually part of the event, and it didn’t feel like it was made up just for the serial killer.

Tony Todd: Yeah, that was good work. It didn’t feel forced. And even cameos, you know, you had the bearded lady. Those were all genuine sideshow people in and around the Georgia area.

Scott Menzel: Yeah, I liked that too. So, how long did it take for makeup and everything?

Tony Todd: Okay, I had meetings with the costume designer for two days before we shot. She’s from South Africa. We had a Pulitzer-prize winning author in common. I worked with Athol Fugard. She knew him, we clicked right away.

So she gave me a choice of like 10 different jackets, actually 10 of everything. And together, we came up with the right design, everything was handpicked. And I knew that she was right when I looked down at my foot and on my ostrich shoes was a peacock feather. So just those scenes alone spawned me into action. And it was like playing a cross between Mick Jagger and Buddy Guy. Just complete opposites melding to one package. So she was great, and I applaud her.

But everybody’s great. The production design was great. Six Flags gave us a theme park deserted to have fun and play in. The crew, we had over a hundred-person crew, and I didn’t see anybody yawning. You know, we had to work long hours, 14-hour days, but they fed us well and we had respect for the process.

Scott Menzel: Wow, what Six Flags did you shoot in if you mind me asking?

Tony Todd: It was in Atlanta. It was a water park.

Tony Todd: Are you from Atlanta?

Scott Menzel: No, but I know the area. I actually dated someone down there for a couple years early on in my life.

Tony Todd: Oh okay, well then you know the area.

Scott Menzel: Yes, I do.

Tony Todd: It was in the outskirts of Atlanta like 40 miles out. I mean, you couldn’t build that set.

Scott Menzel: No, that’s what I really loved about the film, it felt like you invaded an actual amusement park for the day.

Tony Todd: For the day. And the way they kept walking around, it was endless. I never felt like they turned a corner, “Oh, I’ve seen this corner before.” It was a continual loop.

Tony Todd: And they had some great crane shots, which also added to the dimensionality of the project.

Scott Menzel: So you’ve been in so many great horror movies over the year, you know. What is it about the genre that really speaks to you and makes you want to keep coming back for more.

Tony Todd: Well, it’s not like I wake up every day and say, “I got to do a horror film.” I’m a well-rounded actor, and scripts are important. I did a couple of horror films early in my career, and I guess they stuck. But I’ve been lucky, it’s not just horror. And some of my best work, I’ve saved it for other genres. But I respect what horror’s done to me, and I respect the horror fans out there because they’re really adamant about what they respect and what they love and the commonality between their love of practical gore and being afraid and being scared is unique.

Scott Menzel: That’s very interesting, most people do know you or connect you to films like Final Destination, Candyman or other horror films. So, if you can speak to anyone who may have only seen you in that genre, what is a role that you are most proud of or one that you feel is rather unknown or unappreciated?

Tony Todd: Well, in the film world, I did a great film called Driven, which is about L.A. cab drivers, that won a bunch of independent film awards. But anybody that really wants to see me in my element, should see me on the stage. I’ve been on Broadway twice now, did a lot of regional work, got to work with the late great August Wilson twice before he passed away. Originated the role with King Henry II. So I wish everybody could see me on stage just once, and then you’ll know what I really, really love.

Scott Menzel:  It was so nice meeting you.

Tony Todd: Nice to talk to you.