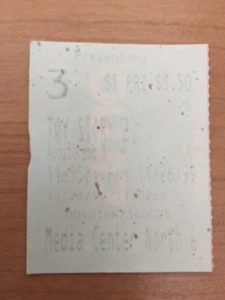 The release of Toy Story 4 provides a welcome opportunity to discuss Toy Story 2. Toy Story 2 will celebrate its official 20 year anniversary on November 24 this year, and it is not only the peak of the Toy Story series, but it is the film where Pixar went to the next level and would craft a string of profound films like Monsters, Inc., The Incredibles, Finding Nemo, Wall-E, Up, Inside Out and more.

Toy Story was about what toys do when we’re not looking. Woody (Tom Hanks) had to convince Buzz Lightyear (Tim Allen) that he was just a toy, but that being a toy is great. In Toy Story 2 they became a metaphor for us. The twist that Buzz had to save Woody this time was good sequelising, but Pixar found a deeper theme to their second Toy Story. 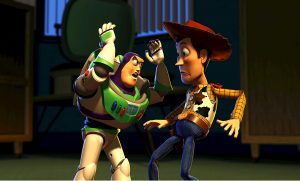 Toy Story was an identity crisis. Buzz didn’t know he was a toy. Toy Story 2 is an existential crisis. Woody has a choice. He can be famous collectible forever but never play with kids. Or he could belong to a child who will eventually outgrow him. How could that apply to you? Are you choosing between a high paying corporate job and a job you’d love but struggle to make ends meet? Is there a partner who doesn’t want to have kids, versus one with whom you have less in common but could have a family? This could get deep. 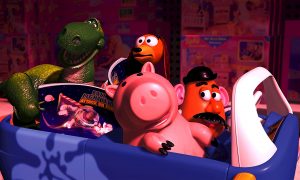 In Toy Story, the job is to be a toy or a collectible, have an intimate relationship with Andy or a steady flow of museum visitors. This became the heart of all Toy Story stories to follow. The toys would always be faced with decisions about what to be. The villains would always be resentful  the choice was made for them when they were abandoned. 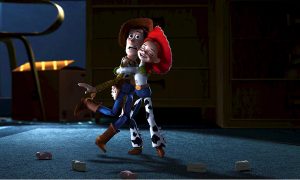 Only Toy Story 2 presents a sympathetic version in Jesse. “When She Loved Me” is the saddest song ever recorded because we get what it’s about. We did leave our childhood behind and maybe it was for positive growth but it’s still something to mourn. That song and montage still gets to me. It’s true kids become different people as they grow up. Beyond that, everyone becomes different people the longer you know them. Even if you grow together you can wistfully mourn how it was when you first met, and if it ends you’ll still remember the good times fondly. Wonder how many Pixar animators had been through a divorce.

Maybe it’s saddest because it’s not bad. Emily growing up and having new priorities is healthy. If Emily were a villain, Jesse would be better off without her but she’s not. Jesse just served her purpose for Emily. That Sarah McLaughlin song lost the Oscar to Phil Collins for Tarzan. I hope 20 years of grown men’s tears are some consolation to McLaughlin.

Inanimate Objects Are People Too 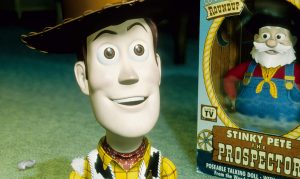 Our inanimate objects probably don’t have feelings but Toy Story is not alone in anthropomorphizing them. Even today Marie Kondo teaches us to thank our inanimate objects for their service. Pixar was onto something imagining our toys had feelings about us outgrowing them. Toys can have nightmares about being thrown away, or PTSD from being donated to charity.

Fortunately, in most cases there is a cycle and toys get new owners when we give them away. Andy leaves his toys with Bonnie in Toy Story 3, which also introduces the threat of destruction of toys in an incinerator. 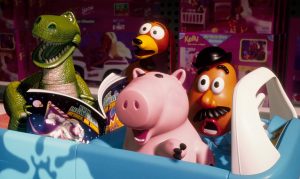 The nature of childhood is to be fickle. You’re learning who you are and what’s important to you. Toys can be vehicles for that but basing your self-esteem on a relationship so volatile is an extreme form of codependency. For either Andy or the Toy, but we see it from Woody’s perspective.

Moms hold yard sales while their kids are at camp and eigh-year-olds probably don’t remember what’s missing when they return. Moms may tell them they’re taking a broken toy to get fixed (like Wheezy) but really they’re just waiting for the kid to forget about the broken toy. 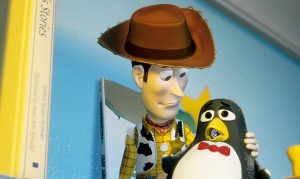 Woody probably has an easier decision in this scenario. He’s Andy’s favorite toy, so he can choose to stay with Andy over being a collectible. Andy’s not as attached to every toy. He forgot about Wheezy andWheezy wasn’t even collectible so Wheezy can’t even choose museum life. For Woody to even have this choice is privilege. Was it a metaphor for social inequality? I can choose between being freelance or full time. Other people don’t have anything to eat, let alone a phone to read this article on. 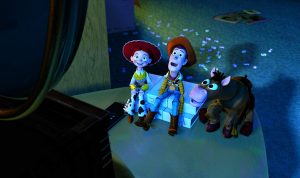 The decision impacts other people too. Jesse, Stinky Pete and Bullseye want to go to the museum. If woody chooses Andy they will be hurt. Someone gets hurt no matter what. That’s life and that’s why decisions are hard. Woody convinces Jesse and Bullseye to be toys again but sometimes people do want different things and you can’t have it both ways. In those cases trying to talk them into giving up their wants and needs can be invalidating. 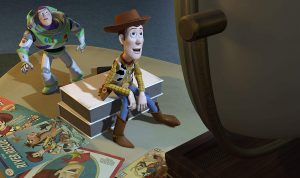 Another interesting question Toy Story 2 raises is why doesn’t Woody know his backstory or the other characters in Woody’s Roundup? Buzz Lightyear arrived thinking he was a real space ranger. It could just be that it’s been so long for Woody he doesn’t remember but I think there’s more to it. The toys are a reflection of Andy. 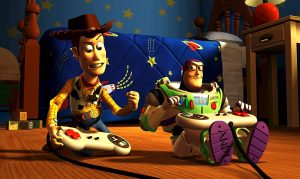 Andy doesn’t know Woody’s Roundup. It was an old black and white show before his time. All he knows is he’s had this cowboy since he was born so that’s all Woody knows. Andy probably watched the Buzz Lightyear show and we know he has the Buzz Lightyear video game. Andy knows all the contemporary Buzz Lightyear marketing so that’s who he thinks he is. 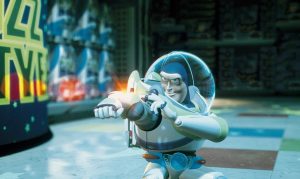 When Buzz meets another Buzz Lightyear in the Toy store the new Buzz also thinks he’s a real space ranger. It could be just how each toy is “born.” Buzzes think they’re real. Woody’s are independent.

By the time Toy Story 3 came out it became most people’s favorite. I think that’s mostly because in the 11 years between, people forgot how good 2 was. It’s okay, most people don’t think about a movie for a decade like I do (two decades and counting now). 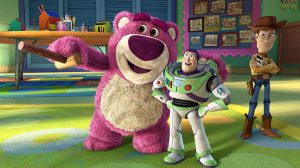 Toy Story 3 largely plays the same themes and if you’re effectively hearing them again for the first time, they still work. Lotso Huggin’ Bear is bitter that he got replaced, which is sort of a combination of Stinky Pete (who never got played with) and the negative parts of Jesse. Lotso is a missed opportunity because his owner’s parents lost him and replaced him with another Lotso. His owner still loved Lotso. That’s different than Jessie’s owner outgrowing her. I wish they’d explored what happens when multiple copies of the same toy exist in a child’s life. 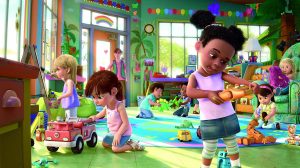 The middle of Toy Story 3 doesn’t do much for me. The toys try to break out of preschool instead of a museum collection. There is a hierarchy to the school, commandeered by Lotso, but it all feels like filler to me until they reach the real point of the film, the epilogue.

Most of Toy Story 3 is spinning its wheels because they’ve reached the inevitable conclusion predicted by Toy Story 2. Andy did grow up and go to college so he gave his toys to Bonnie. That is poignant and bittersweet. It feels like that should’ve been the beginning of Toy Story 3, but maybe they just had to work through the realization that the time had come, just like Woody does. I was very happy that a series of shorts and TV specials continued new tangents for the toys when they belonged to Bonnie.

Former Pixar head John Lasseter gets sole directing credit on Toy Story 2. Now knowing how he treated Pixar’s female employees we have to consider his misdeeds along with his legacy of meaningful films. Animation is a collaboration, as is any filmmaking, so plenty of other good people worked on Toy Story 2 including co-director Lee Unkrich, writers Pete Docter, Andrew Stanton and the late Joe Ranft, the original Pixar braintrust as well as names who didn’t become famous like Rita Hsaio, Ash Brannon, all the voice actors, etc. but it’s only right to acknowledge that many women at Pixar suffered while this beautiful film was being made. Hopefully they can continue making movies we love in a healthier environment, although now Skydance can’t.

Toy Story 4 comes 20 years after my favorite Toy Story 2, but takes the toys in exponentially more directions. At this point they’re all different colors of the ultimate universal truth: nothing lasts forever and you choose the experiences you’re going to have in life. There is a villain toy in an antique shop, and she wants something from Woody, but it’s all so she can find her owner. She’s the first Toy Story villain who doesn’t resent her owner. And not all kids belong on the pedestal Woody puts Andy. 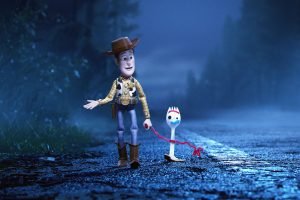 The creation of Forky speaks to the truly precarious nature of kids loving inanimate objects. Parents could be very likely to throw a kindergarten arts and crafts project, not understanding that Forky is special to Bonnie. Not to mention, Forky’s own nature is to get lost.

When I was a kid, I fell in love with a broken pretzel that looked like a little guy. I didn’t eat it and saved it, but I was so scared that someone would mistake him for food or trash. I did manage to save him, in a plastic baggie, in my room until I outgrew my attachment to the pretzel man. So I totally relate to Bonnie being in love with a spork. 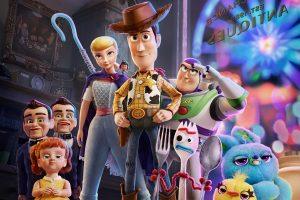 There are many different forms a child’s love can take. As long as there are children I think there will always be Toy Storys. I’m surprised people really thought Toy Story 3 would be the end. Bonnie clearly seemed like the beginning of a new chapter to me. And people may feel Toy Story 4 is an end too. To me I just see more possibilities, you could say possibilities to infinity… and beyond.