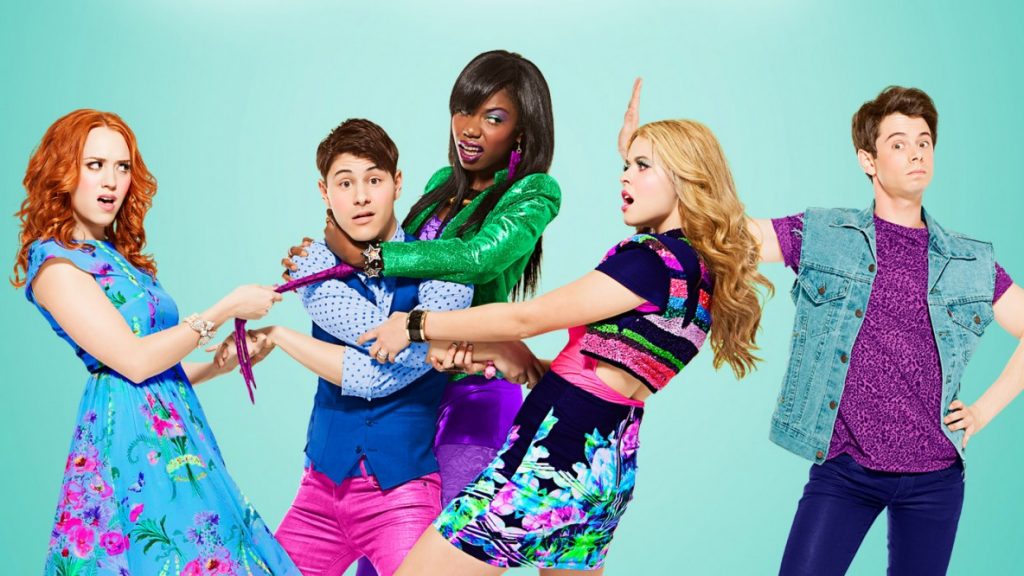 G.B.F, which stands for gay best friend, is a film that takes place at a high school that has no students who are officially “out of the closet.”  There are however, two gay guys at the school, Brent (Paul Iacono) and Tanner (Michael J. Willett), who are quite curious as to what would happen if one of them publicly came out. While these two friends are debating on what, the rest of the school is all focused on the upcoming prom season and trying to figure out who will be nominated Prom Queen and King. One day, Brent and Tanner decide to check out this new iPhone app, which allows them to see who else in town is gay. All hell soon breaks out when Tanner’s phone gets taken away during class and Soledad (Joanna “JoJo” Levesque), the leader of the Gay Straight Alliance uses the app to track down and find the first gay to attend her high school.

To be fair, a film that’s primary focus is to tell the story of how gays should be accepted just like everyone else is a hard sell to the common movie-going audience, but when films like this premiere at film festivals such as Tribeca, people really eat this shit up. The thing with G.B.F is that I feel it is a film that has main stream potential, but it would only sell if so many people weren’t still afraid to watch a film with a gay protagonist. I have watched so many movies about teenagers throughout my life and very rarely do they mock high school life as accurately as G.B.F does.

After my initial “will I like this” thoughts that I had during the rainbow filled opening credits and plot setup, I found myself really engrossed in the film and its characters. On the surface, many will probably say this is your typical coming to age comedy, but I beg to differ. G.B.F. is really more of a social commentary on the world today while mocking and playing homage to several teen based films along the way. The film does have two center characters who are gay, but there are also a lot of other characters for those of us who aren’t gay but have experienced life in an American high school.

The film features every type of archetype found in a modern day high school setting and shapes them in a way that makes spending 95 minutes with these characters an enjoyable experience for the audience. I think the film creatively mixes together all of its characters by having some as the typical stereotypes while others vary quite heavily. Honestly, I felt it’s was a good way to really bridge the gap of the typical teen movie by staying true to some of the material that most people seem to love while giving others more depth.

As for a list of the primary characters and their archetypes, the film features a ton of characters. First off, you have two gay guys: Brent and Tanner. Brent is the gay guy that is typically displayed  in most media today. He is very feminine and wears a lot of female friendly outfits. Tanner, on the other hand, is the gay guy that can be viewed as the normal regular guy. He likes comic books, doesn’t act overly feminine, and honestly, doesn’t make a big deal out of the fact that he prefers a penis rather than the vagina.

The other character types in the film including Fawcett (Sasha Pieterse) the hot girl, Shiley (Andrea Bowen) and McKenzie (Evanna Lynch) the religious types, Sophie (Molly Tarlov) the I am not sure if she’s a lesbian or a rebel, Soledad (Joanna “JoJo” Levesque), the activist, Glen, the straight guy who everyone thinks is gay, and lastly, Caprice (Xosha Roquemore), who more or less is your typical black girl with a hot shot attitude and is big on trying to promote diversity within the school.

I must admit that I really enjoyed the majority of these characters and found that each actor or actress brought something to the character type they were portraying. This was one film where I felt that almost every character added something to the story because of how the story was written and how the film ultimately played out. Even though I felt that everyone was great in the film, I do have to admit that a few of these characters stood out above the rest.

First and foremost, Michael J. Willett was great as the film’s lead and really gave a solid performance especially for his first big screen role. I always enjoy films that try to break the clichéd over the top gay stereotype that is portrayed in the media and really thought that Willett nailed it.  I also found that Sasha Pieterse (Fawcett) was like a breathe of fresh air to the typical “hot popular girl” cliché found in the majority of teenage films. I like how her character had a lot of depth to it especially as the film went on and we as audience members get to know her character better.

Out of all the characters within the film, I think it was Shiley that was probably my favorite character because I loved the fact that she mocked the Mormon religion. I found that Andrea Bowen gave her character the perfect innocent look and act but at the same time was able to deliver some of the most comedic lines in the film. I absolutely found the whole hj, bj, rj speech to be hilarious.

I must also mention that I enjoyed the notable actors that made cameo appearances in the film such as Megan Mullally as Brent’s Mom, Rebecca Gayheart as Tanner’s Mom, and Natasha Lyonne as Ms. Hoegel. I thought these secondary characters were all so quirky that they made most of the primary characters seem sane. The Mullally’s scene where Brent (Paul Iacono) and her were trying to bond while watching Brokeback Mountain together was hilarious. The commentary that Mullally was making while watching the film was so comical even with the fact that Brokeback Mountain has been mocked 100 times before.

For a first time writer, George Northy, did a pretty great job with the script. You can tell he was inspired by a lot of different types of teenage films that he grew up watching and enjoyed as a film lover. To be honest, G.B.F for the most part reminded me of Mean Girls meets the classic 80s John Hughes high school movie. I say that because of the way that it addressed and shaped its characters and story. It had enough modern that references to be hip to today’s audience, but also incorporated a lot of classic teen movie references that allowed today’s teen movie cynic to appreciate the film especially by playing homage to films like Carrie while tackling elements of Easy A, Mean Girls, Clueless, and various others. While I can find things that were weak about the script, such as some underdeveloped secondary characters and scenes within the film feeling a bit too rushed and others feeling a tad drawn out, but those elements didn’t take away from the vast majority of the film.

All in all, G.B.F is a breath of fresh air to the tired and usually mundane teen genre. While it’s not flawless and does have certain elements that are a bit too much like the secretly gay Mormon boyfriend, I do feel that at its core it is fun and entertaining. I love the fact that the film isn’t afraid to take a jab at teen movie genre from the 80s to today. If you are someone who enjoys the classic teen comedies but has grown tired of the 21 & Over and Project X type films that have overthrown the genre, then I highly recommend checking out G.B.F.

Tribeca 2013 Review: 'G.B.F' proves In high school, every girl needs a G.B.F. G.B.F, which stands for gay best friend, is a film that takes place at a high school that has no students who are officially “out of the closet.”  There are ho...
0
Average User Rating
0 votes
Please sign in to rate.