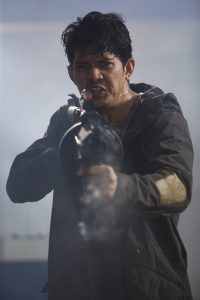 Back in the ‘90s the ultimate martial arts combination would’ve been Jackie Chan and Jet Li. They finally did it in 2008. Now the martial arts heirs Tony Jaaa, Iko Uwais and Tiger Chen team up  in Triple Threat and they even got Scott Adkins, Michael Jai White and Jeeja Yanin to join them. Were Joe Taslim and Yayan Ruhian busy? I shouldn’t be ungrateful. They got a major representative of each style of fighting.

A military squad rescues Collins (Adkins) in a siege of a war camp but kills Jaka (Iko’s wife. Jaka comes looking for the guys involved, but squad members Payu (Jaa) and Long Fei (Chen) were double crossed in that mission too so they’re really all on the same side to make Collins and Devereaux (White) pay. 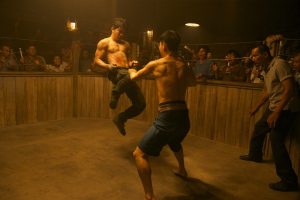 So you’ve got Silat vs Kung Fu and Muay Thai. They each get plenty of chances to fight solo too, or to team up against a powerful foe. Triple Threat really explores all the possible combinations of martial arts talent at their disposal. 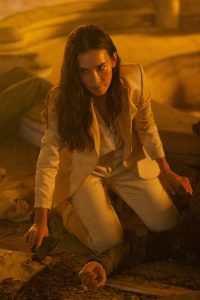 Heiress Tian Xiou Xian (Celina Jade) is Collins and Devereaux’s next target, so the trio protects her so they can get close to their targets. The plot is as simple as it needs to be to get all these guys fighting, or as convoluted as it takes to orchestrate all these battles, whatever the case may be.

There’s a lot of shooting violence too but anyone can pull a trigger. The main attraction is skilled martial artists, but Triple Threat does harken back to action movies where violence was dangerous and indiscriminate. Extras are getting mowed down left and right. And up and down and backwards and forwards. Some of those kill shots are so graphic it’s magnificently gratuitous. There’s vehicular action too. Adkins does an impressive  stunt in a car chase. 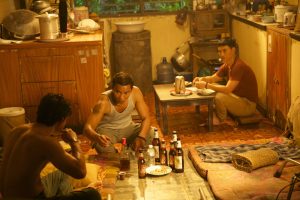 But the tropes of these action movies aren’t just the fighting. There’s time for bonding while Jaka, Payu and Long Fei are hiding out with Xian. There’s a personal rivalry between Jaka and Devereaux. There’s uneasy alliances and double crosses. 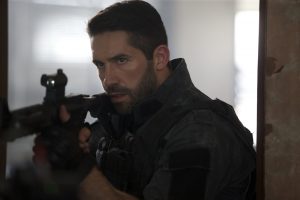 In an age where mainstream entertainment is so formulaic, we need to turn to the underground indies to deliver the high concept must see spectacle. Triple Threat generates such excitement from its badass pairings and unadulterated shootouts, the big CGI spectacles can’t compete.