Trumbo Review : Is this a big Oscar contender for 2015? 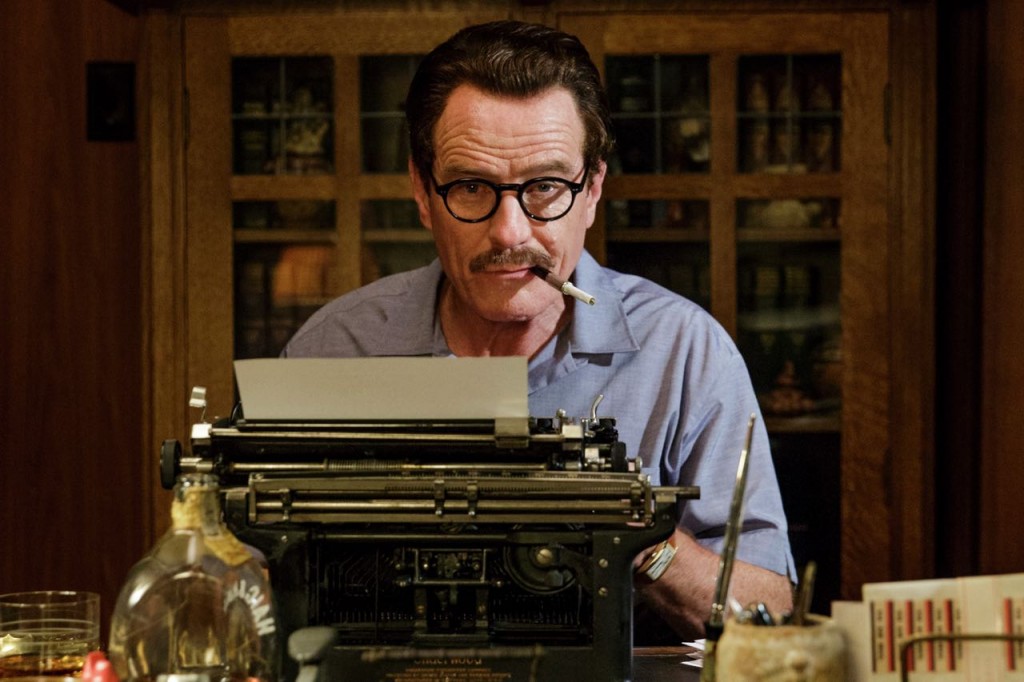 In the McCarthy era of blacklisting in Hollywood, comes Trumbo; a film about a man who is admittedly a communist. Dalton Trumbo (Bryan Cranston) is a very successful screenwriter in Hollywood, until the House Un-American Activities Committee, fronted by Hedda Hopper (Helen Mirren), John Wayne (David James Elliott) and J. Parnell Thomas (James DuMont) begin the attack of fellow writers, actors and workers in Hollywood, accused of being communist and un-American. Dalton Trumbo is living with his family; wife, Cleo (Diane Lane) and three kids, Niki (Elle Fanning), Chris and Mitzi when the accusations and attacks begin. He is part of a group of friends who decide, once subpoenaed, they will testify and give the committee a hard time. Arlen Hird (Louis CK) and Edward Robinson (Michael Stuhlbarg) are part of this group who agree to go along with his plan. The court finds Dalton and Arlen in contempt of Congress and sentences them to jail time. Before they go to jail, Arlen tells Dalton that he is sick with lung cancer. While Dalton and Arlen were in jail, their friend Edward was unable to get work so he testified in Congress that Trumbo and Arlen were communists. 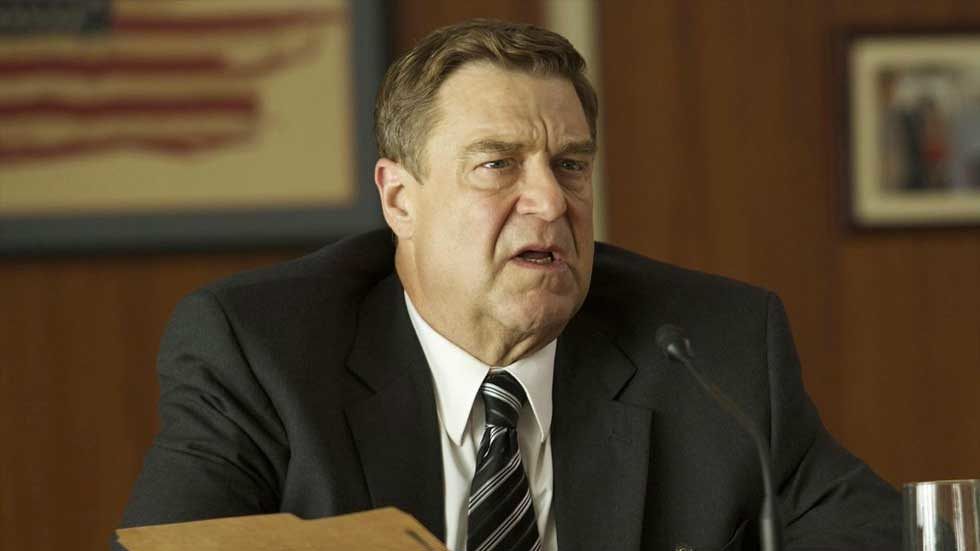 Finally, Dalton and Arlen were released from jail but still could not find work. Dalton and his family were forced to move. Arlen’s wife and kids left him and he moved into a small apartment. In an attempt to keep earning money, Dalton contacts Frank King (John Goodman) to write under his company, but came up with nom de plumes for his various works. He recruits his friends; among them was Arlen. He had his friends help him write and edit scripts. He even recruits his family to deliver the scripts. It takes a huge toll on the family, Dalton and Arlen. Eventually, it all comes to a head. Arlen and Dalton fight and stop working and even speaking to each other. Trumbo even fights with his wife and daughter when he comes to the realization that he should not let this ruin his family. Much too late he tries to mend things with Arlen, but he has already passed away.

Later, Dalton is approached by Kirk Douglas (Dean O’Gorman) to help with a script that he is acting for called Spartacus. Dalton agrees to help and also is approached by the foreboding Otto Preminger (Christian Berkel) to work on Exodus. Not far behind is Hedda Hopper ready to attack. She informs everyone in Hollywood that Dalton Trumbo is behind Spartacus, yet people ignore her and go to the film anyway, including President Kennedy. This marks the unofficial end of the attack on communists in Hollywood. There are many other little nuances in the storyline that enhance it even further, but I will leave those for you to discover. 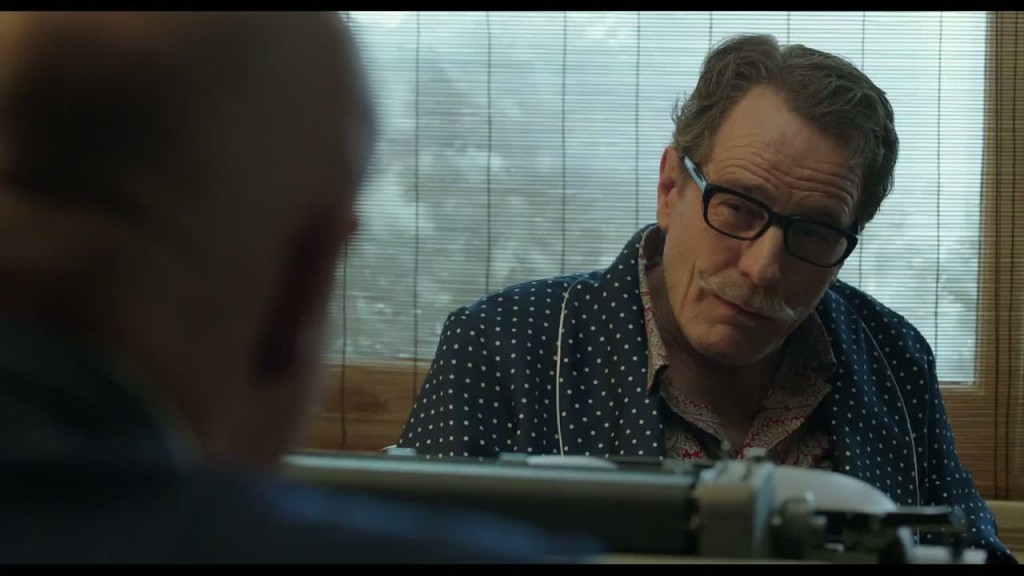 Bryan Cranston is just an incredible lead in this film. He set the bar so high for the caliber of acting that everyone seemed to meet him at his level. While watching the film, Bryan Cranston transforms into Dalton Trumbo and truly embodies the character. Since he is such a well-known actor, you would expect to always see him as Bryan Cranston, but he does such an incredible job, you only see Dalton Trumbo. The supporting cast is great as well. Helen Mirren truly plays a deplorable human being. The actors who took on the roles of such well-known people like John Wayne, Kirk Douglas and Otto Preminger were great. They embodied those actors so well that you felt you were watching the real people in the film. Even the supporting characters were great and added real depth to the film. They helped to create the world in which we see this genius man.

The writing in this film is impeccable. There is quick wit and moments that truly make you think. There are memorable lines that climb right into your soul and make you question your thoughts, your perception and yourself. That is incredible writing. Cranston’s delivery of these lines makes the writing shine even more. This a movie that could easily have been a very heavy long tedious dialogue driven movie, but because the dialogue is so incredibly well-written and performed, you don’t even feel the length of the 124 minutes. 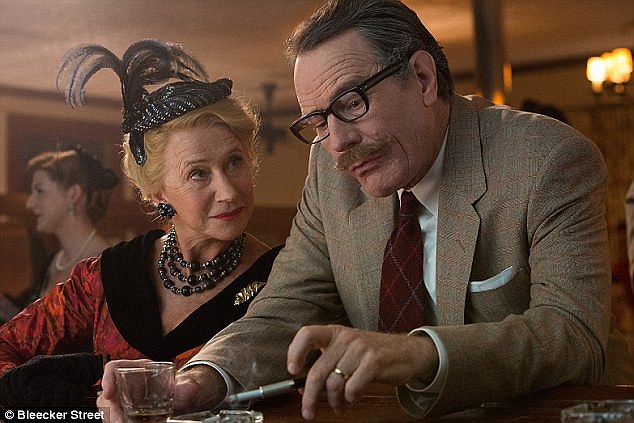 The costumes and set design were extremely well done. You truly feel as though you are being transported back to the 40s and 50s. The styles were so detailed and beautiful. Hedda Hopper’s hats and costumes should alone win the Oscar for Best Costume Design! Also, another incredibly important part of this film is the makeup. They do a seamless job of using makeup to age all the characters in a way that looks natural and realistic. It is an all around visual masterpiece.

Without a doubt, this film is a big Oscar contender and deservedly so. They weave an incredible story of tragedy, treason, and triumph, accented with moments of true humor. This is the must see period piece film of 2015. I highly recommend it. 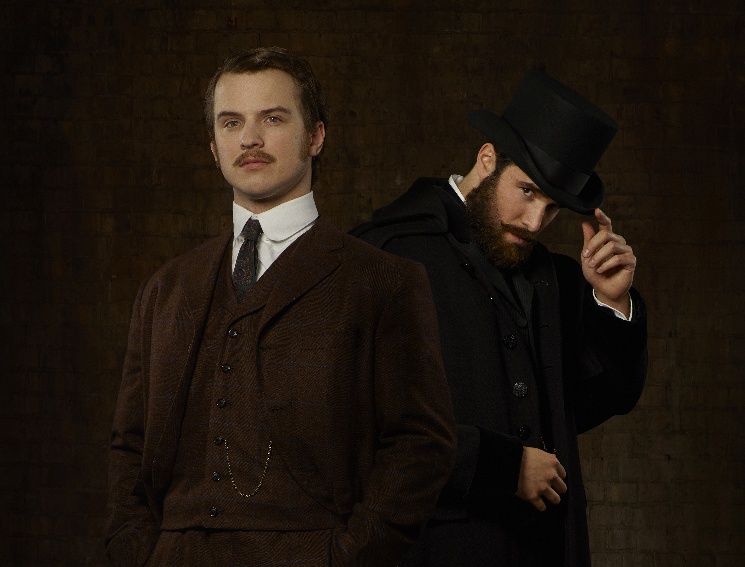 Trumbo Review : Is this a big Oscar contender for 2015? In the McCarthy era of blacklisting in Hollywood, comes Trumbo; a film about a man who is admittedly a communist. Dalton Trumbo (Bryan Cranston) is a very successful screenwriter ...
0
Average User Rating
0 votes
Please sign in to rate.