The Federal Bureau of Investigation has had the likes of Al Capone and Ted Bundy on its watchlist, and they’ve also kept tabs on some controversial musicians such as NWA and Tupac Shakur. They’ve even had their doubts about Elvis, The Monkees, and Frank Sinatra, but nothing came of those probes. It wasn’t until the FBI officially listed The Insane Clown Posse and their fans—known as Juggalos—as a bona fide gang that things got really crazy. Is having questionable taste in music a crime? If it is, then a whole lot of folks would be put on the FBI’s Most Wanted List.

It’s pretty hard to be alive in the world of pop culture and not know who the Insane Clown Posse are. I’ve heard of them—they’ve been active since the 1980s and racked up two platinum and five gold albums in sales—but I never really heard them until I watched this fascinating new documentary, The United States of Insanity. It’s impressive how they’ve amassed a passionate fan base without the traditional support of a big record label, radio play, or traditional press coverage. 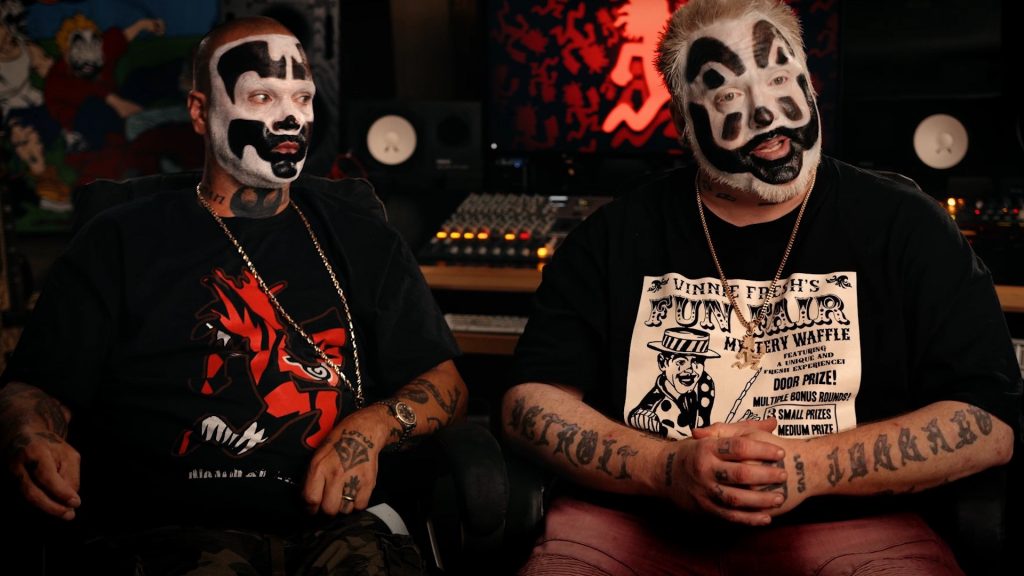 Insane Clown Posse, also known as ICP, is a Detroit-based hip hop duo who cross over into the horrorcore and rap rock subgenres. Their two main men are Violent J (Joseph Bruce) and Shaggy 2 Dope (Joseph Utsler). During the documentary, we get a look at their elaborate live performances and theatrical, horror-inspired, darkly humorous music videos, which are pretty impressive—but this movie is more about the fans, who’ve come under fire from none other than the FBI itself.

In 2011, the FBI listed Juggalos as a loosely organized gang. While some characteristics tie Juggalos together, such as broken homes, suffered abuse, lower class, and a smaller percentage of drug use, very few are hardcore criminals. What kind of music one listens to shouldn’t matter—as one commentator says, there are probably many murderers who listen to Beethoven. Should such a loose tie brand a fanbase? If so, who’s next in the FBI crosshairs? 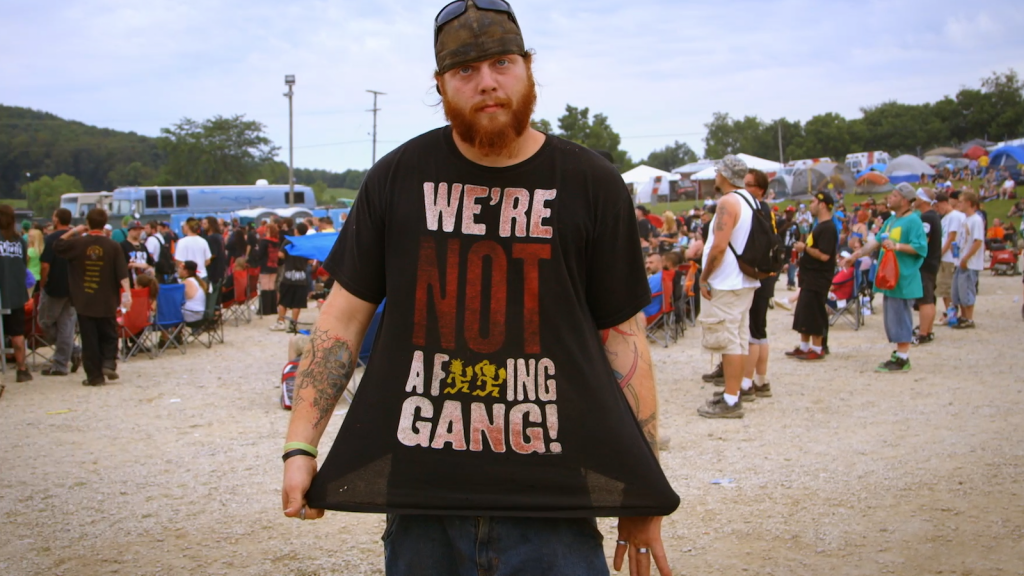 While it may not seem like such a big deal, it actually did turn out to be one—the band was banned from performing in most cities across the U.S., thereby depriving them of their income. Despite the record-record sales, these guys are not rich, they have no other career, and they rely on touring for their livelihood. What’s more, their fans have been pulled over by the police just for having a sticker of ICP’s mascot, Hatchet Man, on their car’s windows, or just for wearing a tee-shirt showing Violent J and Shaggy 2 Dope. The filmmakers follow some of the Juggalos in their day-to-day lives, and showcase interviews with several of them, a few of whom have been fired without cause from longtime jobs, lost child custody battles, or were stricken from military posts due to the “gang affiliation” tag.

Though biased to ICP’s cause, the filmmakers do an excellent job presenting a well-rounded picture of the situation. They don’t shy away from showing news footage of the crimes, some of them quite heinous, committed by Juggalos. They also interview Violent J’s mom, show the duo in their personal lives, and follow the landmark case filed by the American Civil Liberties Union on ICP’s behalf. It’s fascinating to follow the ups and downs of the case, and it’s quite chilling at times. 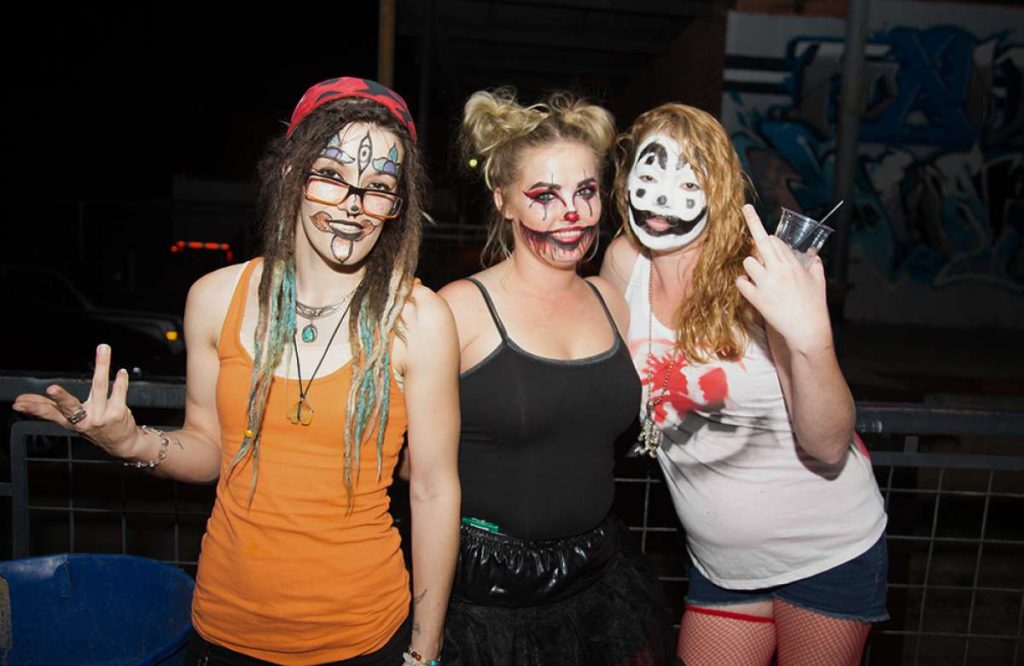 It well-explained how Juggalos are one of the very few music subcultures left in the U.S. Previous outsiders, such as punkers and goths, have become absorbed into acceptable, mainstream pop culture, and one can see their influence in everything from fashion magazines to department stores.

Violent J and Shaggy 2 Dope are totally open in the documentary and make a strong argument for themselves with just the right amount of humor and intelligence to counter their outrage at the situation they’ve found themselves in. While some of their lyrics are violent and shocking, we learn that ICP also has many positive songs about everything from God and the sanctity of family. They also have food drives for the poor and do fundraising to aid those who’ve been devastated by natural disasters.

“Family” is a word that comes up a lot in The United States of Insanity, and the guys are sincere in their love of their extended Juggalo family. It is hard not to feel for them as they try to stand up against the almighty United States government. 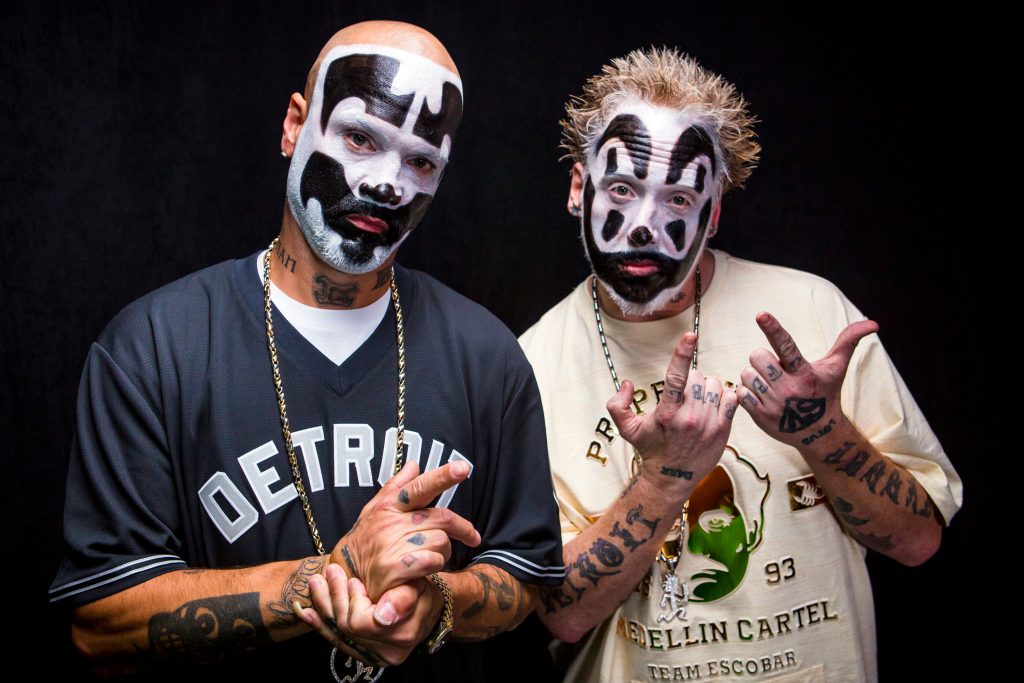 The guys are dressed as clowns throughout, and some of their fans look equally ridiculous, but if you can look beyond that and listen to what’s said, The United States of Insanity is a surprisingly deep, thought-provoking documentary that anyone who loves music or is interested in civil liberties needs to see.

The United States of Insanity screened at this year’s Fantastic Fest and will screen in 600 theaters on October 26, 2021, via Fathom Events and will be streaming just about everywhere in December. 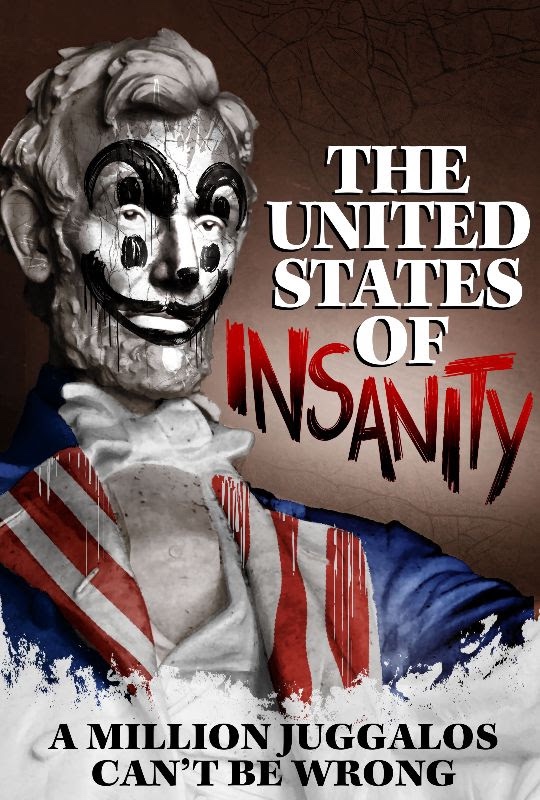 ‘The United States of Insanity’ Review: Clowns Vs The Feds (No, Really)

https://youtu.be/NBEK4NLcbrY The Federal Bureau of Investigation has had the likes of Al Capone and Ted Bundy on its watchlist, and they've also kept tabs on some controversial musicians such as NWA and Tupac Shakur. They've even had the...
0
Average User Rating
0 votes
Please sign in to rate.
Film:The United States of Insanity
Cast:Shaggy 2 Dope, Violent J
Director(s):Brenna Sanchez, Tom Putnam
Writer(s):Brenna Sanchez, Tom Putnam
Genre:Documentary
Studio(s):Strike Back Studios
MPAA Rating:PG-13