Venom: Let There Be Carnage is a “more of the same” sequel to Venom, the film that introduced us to the cinematic version of the lovable but deadly extra-terrestrial symbiote from the Spider-Man universe. It had the same stock plot as almost every comic book: Regular Joe gets infected by some supernatural juice and struggles with his alter-ego until he finally accepts his fate, makes the best of it, then fights the bad guys and throws out a few funny one-liners.

The sequel takes place a year after the events of Venom, as investigative journalist Eddie Brock (Tom Hardy) is still grappling to adjust to everyday life as the host of the alien symbiote Venom. This uneasy roommate situation (they share the same apartment… and body) grants Eddie super-human abilities to channel the lethal vigilante known as Venom, but it leaves him without a job and a fiancée. 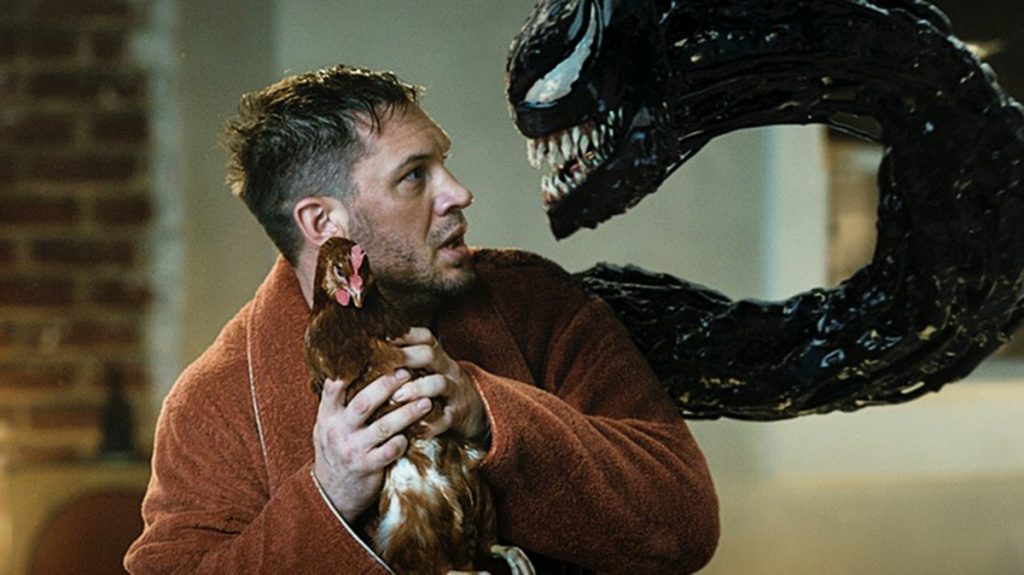 After Eddie was let go from his newspaper gig, his girlfriend, D.A. Anne Weying (Michelle Williams), dumped him and started dating Dr. Dan Lewis (Reid Scott). While trying to be “just friends” with Anne, Brock focuses on his best bet to reignite his career. He thinks he can do this by scoring an exclusive death-row interview with serial killer Cletus Kasady (Woody Harrelson). It seems like a good idea until Cletus gets a symbiote of his own, Carnage, escapes from prison, and wreaks havoc all over town. Along for the wild ride—in a classic Mustang, no less—is the killer’s longtime crush, mental patient Frances Barrison (Naomi Harris), whose eardrum-piercing screams can wake the dead—and turn the living deaf as a doornail.

Directed by mocap superstar Andy Serkis, the virtual performances are as excellent as expected. Venom: Let There Be Carnage is a truly dazzling, dizzying spectacle with many exciting action sequences—all of which lead up to the big CG showdown between Eddie and Cletus and their toothy, bloodthirsty symbiotes. The writer of the first Venom, Kelly Marcel, is back, and it shows—if you enjoyed the first flick, you’re likely to dig this one, too. A lot is going on, but none of it is hard to follow. The comedy is cute and dopey—imagine if one of TV’s “The Odd Couple” was a cantankerous alien lifeform—and the romance and bromance add some relief from the, well… carnage. 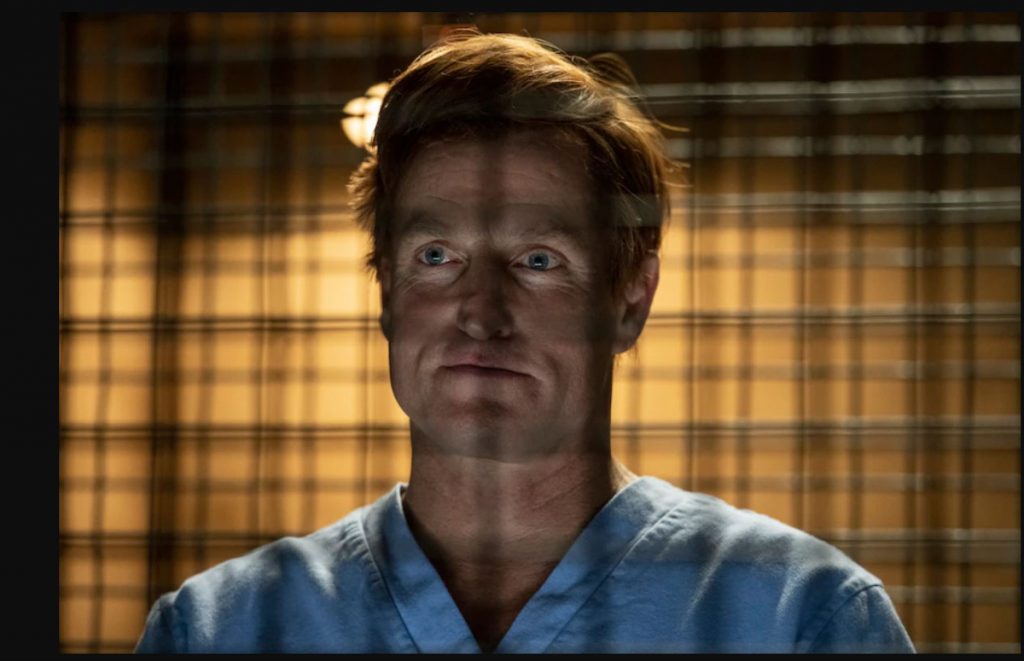 This comic book flick is pretty violent; I bet it just scraped by the censors to earn its box-office-friendly PG-13 rating. Most of the killings take place offscreen, but you’ll get the gist—in addition to some salty language and intense, harrowing moments. It’s also super-silly; just go with it.

Venom: Let There Be Carnage is fun, fast-paced, and forgettable. If at all possible, see it on the big screen.

VENOM: LET THERE BE CARNAGE OPENS IN THEATERS ON OCTOBER 1, 2021. 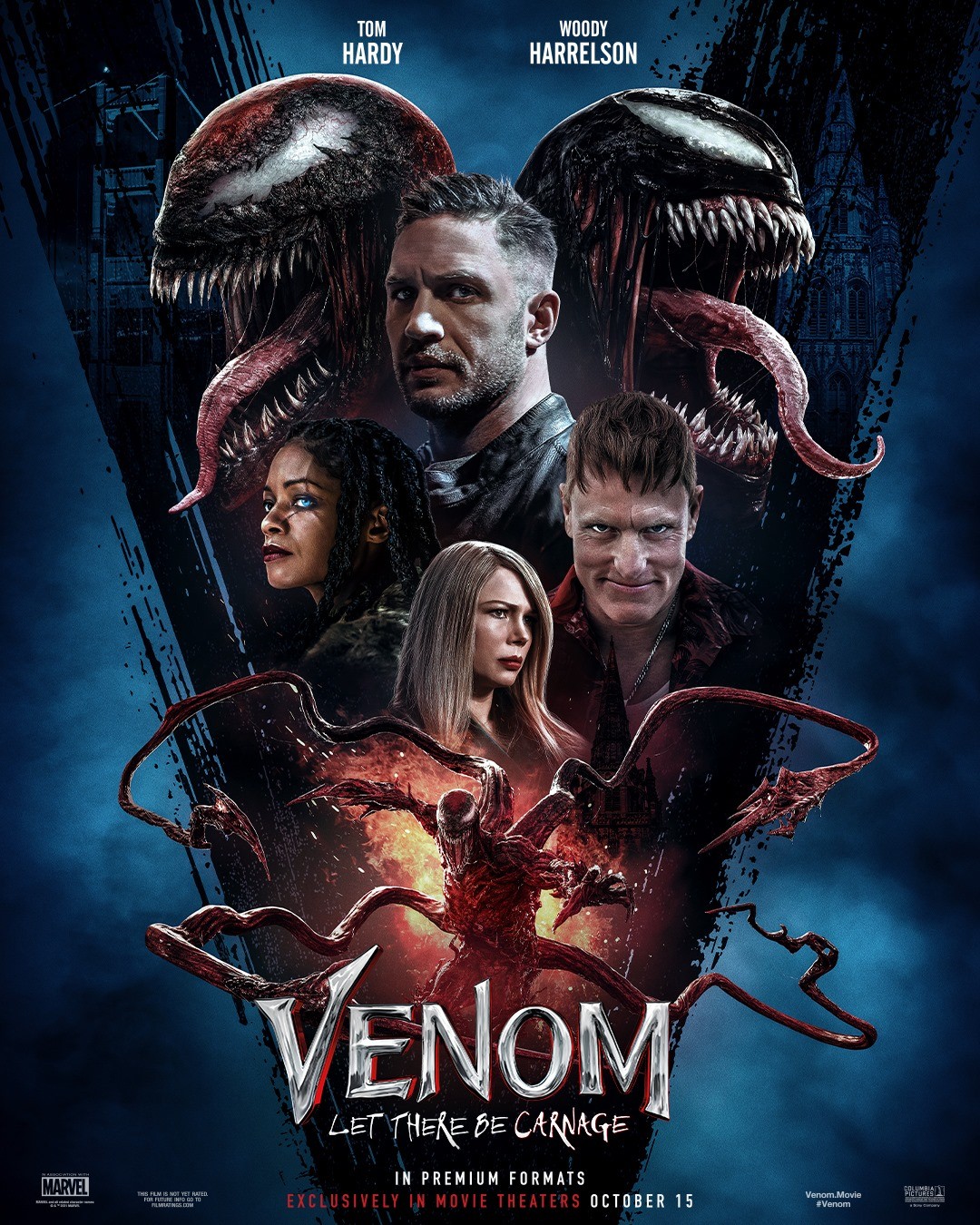 ‘Venom: Let There Be Carnage’ Review: Plenty of PG-13 Bloodshed and a Bromance to Boot

https://youtu.be/-FmWuCgJmxo Venom: Let There Be Carnage is a “more of the same” sequel to Venom, the film that introduced us to the cinematic version of the lovable but deadly extra-terrestrial symbiote from the Spider-Man universe. It ...
0
Average User Rating
0 votes
Please sign in to rate.
Film:Venom: Let There Be Carnage
Cast:Michelle Williams, Naomi Harris, Tom Hardy, Woody Harrelson
Director(s):Andy Serkis
Writer(s):Kelly Marcel
Genre:Comic Book, Superhero
Studio(s):Sony Pictures
MPAA Rating:PG-13