War For The Planet of the Apes gave me something I’ve been hoping to see but never thought would actually happen in an Apes movie. I won’t spoil what it is, but if you know my scatological tastes, you’ll go apeshit for it too.

In Dawn I felt like it was cool to see apes in a traditionally human war story, but if it weren’t apes, it would be fairly generic. In War, it would be a bold, daring, heavy drama even if it were humans. The fact that it’s apes only makes it more extraordinary.

Really, we needed the middle step to get here. It was cool to see apes terrorize San Francisco in Rise but to get to the heft of doing drama with realistic apes, filmmakers first needed to test the process in a familiar story. That worked, and now they’ve stepped past Koba’s ego and betrayal of Caesar to genuine tragedy.

War for the Planet of the Apes makes you sad for every ape death. Granted, we’re not attached to any of the humans but that’s the point of this whole series. The apes are more human. Colonel McCullough (Woody Harrelson) is more chilling than Dreyfus (Gary Oldman) in Dawn because McCullough really believes in his messiah complex.

The apes can speak fluent English now, though it sounds like it is still a struggle for them. That feeling of pressure gives it extra weight when Caesar (Andy Serkis) makes the effort to speak to humans. They still use sign language amongst apes because that’s easier for them, but some things must be spoken. The film does so much without any dialogue at all, it is remarkable. Matt Reeves trusts the visual to show us the story.

The film opens with guerrilla warfare with actual gorillas! You get a sense of how far gone the humans are with their ape-punny Full Metal Jacket writing on their helmets. War becomes a Great Escape POW movie for a while too. The action really focuses on dramatic moments. You get the spectacle, but it’s from the point of view on the ground or with Caesar.

The apes are at a low point. It seems the humans could actually win this. One human in particular makes a gross misjudgment but he had enough followers to set this war in motion. He’s also making the apes build him a wall, just so the allegory can’t be mistaken for any other time in human history besides our current one.

They’ve also gone and outdone themselves with the most endearing character in the series. Bad Ape (Steve Zahn) is probably in the top five most endearing cinema characters of all time. Perhaps that’s a list I’ll have to write one day. Bad Ape, so called by his mean captors, shows so much range. “That’s mine” broke my heart because he values mementoes. “New friends” was so warm and welcoming, but “I’m okay” was perfect slapstick for his bumbling.

War for the Planet of the Apes is also visually more arresting than Dawn. Even the starkest environments are more to look at than the woods of the northwest. 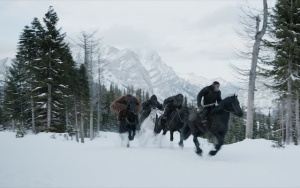 Prequels are not Franchise Fred’s favorite way to continue a franchise, although there’s a case to be made that this trilogy is a reboot. However, being set prior to Planet of the Apes does not compromise the drama because how it becomes the Planet of the Ape is not the point. The point is they made Caesar and all the apes worthwhile protagonists, so the drama in which they find themselves is compelling no matter the timeline. 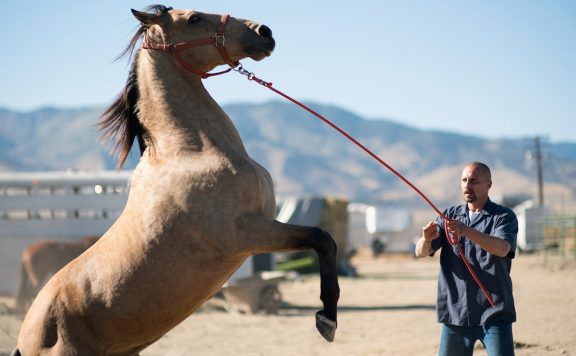