I’m not even going to try t sugarcoat it; I loved and adored Waves. I saw the film at the Telluride Film Festival and was blown away by it. The story is incredibly real and honest, the direction is top-notch, and there isn’t a bad performance in the film. Waves is one of those films that spoke to me on such a deep and personal level. It’s not an easy watch but one that takes time to digest and process. It will stick with you which is why I believe it is one of the best films of the year. I cannot recommend it enough.

I previously met and spoken with Alexa Demie, Taylor Russell, and Kelvin Harrison Jr. several times before this interview. They aren’t only three of the nicest people that I have ever had the pleasure of meeting in the industry but three of the most talented up and coming actors. I sat down with the trio for a brief interview about what it was like to show this film to audiences around the world and their own personal struggles with forgiveness. You can read the interview below or scroll down to the bottom to watch it.

Scott Menzel: Hello, my official favorite cast of 2019. It is wonderful to see you all again.

Alexa Demie: Great to see you.

Taylor Russell: Great to see you.

Scott Menzel: So since we last talked, how are you feeling? How has traveling with this film been?

Taylor Russell: Yeah it’s been great. It’s been really busy, but also there’s been a great response from people just in our Q and A’s and seeing people really bare their souls and talk about how they connect is really beautiful to see.

Alexa Demie: Yeah, we had a screening last night with a younger group of artists, actors, singers, and photographers and it was so… I was really curious to see how they were all going to take and they all cried together and were just blown away and really we’re saying it’s the future of filmmaking and they were really inspired by it so that was really cool to see.

Scott Menzel: Awesome. So I do have a little bit of a difficult question for you. I was thinking about what have I not asked you since I’ve seen you all so much. So, a lot of this movie is all about forgiveness and understanding what has happened in the past and being able to look past that. So, for each of you, what has been a situation in your own personal lives where you struggled with forgiveness?

Alexa Demie: I think with my family wasn’t the easiest upbringing and there was a lot of difficulty there. I left home at a really young age and so I think as I’ve grown up and through doing this film actually I’ve gained a lot of compassion and for my mother and just kind of for my father and just kind of just forgiveness within my family. Which is a cycle that just keeps going, but you get better at it? So yeah, I think that was one.

Scott Menzel: I remember that you shared it with me,  I appreciate that.

Taylor Russell: Yeah, I think Alexa and I had pretty similar upbringings. I think it’s been difficult with my family and with my relationship with my parents. They were really young when they had me and were just doing the best that they could. I think, yeah I’ve gone through a bunch of different perspectives and emotions with them and how I felt about a lot of things. Now I feel like I’m at a place of much more forgiveness than I have been before. Just seeing that they’re humans and they were just… everybody’s doing the best that they can all the time and ultimately they did a good job because I’m still alive. There are many thanks to be given to them and I appreciate who they are and what they’ve done for me and I’m really grateful.

Kelvin Harrison Jr: I think it’s like I have had a romantic relationship that was just kind of a lot. You kind of go through it and you start to realize, oh my God, this person is also growing up and is also trying to figure out who they are and I’m doing the same. Even though it may feel codependent and toxic at times, I have to learn to forgive myself for not knowing how to communicate the best way I could at that moment, what my boundaries are and what my needs are and navigating that and that, that’s kind of okay. I took that and I can learn from it and then move on it and grow in my next one. So it’s just more so self… the forgiveness of self, you know what I mean? Why would I put myself through so much? And also why would I put that energy back out there in a lot of ways, but yeah.

Scott Menzel: Well, sadly that’s it. Thank you guys so much for sharing.

Scott Menzel: I know it was very personal, but I mean we all talked about how much this movie means to me and I know how much it means to you. So I figured I’d get a little deep instead of asking you a silly question so thank you for your answers.

Alexa Demie: Love it, I love to get deep. 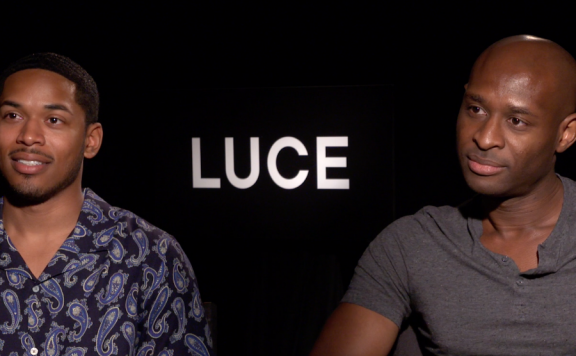