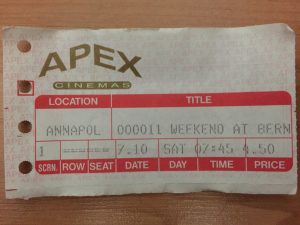 Weekend at Bernie’s was a surprising movie to get a sequel, mainly because the title character was a dead body. It was amazing they pulled off one whole movie with a dead guy, and now they were doing a sequel. Sadly, they did not have an idea to continue the exploits of a dead body on vacation, and they completely violated the artistic integrity of the Bernie franchise. Weekend at Bernie’s II was #NotMyBernie!

The whole joke of Weekend at Bernie’s was that Larry (Andrew McCartgy) and Richard (Jonathan Silverman) puppeteer Bernie (Terry Kiser)’s limp body to make people think he was still alive. In Bernie’s II, voodoo priests re-animate Bernie so he can stumble around. BERNIE IS NOT A ZOMBIE! BERNIE IS AN INANIMATE CORPSE! #NotMyBernie. 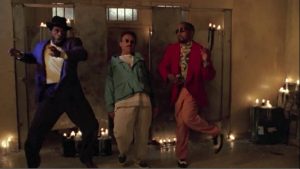 The reason Larry and Richard even had a Weekend at Bernie’s was because they discovered some fraud and brought it to Bernie’s attention. Bernie invited them to the Hampton’s planning to kill them, but the hit man killed Bernie first. Nobody noticed so Larry and Richard kept the ruse going, and hilarity ensued.

Bernie’s II does pick up shortly after the end of the first with Larry and Richard identifying the body. They’re back in New York so it’s at least Monday morning, or probably Tuesday since the first Weekend was Labor Day. Is it just me or does their hair not match the first movie? Bernie, however, is spot on. 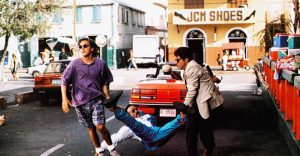 For discovering Bernie’s embezzlement they’re fired. Meanwhile, Bernie’s co-conspirator hires the voodoo guys to find out where his share is. Larry and Richard go to St. Thomas to try to clear their names, so this is already a lot more hoops to jump through to have another Weekend at Bernie’s, although props for making it international. 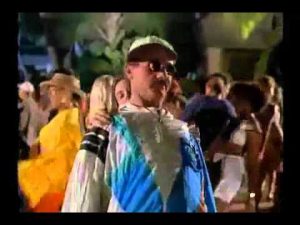 The hook of the voodoo is that Bernie only walks when there’s music. This allows him to join a conga line, but also to slump over again as soon as the music stops. Kiser gives a great performance, dancing and bopping like a marionette, moving without actual consciousness. His underwater walk must’ve been a tremendous feat to film. Maybe he had a breathing tank in his pocket. He probably enjoyed getting to do more than just be dead weight but it’s still #NotMyBernie. 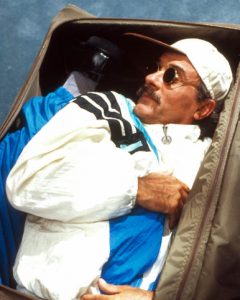 It’s a classic sequel problem, in trying to add something new they’ve invalidated the original premise. The joke was all the abuse Bernie’s dead body took, and onlookers were outraged but we knew he couldn’t feel it. The sequel delivers a few moments like that when Bernie gets caught in a parasail and bitten by a shark, harpooned or stuffed in a suitcase. That’s my Bernie, but are we to believe Larry actually checked Bernie as baggage? They still X-rayed luggage in 1993, right? 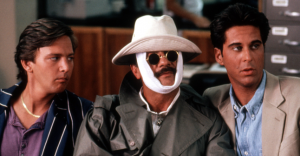 There’s really only one scene where they pupeteer Bernie, when they go to open his safety deposit box. They do start to address Bernie’s odor. It’s probably a big convenience of the original movie that Bernie’s corpse didn’t stink after three days. By II it may be a good week. They solve it with deodorant, which is good enough so they don’t have to mention it the rest of the movie, but starting to slack off with dead guy humor. Come on, think of funny scenarios in which Bernie can stink! Surely his underwater escapade washed off the deodorant. 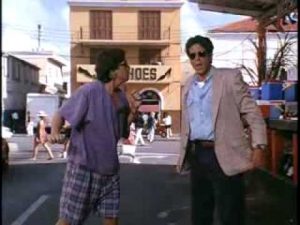 The bumbling voodoo guys, Henry (Tom Wright) and Mobu (the great Steve James) are distractions, chasing loose chickens around when we’ve come to see Bernie. Bernie’s body keeps changing hands between them and Larry/Richard throughout the movie. It’s too much business getting in the way of jokes. 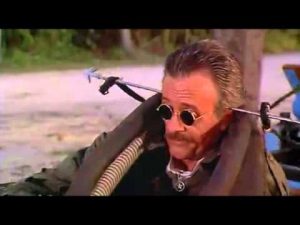 There should have been a Weekend at Bernie’s III to redeem the franchise. Bernie would be in rigor mortis even though Kiser would be a decade older by then. I think they could still do it. If they’re still doing Die Hard, Star Wars, Rambo, Rocky, Indiana Jones and other classic franchises with their aging stars, bring back Bernie. I’m sure Kiser looks different now but the body will be so decomposed after decades that that will be part of the jokes.