Welcome to Marwen was the highest on my list of most anticipated films for 2018. As the date got closer and closer and I didn’t hear any buzz, I began to worry. After finally viewing the film, I am sad to report that the film as a whole left me underwhelmed. The trailers and the story lead you to believe that the film will be emotionally riveting and stunning, but it never quite makes the mark of what you’re expecting from the film.

Welcome to Marwen tells the story of Mark (Steve Carell) an assault victim and former artist who has tried to piece his life back together after a brutal attack stole all his memories and his ability to draw. To manage his life and still create art, he has recreated his life in the form of dolls that live in 1940s Belgium in a fictitious town called Marwen. The dolls in Marwen are all women based on women in his life. Trying to cope with things in his life, he works through them with the dolls, fighting both symptoms of PTSD as well as alcoholism, Marwen helps Mark to cope with the difficulties in his life, included testifying against the men who attacked him.

This is one of the films that I really wanted to love, but the parts did not equal the whole. There are so many fantastic parts of the film that are remarkable, but they don’t do enough to save the film. The animation, which I imagine took quite a long time to complete, is stunning. The way they’ve combined the animation with the faces of the actors all while still making them doll-like is just stunning. The opening scene of the film starts with a bang, literally, and leaves you craving more. Steve Carell is incredible in this role, balancing a character that has so many nuanced parts, he does it with ease. He is vulnerable, struggling, traumatized, and a bit of an oddball, but Carell wholly embraces him and brings him to life for the audience.

The dolls themselves are engaging and have a great deal of screen time, but where I think the film falters is that we don’t get to know the women on whom these dolls are based. We don’t get to see how they interact in Mark’s life and how they impact him as a person. I think the story could have been stronger showing Mark’s relationships with these women instead of the dolls. I can understand that it was probably a decision to make the dolls the center someone based upon the real story, but I think for a Hollywood version of the film, we needed a little more of the human interaction.

The culmination of the film is pretty much shown in the trailers, so that is a difficult thing to get past especially since the trailers make it so much more intense than it feels in the film. This may be because we’ve seen it play out in the trailer multiple times, but it is lacking. In pieces, the story has real depth and emotion, but the film doesn’t seem to capture it in a way that is accessible for the audience. The relationship between Mark and Nicol (Leslie Mann) is played up so much more in the trailer than it is in the film. It seems almost like the trailer is misguiding intentionally. The rest of the female cast does great work in their roles with the dolls, but the women they are based on, like I said, aren’t developed or seen enough to build a bond with the audience. We needed to feel the love and appreciation that Mark had for these women and the dolls, and it seems to miss the mark, unfortunately.

The potential for a great film was there, and I can see it shining through some parts of the film. Steve Carell gives a great performance as Mark, and there are moments where we get glimpses of what the film could be, but it just seems to pass us by in the end. My expectations and hopes for the film were sky-high, so maybe those with lower expectations will appreciate the film more. 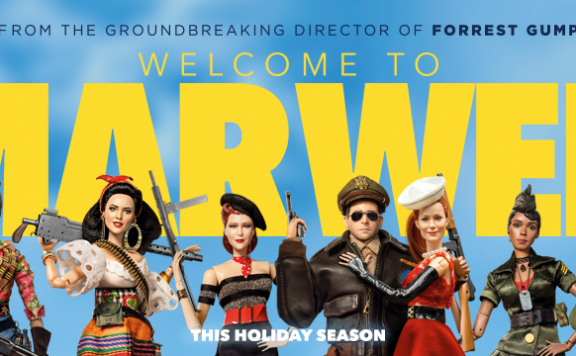