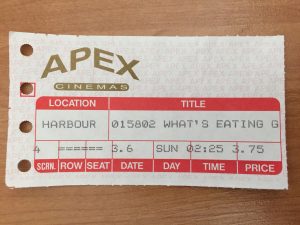 The movie adaptation of What’s Eating Gilbert Grape opened 25 years ago today, although I didn’t see it 25 years ago. Gilbert Grape wouldn’t come to Annapolis until March of 1994. It wasn’t even my choice to see it then. My neighbor wanted to see it so I went with her, because she had certainly sat through plenty of Van Damme movies for me. The Grapes won me over within a few minutes and this became one of my favorite movies ever. 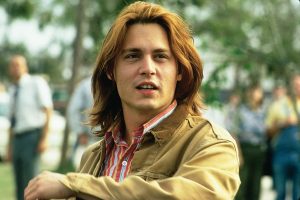 I was already a big Johnny Depp fan from Edward Scissorhands and Benny and Joon. Gilbert Grape was just a regular guy and Depp was just as compelling as the guy trying to survive a world full of quirky characters as he was being the quirky character himself. It turns out that part was really acting because in real life Depp keeps punching people. He should be more like Gilbert. 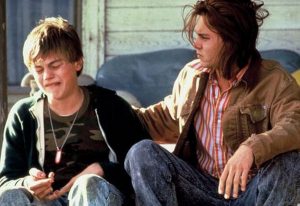 This was my introduction to Leonardo DiCaprio as a serious actor (I then watched This Boy’s Life for more). I remembered him as the new kid on Growing Pains and in the straight to video Critters 3 and bore no ill will towards DiCaprio becoming a serious actor. This was just the first example I saw and boy, was it a doozy.

It can be cynical for actors to play mentally challenged characters (the Oscar bait roles) but every subtle tic and mannerism of Arnie Grape was just DiCaprio bringing this wonderful character to life. He deserved the Oscar for this role but lost to Tommy Lee Jones for the more popular The Fugitive. No disrespect to Jones, but he also beat Ralph Fiennes in Schindler’s List, John Malkovich from In the Line of Fire and Pete Postlethwaite from In the Name of the Father. I like action movies getting the consideration, but among this batch it felt slight. 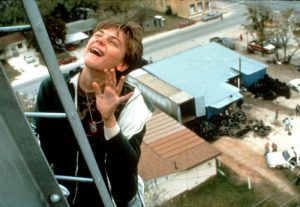 Anyway, I spent my whole first viewing of What’s Eating Gilbert Grape worrying Armie was going to die. He’d outlived his medical diagnosis and he kept climbing things. I was sure he was going to fall but that would have been the manipulative Hollywood way to play the story. What’s Eating Gilbert Grape is more interested in celebrating what’s special to these characters. 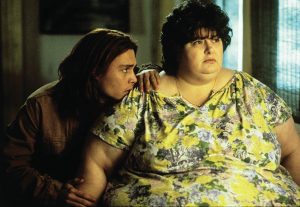 The most publicized role at the time was not even DiCaprio’s transformation as Arnie but Darlene Cates as Gilbert’s mother Bonnie. The script called for her to be overweight enough to be a spectacle yet the movie treats her with sympathy. Gilbert lets local kids gawk at her through the window, but he thinks there’s no harm if she doesn’t know. Later when she has to be transported from the house, Gilbert protects her from the spectacle that would ensue. Cates was a revelation and this led to some more acting roles. I read she’d lost some weight later and sadly passed away last year. 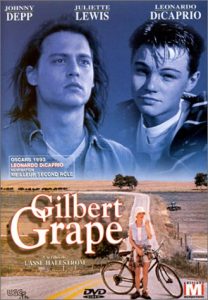 Endora is a small town where everyone knows each other and I can’t help but think it’s economic prospects would only get worse after 1994. This was the beginning of big box stores were putting small town shops out of business. Wal Mart would probably put Foodland out of business a decade later.

The point of the story seems to be that the Grape family and citizens of Endora have lives just as interesting and emotional as anyone anywhere else. They still have daily problems like reinforcing the floor of the Grape house, planning Arnie’s birthday party or keeping him safe. 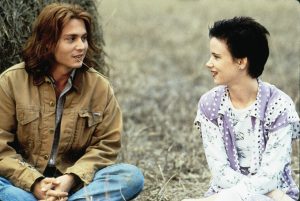 The arrival of Becky (Juliette Lewis) in a broken down trailer is the biggest thing that happens in Endora all year. No one in Endora understands Gilbert so Becky is his best chance to relate to someone. Now that I’m older I realize it’s highly unlikely that the one new arrival in town is perfect for you, but that can be the one bit of movie magic because Gilbert deserves to know the rest of the world is not like the Grapes or Endora. He’s not crazy for seeing the futility and self-destructiveness in his affair with Betty Carver (Mary Steenburgen) or mortician Bobby McBurney (Crispin Glover)mocking the corpses. 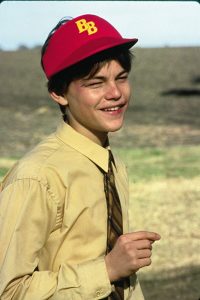 The second biggest event in Endora is the opening of a Burger Barn and it is really important to Tucker (John C. Reilly) to get a job there. It’s a rather quaint ambition. As I understand it, hiring is pretty liberal in fast food, but Gilbert and the film supports Tucker and celebrates him doing Tucker.

Perhaps What’s Eating Gilbert Grape was a revelation to me because I was already a fan of high concept movies back then. I went to see movies because of what they were about and sometimes because of who was in them. There was no catchy logline to Gilbert Grape but if you love the characters, you can watch them do anything. If I told you What’s Eating Gilbert Grape was about fixing a house and throwing a birthday party it wouldn’t sound like much. But I tell you about Gilbert, Arnie, Bonnie, Becky and Tucker and you want to see how they fix the house and throw the party. 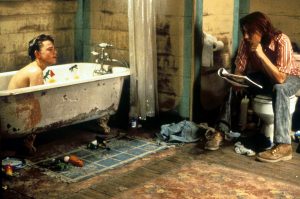 Taking care of a special needs child could be big enough for a logline but Whats Eating Gilbert Grape doesn’t lead with that card. It’s just portraying it, not calling attention to it. Knowing what we know about these characters, small scenes become major events. Bonnie leaving the house to bail Arnie out of jail is a powerhouse scene. A last minute birthday cake leads Gilbert to enemy territory at Foodland.

It’s also remarkable how many cast members have been in so many of my favorite movies. It’s a real all star show: 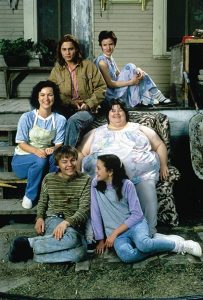 Depp: Edward Scissorhands, Donnie Brasco, Pirates of the Caribbean: The Curse of the Black Pearl (not the sequels).

Mary Steenburgen: Parenthood, Back to the Future III, Elf

Crispin Glover: Back to the Future, Charlie’s Angels

DiCaprio: The Quick and the Dead, Titanic and The Aviator. I liked his Romeo + Juliet too and Inception is ambitious.

I loved What’s Eating Gilbert Grape so much I read the book to spend more time with the characters. I only read it once, so I don’t remember it as well as the movie I’ve watched repeatedly over the last 25 years but it seemed faithful. Author Peter Hedges adapted the screenplay himself and director Lasse Hallstrom nailed the genuine smalltown vibe without feeling precious.