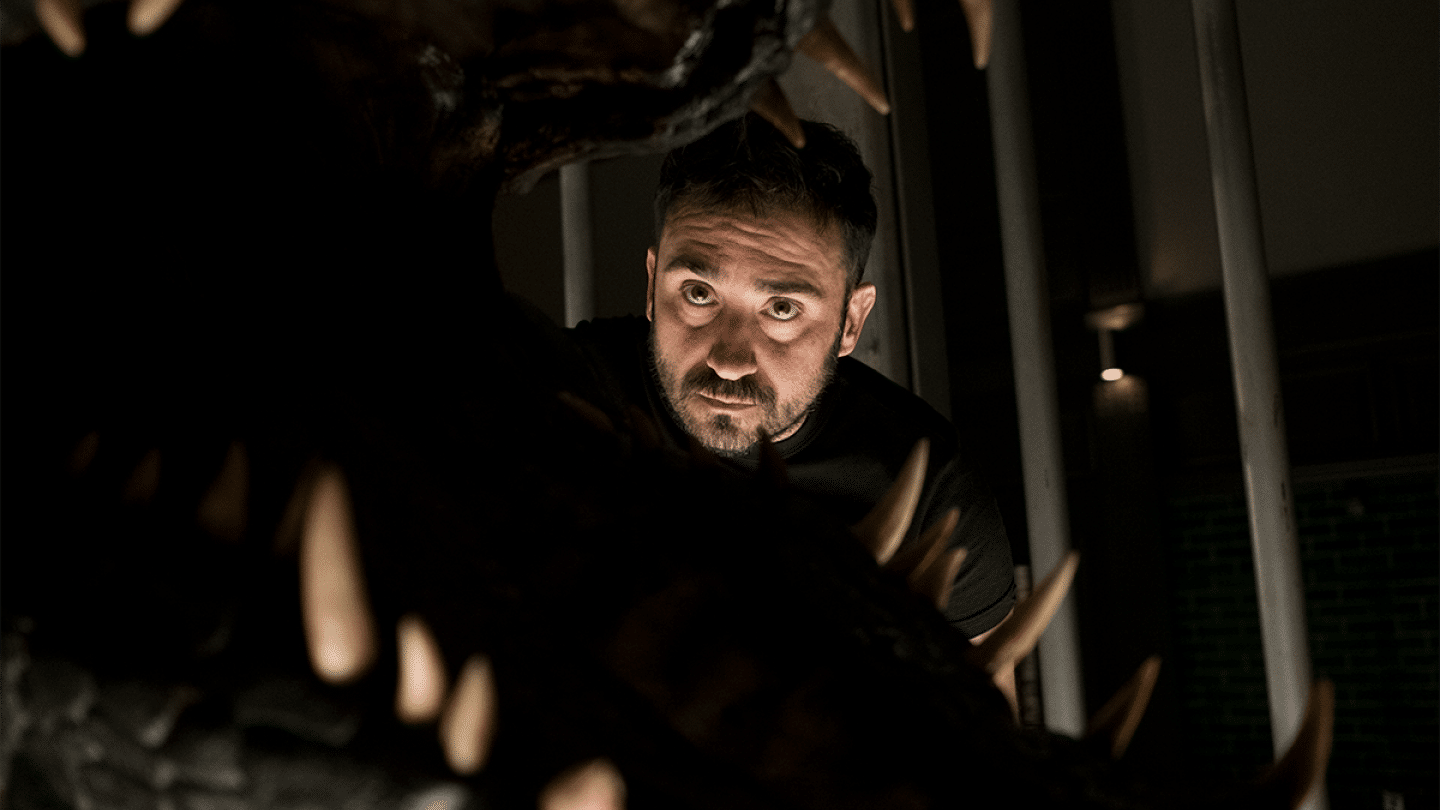 WLE Exclusive Interview: J.A. Bayona on Jurassic World: Fallen Kingdom and the Future of this Franchise

Jurassic World: Fallen Kingdom opens in theaters throughout the United States and Canada this evening.  As someone whose love for cinema forever changed after seeing Jurassic Park in theaters back in 1993, I am happy to report that J.A. Bayona’s latest entry in the Jurassic Park Universe is my favorite since the original.  I recently got the chance to talk with J.A. about the film as well as his involvement with the future of the franchise.

Scott Menzel: Hi, how are you?

J.A. Bayona: I have a nice view in my room, so I can do interviews with a nice view. That’s what I’m getting from Hawaii right now.

Scott Menzel: Well, that’s awesome. First and foremost, congratulations. This is my favorite Jurassic Park film since the original.

J.A. Bayona: Thank you. Thank you so much. That’s a great compliment.

Scott Menzel: I really loved it. I’m excited to see it again, and I can’t wait to do so. So my first question would have to be, how big of a fan were you of this franchise before coming on board to it?

J.A. Bayona: I’m a fan of the Jurassic movies, but overall, I think I’m a fan of Steven Spielberg. You know, in the Jurassic movies, you can find some of the best scenes that Steven has ever done. So for me, that was the goal when I was working on Jurassic World was taking the stories from Colin and trying to put them on the screen in the most effective way possible and push for those moments where I see space to create memorable scenes like the ones I remember from the first two Jurassic movies.

Scott Menzel: That’s great. I tweeted right after I saw the movie and I said, the original film was a game changer. For summer blockbusters, we’d never seen a monster movie quite like that one, you know, where dinosaurs come alive and are walking the earth with humans. It was incredible and I feel like ever since that first film the magic was sort of missing. And I didn’t really feel that magic come back until I’d seen your take on this world.

Scott Menzel: No problem at all. Did you have any fears or concerns to step in and take on this new entry?

J.A. Bayona: Not really. For me, it was pretty exciting the way the story takes the Jurassic universe one step forward. I really like this idea, and for me, it was something very exciting to be involved with of portraying the ending of the island. In the movie, there’s a lot of talk about the first time we saw a dinosaur. And somehow we recreated that moment of the ending of the dream and we put the steps in answer to something twenty-five years ago. And you put that dinosaur and you say goodbye to the island, and it’s a very emotional moment. I think somehow we all have a very emotional connection with these movies because we saw them when we were very young or even kids. And having the chance of making a big movie, with a big moment, and a big finale of the island was something very exciting. And from there, the movie takes you to a place that you don’t expect and opens the gate to a world that you’ve never seen before.

So all of those ideas, I was very excited for, and I was definitely seduced about what Colin told me about the story was the second half where you have these dinosaurs inside a mansion and had this kind of gothic element that I felt very comfortable. And for me, it was the perfect setting to create moments of suspense. And when I think about Jurassic Park, I really appreciate those moments of Hitchcockian suspense that Steven was always able to create.

Scott Menzel: I think you nailed it. I mean, that’s a great explanation of this entire film. 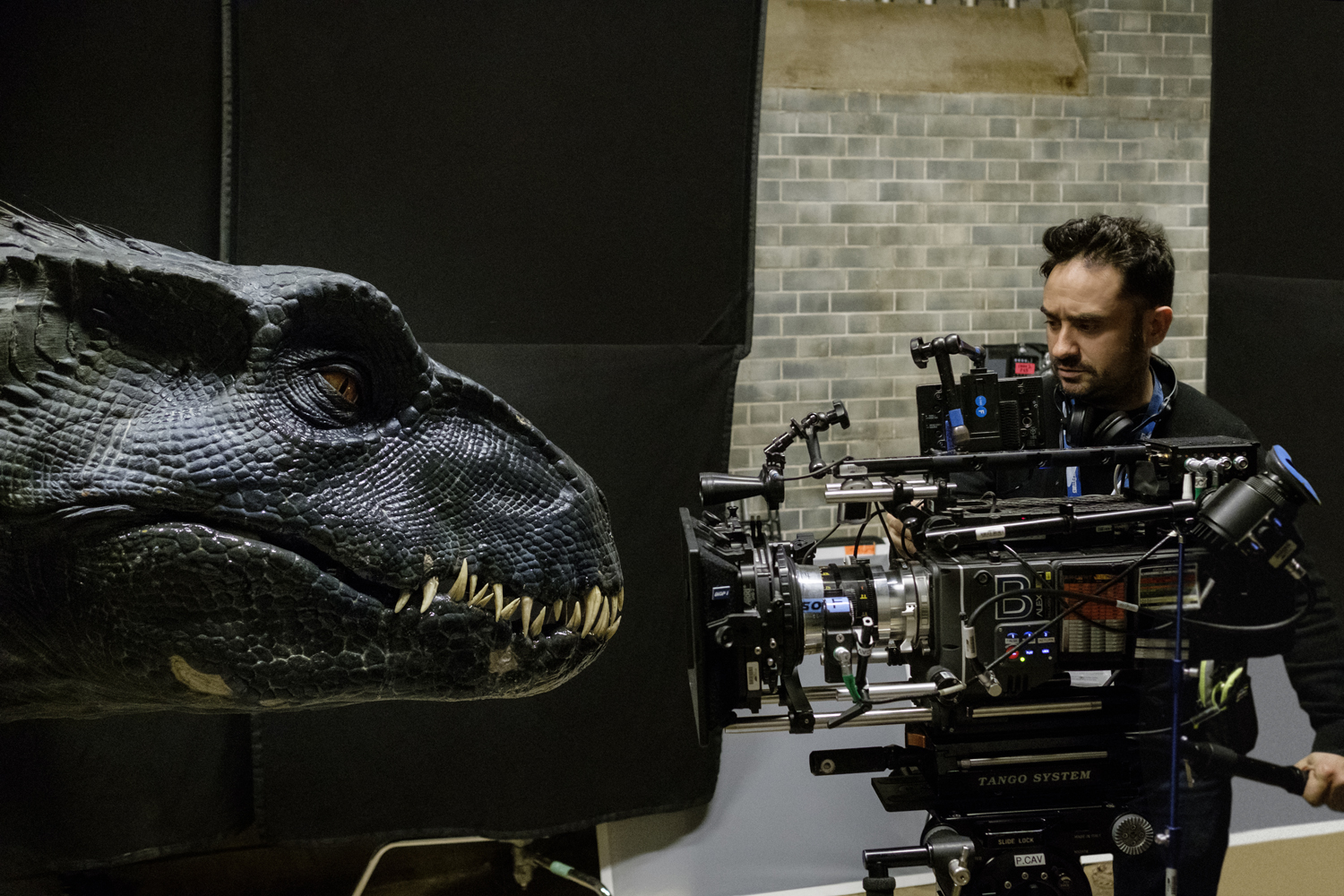 Scott Menzel: Your take on this story felt unlike any of the other films in the franchise. And that’s what stood out to me and I’m glad you brought this up because it was something that I was going to ask you. This movie has something that I have not seen in a Jurassic Park movie before, and that includes the original from 1993. This film has a lot of emotion. I think there are at least two scenes, maybe three, where I teared up. I’ve never felt anything for the dinosaurs before and I’ve been a die-hard dino fan my entire life, but there are two scenes that come to mind, one when they’re leaving the island, and then the scene near the end, which I won’t spoil that were incredible. How did you create these incredibly emotional moments?

J.A. Bayona: In the script, there was this idea of leaving the island behind and seeing the dinosaurs that you left on the island. That scene must be an emotional moment because that moment has an anchor in the last scene that we see in the film. That is a moment that you will want to talk about. But somehow it was very important, especially for Claire to be very emotional because that’s somehow creating the basics where the last scene where Claire needs to make the decision about saving the world or saving the dinosaurs. That scene at the end somehow needs to have that emotion from the island to make it more emotionally grounded.

But both scenes were in the script. I think somehow this idea of emotion comes from the fact that it is a movie that talks about empathy and I really like this idea of talking about accepting what we don’t understand. And that thing that we don’t understand is dinosaurs, but it doesn’t mean that it’s a dinosaur, but it’s us. And I thought that was a major step forward in the Jurassic universe.

I think it’s very interesting how you discover Owen at the beginning of the film, trying to escape from the world and the building of his own desert island. But the problems that we live in right now are global. The biggest problems are global problems. You cannot escape them anymore. Malcolm talks about nuclear power. You can try to escape to your desert island, but you will never escape from nuclear power.

So basically that’s the lesson that Owen learns at the end of the story. It’s like you cannot escape from these things anymore because it’s affecting us in a very straightforward way. And there is a moment that I really like in the film, which is the moment that the characters are performing a surgery on Blue. And there’s a moment that you can see the characters doing the operation, and at the same time, you’re seeing Maisie seeing Owen with baby Blue in a video and there’s like three layers. And the three layers takes you to this moment of empathy where you connect these three characters. You connect Blue, you connect Owen and you connect Maisie and you create that sense that everything is the same. We are all part of the same thing, you know. And that for me is the ultimate goal to make the others understand this idea.

Scott Menzel: Oh, I loved that scene. It’s so hard to talk about the film without spoiling it, but I loved the whole twist about Maisie too. I loved what you did to create that. Like, that was something that was very unexpected. I didn’t see that coming, and I think you’re right, it adds a whole another layer to this film and the storytelling.

J.A. Bayona: I know, it’s very difficult to talk about the film without spoiling it.

Scott Menzel: This film ends in a way that I felt was very similar to that of an independent film, where it is kind of open-ended. I am hoping that you are going to be coming back for the next one. And do you have any ideas or can you not even talk about it, where the next installment is going, if you know anything at all?

J.A. Bayona: I really don’t know much. There are some details and some lines in the story that is there because from time to time Colin came to me and asked me to put them into the film because he was already planning and deciding the third movie. But I never had an in-depth conversation with Colin about it, so I cannot tell you much. I think, of course, we are opening the Jurassic universe, to a place that we’ve never seen before, and it seems that the possibilities are amazing in that sense, but I don’t really know much about it.

Scott Menzel: Okay. So when you were directing this film, how was it different from directing your other three features?

Scott Menzel: Okay. And then the last question, I know that Guillermo del Toro is a mentor to you. Guillermo told me back in January that he saw an early cut of the film and whispered in my ear, how amazing it was and I was riding that wave of excitement ever since I talked to him. Has there been any talk of you and him working together again on a film?

J.A. Bayona: Yeah, in fact, every time we see each other, we talk about the possibility of working again. We definitely want to work again, and we would love to be involved in a big movie again. I consider Guillermo, my mentor. He was the guy who made my first movie possible and we still talk every time I feel that I need his support, I know where to call him, and I get his advice, and I feel blessed for having a chance to do that, you know? So, yes, I would love to work on a film with Guillermo that is for sure.

Scott Menzel: I hope that someone makes that happen someday soon. Well, thank you so much for talking to me. I really loved this movie, and I know that the reactions are kind of mixed right now, but I think people are just really shocked by how different it was, but remember change is good. Change is good. We don’t have to always follow formulas all the time, and I thank you for doing that, and I really hope that you work on the next one.

Scott Menzel: It was very nice talking to you too. Have a great rest of your day.