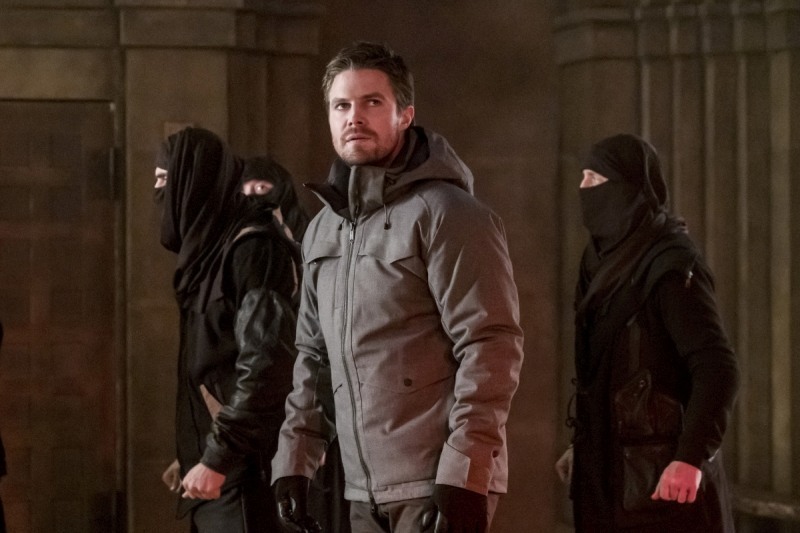 Warning: This review will be filled with spoilers.

Allow me to play Captain Obvious for a second… Arrow is simply at its best when it focuses on its main plot of the season. I understand that a season with 23 episodes has to have filler, and sometimes filler episodes can be great. However, it’s episodes like this, “Checkmate” that bring the real meat to the table. It’s always so exciting to see our main protagonist’s reaction after learning a shocking revelation about who their real nemesis is. And that is what made this one of the most thrilling episodes of the season. The cat has been let out of the bag. Oliver knows that Adrian Chase, a trusted friend and advisor, is the very villain he’s been chasing throughout the season, Prometheus.

First off, can we, like, seriously give a round of applause to Josh Segarra for nailing his wickedly terrific performance here? I mean, wow! This is exactly what I was hoping for. Now that Prometheus is out in the open, Segarra is free to play his roles as Chase and Prometheus as sinisterly as he wants. Chase has Oliver and the team by the balls, and they know it. That’s why he can walk into City Hall, do his District Attorney job and stare at his enemies with a grin on his face. That’s exactly what he did, and dang, did I love it. His confrontation with Lance and Rene was so chillingly good. I love it when a villain can play mind games like that. And hey, he succeeded by getting under Oliver’s skin and into his mind. Segarra has done so well this season with his character, dropping little hints of his villainy. Now that he no longer has to hide it, I can imagine how much fun Segarra had playing this truly evil role. What makes Chase/Prometheus work so well is his sinister tone, laying it all on the line, showing us that he means business.

I believe Prometheus has already become one of the best villains of the series. He is a strong, deadly opponent and a skilled archer and fighter, but he has beaten Oliver with his intellect. He has taken all of Oliver’s strengths and turned them into weaknesses. Chase has been ten steps ahead of Oliver from the beginning, and he still hasn’t revealed his master plan. That is what I love about this villain. Every week we get a big reveal on Chase/Prometheus, and there’s still so much mystery and uncertainty surrounding him. He proved that his cause was more important than anything else by killing his own wife when Diggle presented her to him. It was a nice attempt to break Chase having his wife plea with him to turn himself in to the police, but I think we all knew he’d kill her to protect his secret. Wonder how Oliver and Diggle didn’t see it coming.

The fight between Oliver and Chase was vicious. Oliver let out all of his rage on Chase, and it still wasn’t enough. I think Chase might actually be stronger than Oliver. Of course, Chase was filled with plenty of rage of his own since his wife was exposed to the truth and he had to kill her. Chase just appears unbeatable at this point, and that’s without having any powers like Damien Darhk.

Things were made so much more worse for Oliver finding out his former ally Talia al-Ghul was now Chase’s ally. I’m glad to see Talia made it to the present. I was wondering if she was still alive in the present, how she and Oliver would cross paths after he had killed her father in season three. Apparently, he never knew Ra’s al Ghul had another daughter until know. I like how while Chase has let everything out in the open, Talia didn’t hesitate in telling Oliver she wishes to see him suffer at Chase’s hand. Now I wonder if maybe she’s been posing as Vigilante when Chase can’t. Sorry, I can’t let that theory go. Either way, I knew there had to be a third person involved in Chase’s crusade. There’s probably even more. By the way, I ask again, where the hell is Evelyn? I do wonder what Talia’s role is really. I want to know how she got involved with Chase. It’s interesting to note that Chase said that “killing me would be like killing yourself” line in the present, while Gregor said the same thing to Oliver in the past. That can’t be a coincidence. There is probably a connection to the Bratva, Talia and Chase, but that remains to be seen. 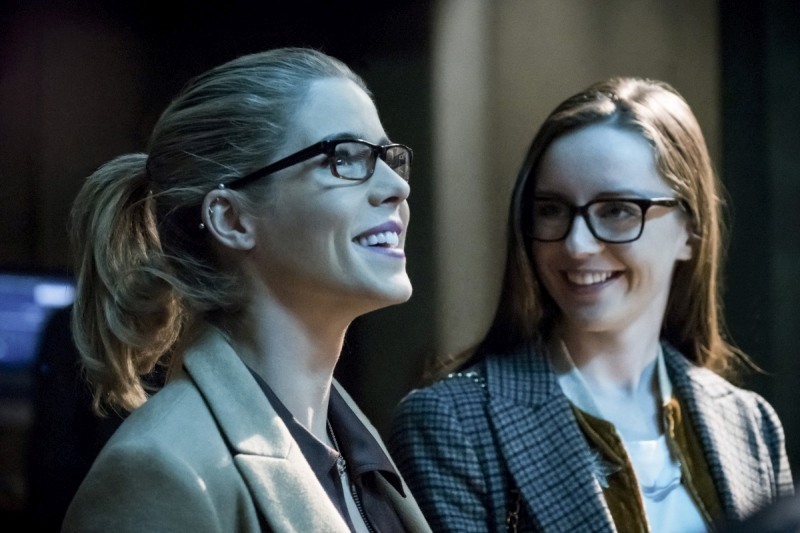 Speaking of Bratva, I’m really wondering where those flashbacks are going now. There seems to be very little development as of late. Plenty of action, but little development. Talia hasn’t even been a presence in the flashbacks lately. I hope there’s more to the flashbacks in the coming weeks than just Anatoly and Oliver constantly saying they have to kill Gregor. I really don’t want these scenes to be like season four with a five minute story dragged out in the next seven episodes. I will admit, I enjoyed all the gunplay, even though none of these Russian gangsters could shoot worth a damn, and Anatoly seemed like he was using an infinite ammo cheat code in a video game. Anatoly does shine the most in these flashbacks though. I especially liked how he made fun of Oliver’s Hood outfit, calling him Robin Hood and questioning why he was distorting his voice.

Oliver did a lot more brooding, but because Prometheus has gotten the best of him, it’s totally understandable. Prometheus is truly succeeding in what he set out to do, which is destroy Oliver. It’s sad seeing our hero look so defeated. Though this isn’t the first time he’s been in this kind of situation, it seems like this event has hit him the hardest. And it probably has because of all the good he has tried to do with the new teammates and his work as the mayor. He just can’t seem to win. He mentioned he should have never gotten involved with Susan Williams. I’ve been saying that throughout the season because she came off as a snoopy reporter, and he had a lot of secrets. But now that the two actually care for each other and it’s Oliver’s link to happiness, it really feels sad for him to say that. I’ll admit, I’m not attached to Susan all that much, so in truth, I don’t really care what happens to her, but it’s nice that the team found her alive. Where she goes from here, I’m not sure, but it would be cool if she gets some further development so the team’s efforts to save her don’t go to waste.

Seems like Felicity is going further and further down the rabbit hole over at Helix. It was only a matter of time before Kojo Sledgehammer expected Felicity to hack into some very illegal places. After all, she had been using all of Helix’s information and resources to help Team Arrow. So she helped Team Helix by hacking into Homeland Security to send some drones of course. That’s a big no-no. So she’s really getting in over her head, and she probably doesn’t know how she’s going to get out of this. She keeps asking her teammates to trust her, but she might eventually end up on opposite sides, even if it’s unintentional. I don’t really trust Kojo. She comes off as sweet and geeky, but she might just be a villain. The Helix organization itself is probably out to do some pretty bad things in the world.

Adrian Chase pretty much dominated “Checkmate”. His toying with Oliver is what made the episode tick. The cat and mouse tone made for a thrilling, swiftly paced hour of Arrow. If the rest of the season can focus entirely on everything revolving around Prometheus and his allies, that would be perfect. No more filler episodes from here on, please. Right now, we’re looking at the good stuff.

Arrow: 'Checkmate' Review No more hiding. Warning: This review will be filled with spoilers. Allow me to play Captain Obvious for a second... Arrow is simply at its best when it focuses on its main plot of the season. I underst...
0
Average User Rating
0 votes
Please sign in to rate.