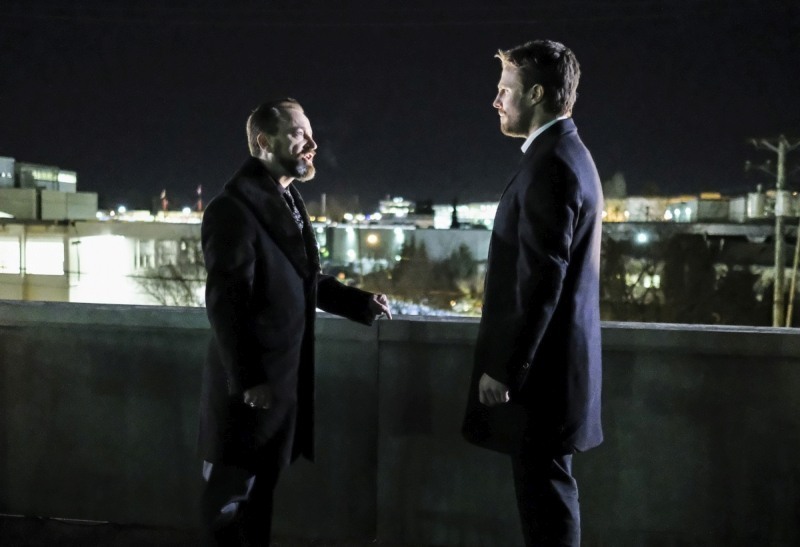 A deal breaker with the Bratva is not recommended.

Warning: Full spoilers will be discussed.

Showing absolutely not signs of slowing down the momentum season five has picked up recently, episode 18 of Arrow continued the conflict between Oliver Queen and Adrian Chase, while bringing on a new conflict with Anatoly and the Bratva in present time. With Arrow taking yet another near month long break before the final episodes air, we got a hyper dramatic storyline between Diggle and Oliver with plenty of exciting action and more grand performances to chew on until the show returns.

Carrying over from last week, we saw that Adrian Chase had truly broken Oliver mentally and gotten so deep into his head, Oliver would not only ditch his crime fighting crusade, but order the rest of the team to stand down so they would not get hurt. Oliver may have admitted to liking killing bad guys, but he’s missing the bigger picture. Leave it to good ol’ Diggle to remind him (again) of all the good he’s done, and how sometimes kiling had to be done in order to protect the ones they loved. That’s why I’m glad Dig used his own situation when he shot his evil brother as an example. It was cool to see Dig give the same advice Oliver gave him about using his alter ego as a means for redemption. This also showed that Diggle has finally forgiven himself for killing his own brother. Andy was a prick anyway.

Stephen Amell has been pumping out sensational, career defining performances every week. Just add this to another one of his bests. His range was excellent, going from a broken man, to an apologetic lover and friend, then frustrated, angry, and eventually back to the heroic son of a gun we know and love. So yeah, singing Amell’s praises is nothing new because it happens often. However, I love it when I can praise David Ramsey. And man, his work here was awesome. Ramsey has a tendency to, well, over act sometimes with his emotions, especially with anger. Thankfully, he delivered a well balanced and passionate performance this week. His character had the agonizing task of trying to make Oliver see reason, and take over as leader of Team Arrow. Ramsey pulled it off with grace. Whenever Stephen Amell and David Ramsey act together, we always get something special, but put this week’s scenes in a highlight reel. The bromance is real.

Sucks to be Susan Williams right about now. After all she’s been through being held captive by Chase, being part of Oliver’s world, she just had her heart broken. I know I’ve stated that I didn’t much care for the relationship between Susan and Oliver before, and that it was dumb for Oliver to ever be with a reporter in the first place, I gotta say, that breakup scene was rough. It was done for all the right reasons, and it was inevitable, but it’s still a sad outcome to both parties. 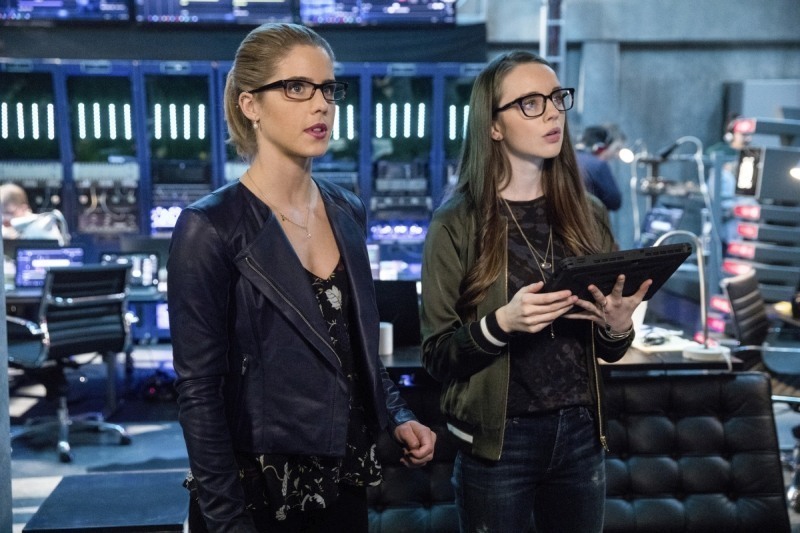 Adrian Chase was very much a wicked presence this week, but his role was scaled back a bit in favor of featuring the Bratva in Star City. Oliver not knowing what else to do, hired his dear vodka drinking friend and Bratva brother, Anatoly to kill Chase. In exchange, the Bratva would gain access to a medical drug so they can make some kind of narcotic. OF course, you don’t make a deal with the Bratva and break it. Once Oliver got back on board with Team Arrow, the deal was off. This put’s Oliver and Anatoly at some dangerous odds. This is where the flashbacks this week and the present parallel, seeing the two men going from strong allies to bitter enemies. Anatoly feared he’d become a Bratva leader like Gregor, and apparently he has. I liked Anatoly, so a part of me was like, let him take the damn drugs. But there needed to be a tense action set piece between Anatoly’s men and the team. And, yeah, stopping him was the right thing to do, I guess.

If the deal had gone through, not that the Bratva was ever going to succeed in killing Chase, this would have been something Oliver truly would regret. Not to mention, a big stain on his administration. Now what’s left up in the air is if this decision will come back to bite Oliver and the team in the ass, or if Anatoly will squash the beef because he has too much respect for Oliver. I’m thinking the latter will happen after the talk those two had on the rooftop. Why does everything get resolved on rooftops?

Helix didn’t appear to be the villainous organization I’ve been hyping them up to be this week. They actually helped somewhat with getting evidence of Chase wearing the Prometheus suit. Of course, it was really Felicity and Curtis who actually got the evidence, but Helix pointed them in the right direction. This does not mean Helix is no longer a threat. Kojo casually mentioned they knew all about Team Arrow. It just remains to be seen if they can be allies or eventually put the team in harm’s way.

Last week, I mentioned Oliver may not wear the Green Arrow suit and kick ass for at least a few episodes. Looks like I was partially right. Although I did not expect him to spring back into action so soon – but I’m totally glad he did – Oliver wore just a simple tactical outfit, deciding he needed to earn the right to wear the hood again. The way this episode played out, having Oliver snap out of his funk was the best way to go rather than have him walk around like a useless bump on a log while the team continued their crime fighting duties. It was also interesting watching the team work with limited resources due to Oliver blocking access to the bunker. Since they didn’t have any tech, members like Diggle and Dinah had to utilize their fighting and takedown skills to fight off the Bratva. So that made things fun. Curtis was smart enough to keep his T-Spheres with him and not in the bunker. Diggle mentioned they didn’t have any tranquilizer ammo. Does that mean all those rounds the team shot throughout this season were non-lethal? That’s a bummer if that’s the case. 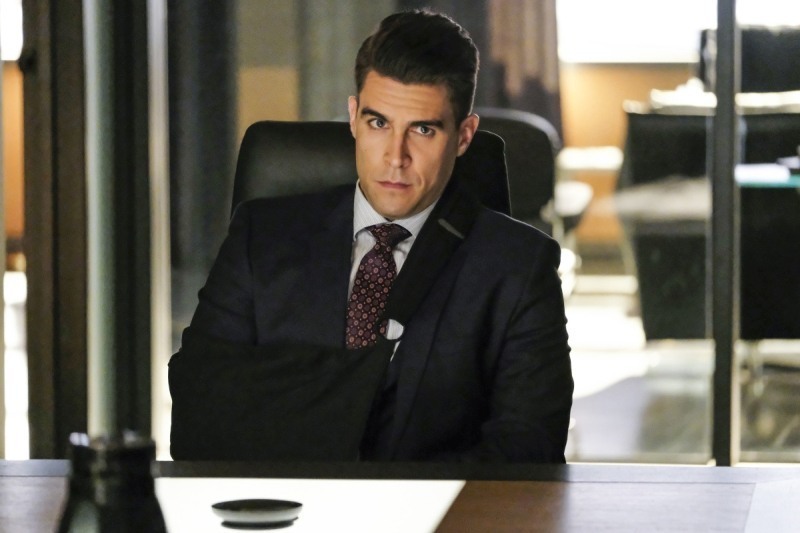 So since Felicity and Curtis were able to remove the pixelation on Chase’s face in the still image they captured, showing it’s him dressed as Prometheus, they were able to notify the feds who had him in protective custody. Now even though he eventually murdered his way out of the situation, it was satisfying to see the tables turned on the villain who has been ten steps ahead of the team all season long. Especially after he went to City Hall all smug faced to taunt Oliver some more. Now even though he has been outed as Prometheus, he doesn’t seem all that concerned or nervous about it, as he’s seen driving away singing “A Beautiful Morning”. This is probably yet another scenario he prepared for. We already know he has allies, so it’s only a matter of time before he has a team to back him up with whatever devious plans he has.

The action in this week’s episode was spectacular, with Team Arrow battling the Bratva on a few occasions. The pacing and tone shifted into a thrilling experience in comparison to last week’s dark, revealing episode. As always, it’s a blast to see the team work together, and anytime Felicity gets to have a side of adventure, it’s always a welcome change from her sitting behind a bunch of monitors.

“Disbanded” was just another bad ass episode in a later season that just won’t quit. All the stuff with Diggle and Oliver was fantastic. Even though it’ll be nice to take a break from writing reviews for this show for a bit, man, I can’t wait to see where the story goes from here, and what Prometheus has up his tricky sleeves. Arrow is on fire!!!