Warning: Full SPOILERS will be in this review. I mean, that’s kind of the point, right?

Arrow is back in full effect for its fifth season. I personally think the premiere episode brought out enough action and excitement to satisfy its fans after the long summer break. Possibly even enough to make some of us forget about how weak the fourth season finale was. However, it’s because of that finale and a number of reasons why even the most avid fan of Arrow needs to keep their expectations in check. Even though I hate to admit it, the previous two seasons of this show have shown me that things can always start out strong, but a lot of weak developments can happen in between, or even at the end. And now, we’re on the fifth season, wow! This can either be Arrow’s finest season or its worse. I certainly hope for the best. If this premiere episode was any indication, this season can be a lot of fun, but it’s going to feel very different with a new Team Arrow in the works.

When Oliver was elected mayor of Star City last season, I got pretty worried. I obviously wondered how he would balance out being a vigilante while still being able to appear in public as the city’s leader. It’s nice to know he’s not doing a great job. Because if he was able to fight a bunch of bad guys and then make it to a public function on time, that would just be stupid. So it’s great to see him struggle with that, but at the same time, interesting to see him not really care about his mayoral duties. He’s only acting as mayor for vital information on criminals. It also adds to the conflict of his character, because now he has to go through more extreme lengths to protect his secret identity, which brings killing back into the equation. 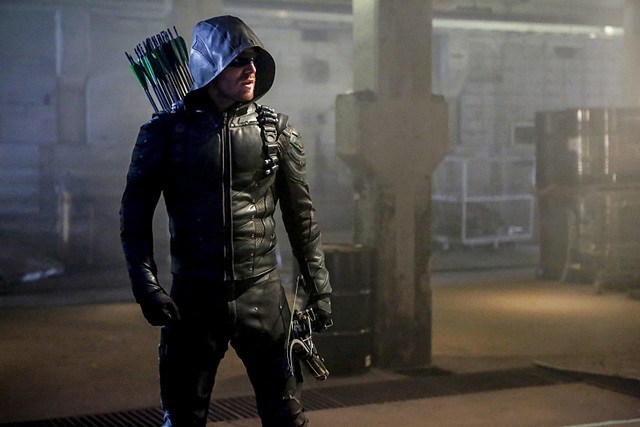 I gotta ask, am I the only one who prefers the Arrow be a killer? Maybe it’s the Punisher fan in me, but it seems to get the job done for when dealing with really bad guys. I find the discussion on whether it’s right, wrong, necessary or not, so captivating in this episode. Thea is so upset that her brother is killing again, and even though I disagree with her stance on the matter, I can understand where her head is at after all she’s been through. So now I actually respect her decision to stop being a vigilante. Which is kind of ironic since I hated her discussion to quit in last season’s finale. Still, it was cool to see her don the Speedy outfit for that rescue mission with her saving her bro after he was taken hostage by this season’s new villain. Even though she’s probably officially done crime fighting, it’s nice that she’s still a part of Ollie’s life, helping him with his “political career”. But I think she’ll be kicking ass again. That, or she’ll die. Sh*t, I shouldn’t have said that.

Quentin Lance’s drunken downward spiral is no big surprise. To be honest, it’s actually warranted given how so much has been taken from him. Let’s recap: He lost his job, his daughter was killed, and in today’s episode, we learned Donna broke up with him. Drink it up, Lance. Thankfully, it seems he’s still going to help Oliver with his crusade. This is an interesting notion, being that it gives him a purpose. He also doesn’t have to necessarily act in accordance with the law. It was a nice change of pace to see Lance and Thea have a conversation with each other about how he needs to help fight crime still, as she needs to stop. I don’t think we’ve ever seen those two characters interact with each other like that. Willa Holland and Paul Blackthrone really pulled it off.

Since the title of this episode is “Legacy”, it deals with that very theme, and the Black Canary is at the center of that. The feels should have been strong with this episode, but they really weren’t. The Laurel Lance flashback with her on her death bed was really unnecessary, even though I always enjoy seeing Katie Cassidy. It also felt very off because when did she and Oliver have the conversation that the Black Canary needs to always have a presence in Team Arrow? I thought we pretty much spent every final moment of her life with her while she was conscious in the hospital. Anyway, yes, we will see a new Black Canary, but it didn’t need to be Laurel’s dying wish. 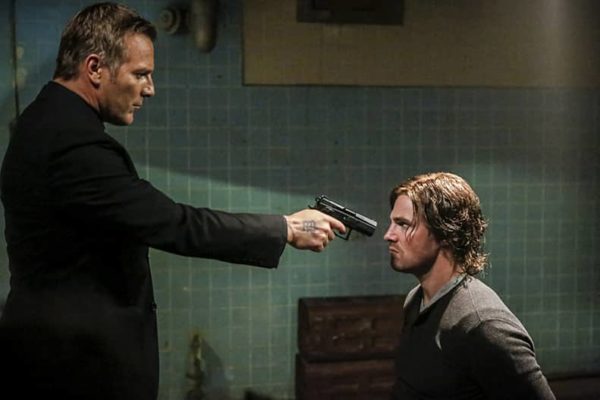 Okay, the flashbacks. Us fans pretty much begged for them to stop, but alas, they are continuing. Fortunately, the Russian mob element helps assure me that these flashbacks may turn out good. There was certainly plenty of violence in this episode’s flashback. Plus, the plot seems simple and clear enough. Olie is fulfilling his promise to Taiana by seeking out a gangster so he can kill him. You know what? Let’s keep it simple, make it violent, keep boring statues and magic out of the equation, and I think we can have a good time with these flashback. Especially considering who the villain will be. Not going to say who because some of y’all probably don’t read ahead of each episode or watch clips. Oh, yeah, by the way, am I the only one that thinks the timeline is screwed up? The caption on the flashback read “Five Years Earlier”. Oliver Queen was thought to have been stranded on the island for five years. Um, exactly how much time was spent between Oliver’s first time on Lain Yu, then Hong Kong, then back on Lain Yu with a haircut, now in Russia with his hair all dopey again? Is Barry Allen responsible for the timeline being messed up? Dammit, Barry. 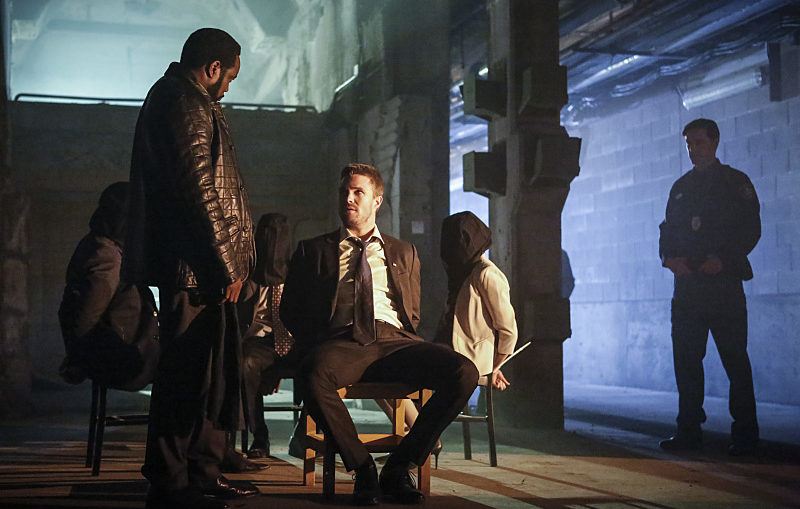 Tobias Church, a new, savvy villain was introduced. He is played by Walking Dead alum Chad L. Coleman, whom I had no idea was cast in this season, so it was an awesome surprise for me. Speaking of surprises, we may be in store for some, because apparently, this character does not exist in the DC Comics. This is great because we’ll all learn about this guy as the season goes on. Is he more than he appears to be? Could he be a metahuman? What is his deal? One thing is for certain, he is dangerous and violent. You see him pull out the brass knuckles, you’re f**ked. Oh, and did I detect a Walking Dead nod involving a baseball bat? Anyway, I bet he and the Green Arrow have some vicious brawls ahead of them. I think this guy is going to be a lot of trouble for Team Arrow, but I do doubt he’ll match the brilliance of Damien Darhk.

Felicity seemed chipper throughout the episode. Guess seeing her with a new man by the end of the episode has SOMETHING TO DO WITH IT, DAMMIT!… Sorry… Look, I’ll admit it, I’m a Olicity shipper, but even I’m okay with Ollie and Felicity taking a break and focusing on rebuilding Team Arrow. So who the hell is this douche?! Then there’s Curtis, now a series regular. Apparently he wants to be recruited as a crime fighter. Not sure how I feel about that yet. Hopefully some of Ollie’s training makes him tougher and less annoying. Yeah, I said it. I find him annoying.

Now let’s talk about the good stuff… the action! Oh, hell yeah, the action rocked in this premiere episode. The very first fight scene between Arrow and Lonnie was outstanding. The stunt work and choreography was fierce. The camera work was perfect. All of the action sequences were great. This is stunt coordinator James Bamford third time directing a Arrow episode. He is credited for two upcoming episodes, but sign him on for more, dammit. Wow, is all I can keep saying. I will watch this episode in its entirety again because of these action sequences. The episode looked great overall.

The tone in this episode was a decent mixture of dark and hopeful. It’s interesting to see Oliver in denial that his old team is gone. Thea can’t be Speedy anymore and Diggle is still off overseas in the military. I want Diggle back stateside just as much as Ollie. Everyone is telling Ollie that he needs a new team, and it isn’t until the end he realizes a new team is the only way to go. Not going to lie, I’m nervous on how this will turn out. I, like Oliver, have become dependent on the show’s familiar characters. I’ll keep my mind open though.

The premiere episode was a lot of fun to watch, even with its flaws and some of the revelations it presented. Not going to lie, the show is starting to show its age a bit. The challenges presented to our characters are new to them but not new to us TV watchers. There are some interesting elements that were setup for this season. I just really hope they can capitalize on them. Regardless, The CW and DC never fail to entertain, and Arrow is a great source for pure ass kicking entertainment. So whatever issues this season may have, I’m sure my love for the show will stay intact. 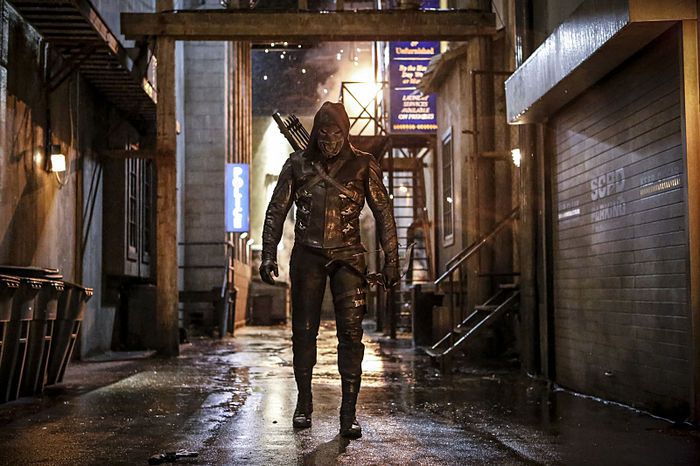 Oh, yeah, and there’s a vicious, murderous Arrow imposter too. That should add a lot of problems to Ollie’s already full plate. 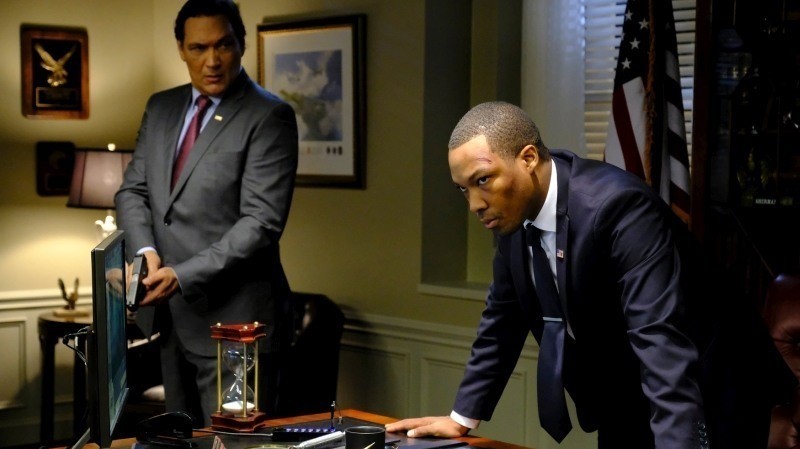 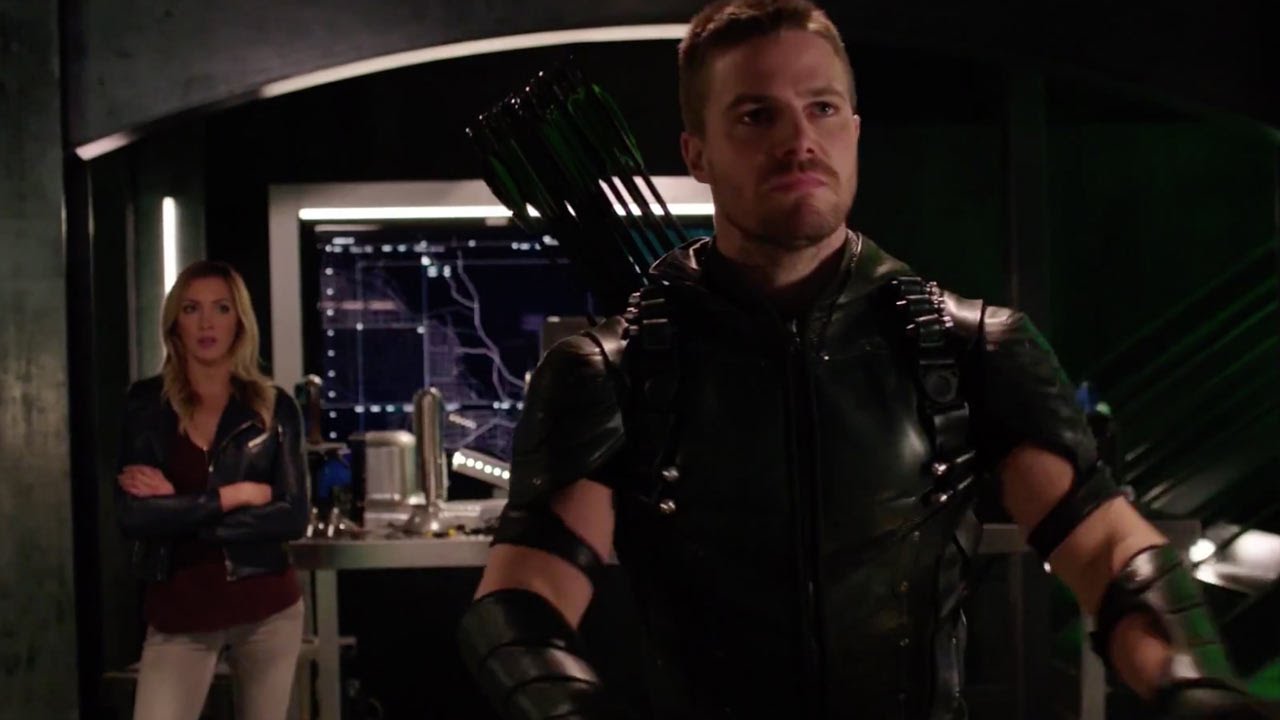 Arrow: "Legacy" Season Five Premiere Review Sharks need to just keep swimming. Warning: Full SPOILERS will be in this review. I mean, that's kind of the point, right? Arrow is back in full effect for its fifth season. I persona...
0
Average User Rating
0 votes
Please sign in to rate.