Why can’t the al Ghul’s just hug it out?

Warning: SPOILERS are about to ensue, obviously.

What up, people, it’s me, Big Gabe. I’ll be taking over the weekly reviews for Arrow. Don’t worry, Kevin Morrison is fine, and still doing plenty of other TV reviews. I was asked to help review this show, and that’s what I’ma gonna do. Just going to give you a quick background, so you know where I’m coming from. I love this show. I am not very critical towards it like other fans have grown to be. I know it’s flawed, and as the show ages, characters and situations get a tad “meh”, but I really don’t care. It’s my escape from reality. This season, to me, hasn’t been particularly memorable, but it’s still damn entertaining.

Alright, so since we’re missing a review for last week’s “Unchained” episode, let’s do a quick recap… 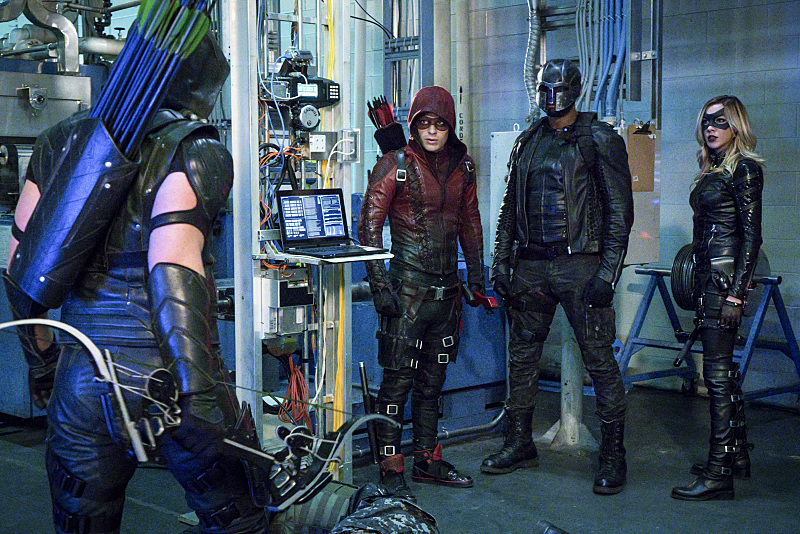 Roy Harper was back. Remember Roy? Handsome son of a… He mind was under the control of a new foe, a skilled hacker named The Calculator. Roy’s job was to steal materials needed for The Calculator’s plans to shut down the city. While Oliver and Thea pursued Roy, at the time not knowing it was him, Thea went unconscious and later slipped into a coma. It was revealed the bloodlust was killing her at a rapid state. Once Oliver and the gang tracked Roy down, they broke him free of his mind control. He donned the red suit and helped them track The Calculator. Felicity, while preparing to show the board at Palmer Tech her new prototype power cell, matched wits with The Calculator in efforts to foil his plan. Later, the team tracked down the villain’s bomb and ended his reign of cyber-terrorism. The Calculator later met up with Felicity at Palmer Tech revealing he was her father. Nyssa al Ghul escaped captivity with plans to take revenge against Malcolm Merlyn. She offered a cure for Thea if Oliver agreed to kill Malcolm. In the flashback department, Reiter tortured Oliver to give out information on the maps he found. Oliver began seeing hallucinations of Shado, his deceased lover. He also admitted to Taiana that he killed her brother.

So boom, recap done. Solid episode. Fine action, great setup, good to see Roy again, Felicity vs The Calculator was great. Lots of good stuff. I’d give it an A-

Now onto “Sins of the Father”.

The main plot dealt with Oliver and his team desperately trying to prevent a civil war within the League of Assassins. Thea remains in a coma, but Nyssa has a potion that can cure her. However, she’ll only give it to Oliver if he kills Malcolm. Oliver thinks of an alternative. He figures if he can convince Malcolm to give up the Demon’s Head ring and hand over the throne of Ra’s al Ghul to Nyssa for the sake of Thea, his daughter, the war can be prevented and the cure will be handed over. Laurel tries to talk Nyssa down and agree to these terms. At some point, she also tells Nyssa her villainous actions are that of her late father. 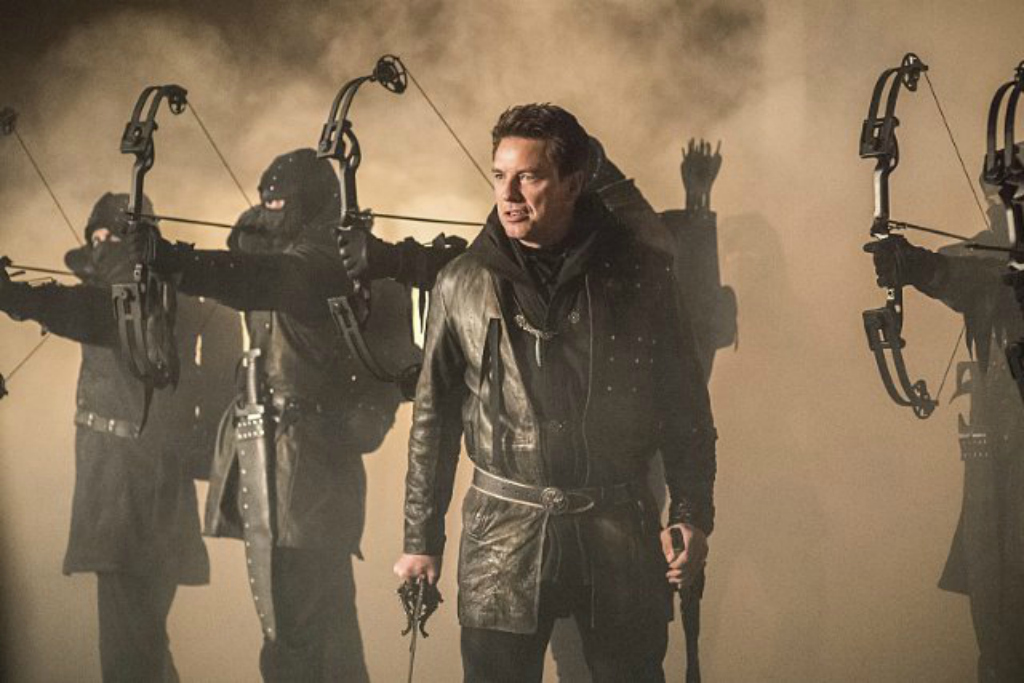 Meanwhile, The Calculator aka Noah Kuttler, Felicity’s estranged father, tries to open up to his daughter and possibly form an alliance. She obviously hesitates but wants to believe he has changed. Later, it’s revealed he may have wanted to reconnect with Felicity, but his main goal was to get information from Palmer Tech. He is later arrested. Very predictable subplot, but it allowed Emily Bett Rickards to show off more of her dramatic acting talents.

In the flashback, which in my opinion, has been the least interesting aspects of this season, Oliver tries to make Taiana understand he only killed her brother out of self defense. She, not believing him, offers the rock Oliver had containing parts of the map Reiter wants. Lady, your brother was an asshole and you’re on an island where it’s kill or be killed Did you really expect Oliver to just lay down and die by your brother’s hands? Stop being annoying.

So going back to the League situation… Malcolm betrays Oliver’s trust by not only refusing to give up the ring, but also attempting to kill Nyssa… I mean, you know… we all kinda saw that coming, Oliver. Did you REALLY think it would be that easy? Anyway, after things slightly cool down, Oliver arranges a duel to take place between Nyssa and Malcolm, with the victor assuming the role of Ra’s al Ghul. Oliver, still being Nyssa’s husband in the eyes of the League, takes her place in the duel. In what should have been a cool and exciting fight between Merlyn and Queen, it ends up being abrupt with Oliver spearing Malcolm’s life but chopping off his hand in the process, allowing Oliver to give Nyssa the ring. 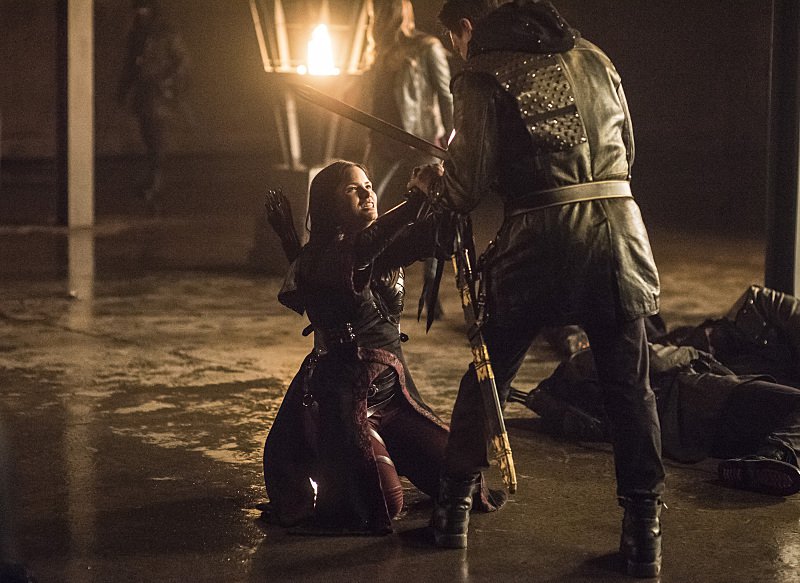 Nyssa eventually gives up the potion, and Thea is cured. She meets with Oliver and Malcolm to tell them she has disbanded the League and she destroys the Demon’s Head ring causing Malcolm to get very, very mad at Oliver. Later, Malcolm meets with Damien Darhk. He tells Darhk the key to destroying Oliver is to get to his son.

This was a pretty good episode. I enjoyed the main plot, especially since it heavily involved Nyssa. I like her character, and um, Katrina Law is always easy on the eyes. The subplot with Felicity and her dad was okay, but it really stalled the momentum of the episode. The flashback, I could care less about, but I just found the Taiana character to be annoying. I really like some of the dramatic exchanges between Oliver and Malcolm, who showed some rather convincing anger. There was also a very cool battle between Nyssa’s League members and Malcolm’s that reached the streets, causing civilians to get caught in the crossfire. Pretty predictable outcomes unfortunately, but I did like the themes of redemption that were explored. Another good episode that gets me excited for the next one.

Arrow – “Sins of the Father” Review, Plus “Unchained” Recap

Why can't the al Ghul's just hug it out? Warning: SPOILERS are about to ensue, obviously. What up, people, it's me, Big Gabe. I'll be taking over the weekly reviews for Arrow. Don't worry, Kevin Morrison is fine, and still doing p...
0
Average User Rating
0 votes
Please sign in to rate.