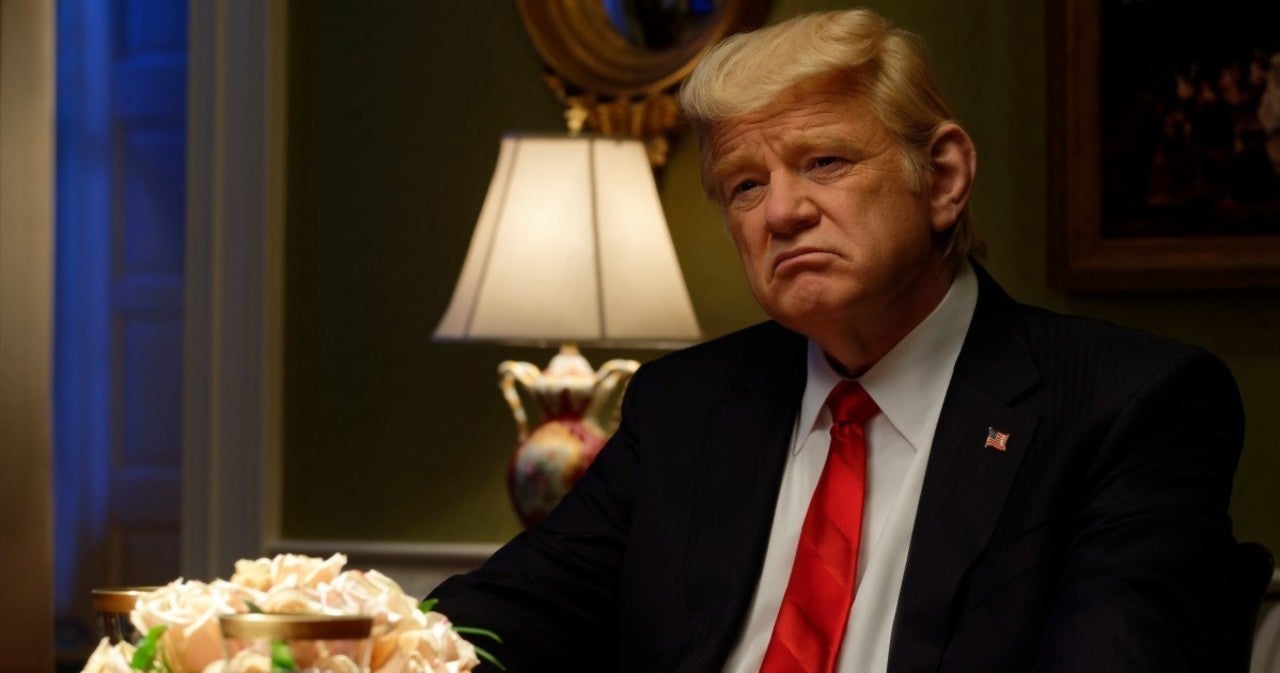 That would make a pretty good series, right? Unfortunately, it’s not a made-up story and is based on actual events as described in former FBI director James Comey’s book, “A Higher Loyalty.” The two-episode mini-series entitled The Comey Rule and will air over two-nights, September 27th and September 28th, on Showtime. Written and directed by Billy Ray (Richard Jewell), the series features an all-star group of actors, all perfectly cast in their roles. The mini-series really focuses on three main characters, James Comey, who is brilliantly played by Jeff Daniels, Rod Rosenstein, who narrates the series and is portrayed by Scoot McNairy, and President Donald Trump played precisely and menacingly by Brendan Gleeson. Other well-known figures from the Hillary Clinton investigation, the Russia investigation, and the current administration are also portrayed wonderfully by the cast including Michael Kelly as Andrew McCabe, Holly Hunter as Sally Yates, Brian D’Arcy as Mark Giuliano, T.R. Knight as Reince Priebus, Jonathan Banks as James Clapper, Joe Lo Truglio as Jeff Sessions, William Sadler as Michael Flynn, Peter Coyote as Robert Mueller, and Kingsley Ben-Adir as President Barack Obama. 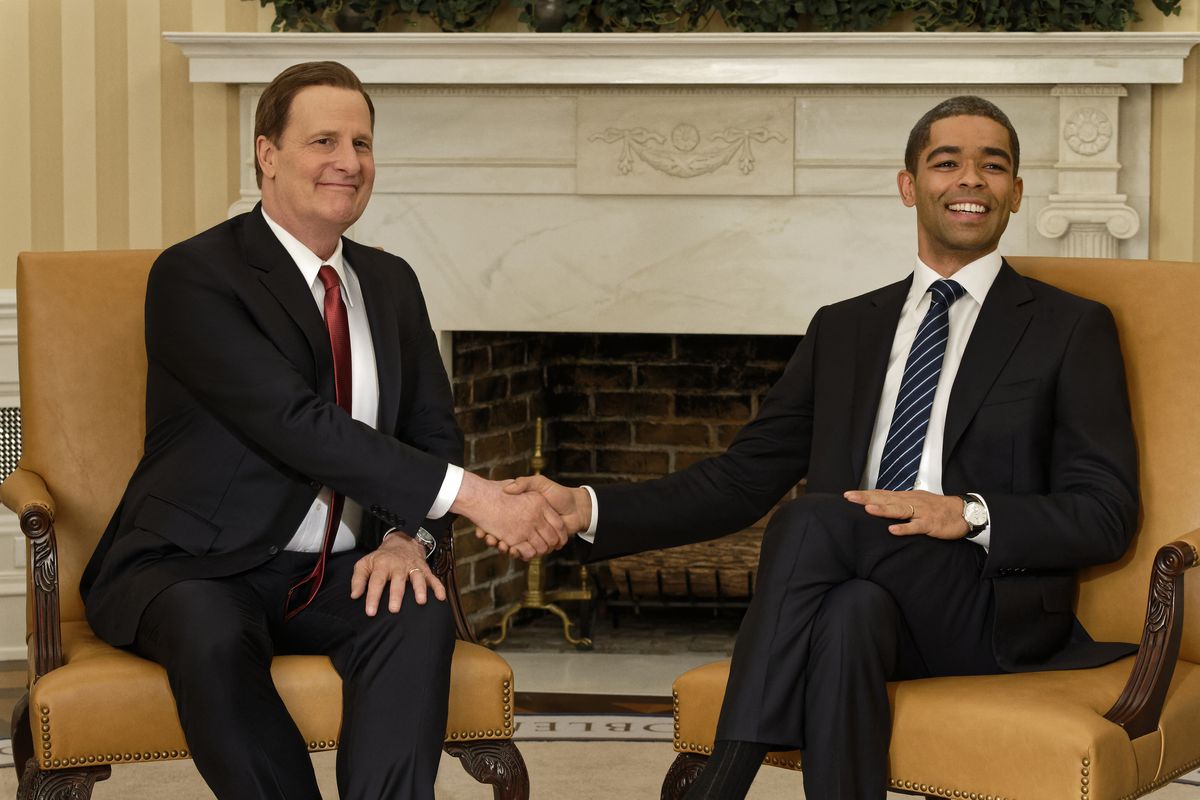 While I really enjoyed the series and thought it was well executed overall, assuming that everything Comey wrote in his book is true, I found the show to be more frightening than any episode of The Walking Dead, just because of what it implies for the current state of our country. That being said, you do have to take the series with a grain of salt, as the story is being told from Comey’s point of view, and you have to wonder how he would have known what happened in rooms that he was not in. For instance, the series is bookended with Rod Rosenstein explaining his personal history with Comey to an assistant. Unless Rosenstein told Comey that this happened, and since Rosenstein actually fired Comey … I doubt it, how did Comey know? It’s easy to say this is a dramatic choice by the filmmakers, and it works well as a storytelling device, but with a true story as polarizing and important as this, you know some audience members are not going to believe all the details, and why put anymore doubt in their minds than necessary? There is one other storytelling device that the showrunners utilized that I found distracting, which was there use of real-life footage. Several political figures that were not played by actors, including Hillary Clinton, Sean Spicer, and Sarah Sanders, appear in news footage, but so does William Sadler as Michael Flynn, which is inconsistent and can be confusing.

But you cannot deny the powerful drama of The Comey Rule and its reflection of our country’s recent history. The series is a truly entertaining and compelling thriller with fantastic performances from its supporting cast including Brian d’Arcy, Jonathan Banks, William Sadler, Joe Lo Truglio, and Peter Coyote. Holly Hunter is as excellent as always as Sally Yates, but the role is somewhat limited in the series, and I wish the actress had more to do. Jennifer Ehle plays Comey’s wife, Patrice, and has warm chemistry with Daniels. Michael Kelly is outstanding as Andrew McCabe and is an absolute ringer for his real-life counterpart. Kelly is one of those actors that can fit into any role of authority quite easily, and he is effortlessly believable as the famous FBI agent. Scoot McNairy carries a lot of the weight of the series as its narrator, Rod Rosenstein, and illuminates the character’s envy for Comey and unease towards Trump quite well. In some ways, Rosenstein’s story is that of “making a deal with the devil,” and McNairy allows that idea to wash over the character in one pivotal sequence. 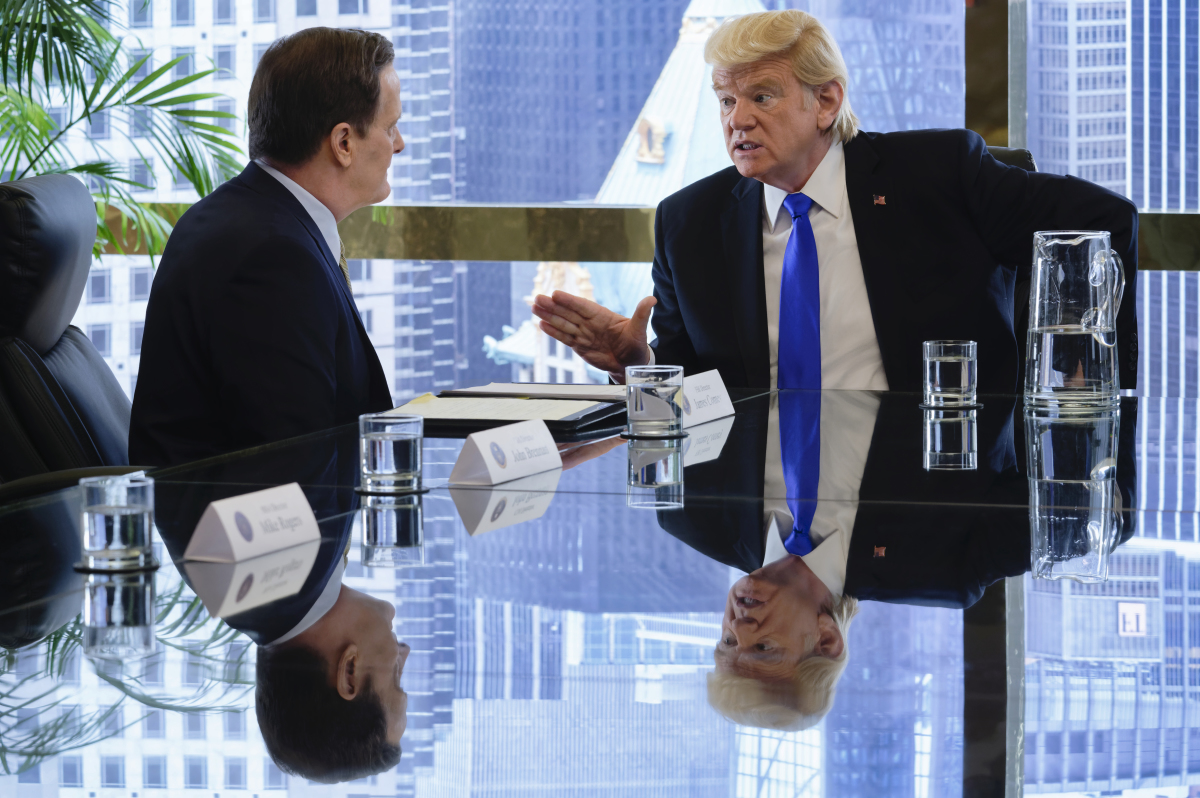 While Brendan Gleeson barely appears in the first episode, his shadow looms large over the entire series, and the first image of the actor as Donald Trump in the final seconds of the premiere is very powerful. The actor wisely chose not to do a cartoonish impression of Trump-like Alec Baldwin does on SNL, but instead captures the President’s heavy breathing and odd speech patterns perfectly. At times the performance can seem over the top, but knowing that it is based on reality, it just makes it that more menacing. But it’s Jeff Daniels’ performance as James Comey that really grounds the series and ties it all together. I can’t think of an actor with more respect and gravitas than Jeff Daniels, and that shines through his performance as we follow his character through the events of the series. Daniels’ performance is stoic, yet you can feel the character’s inner pain as he is asked repeatedly to compromise his own morals and integrity. It is truly a commanding performance and one that Daniels deserves to be rewarded for.

In the end, The Comey Rule is probably as polarizing as James Comey is himself. Depending on what end of the political spectrum you fall, your either going to come away from watching this series thinking James Comey is an egomaniac that threw the election for Donald Trump, or you will have sympathy for an American patriot that was put in an impossible situation that unwillingly led to a Russian agent becoming President. Either way, the series will probably not change your preconceived notions about the outcome of the 2016 election, but on the eve of the 2020 election, hopefully, it will give you pause and shed light on facts that you were not aware of.

‘The Comey Rule’ Review: As polarizing as James Comey is himself