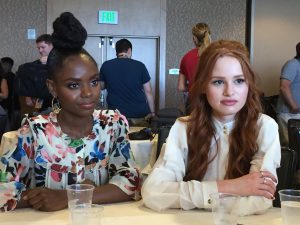 Ashleigh Murray and Madelaine Petsch were big discoveries on Riverdale. Murray plays Josie, a sassy modern take on the musical lead singer of The Pussycats. Petsch was a magnificent bitch as Cheryl Blossom, the queen bee of Riverdale High and sister of the murdered Jason Blossom.

Both Petsch and Murray were equally magnificent in person at Comic-Con. We joined a roundtable interview with Murray and Petsch at Comic-Con to hear about season two.

Q: What did you reveal in the panel? 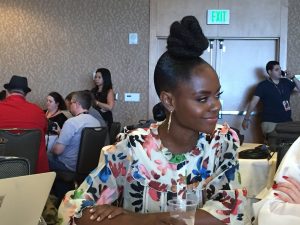 Q: The music has been one of the lighter things on the show. Will Josie and the Pussycats still be performing?

Q: What does it mean to be brazen?

Ashleigh Murray: I feel like being brazen means to me just unapologetically you. There’s no reason to apologize for how you feel, where you stand. It’s no different from anyone else’s opinions, especially if they’re not a woman. I think just being unequivocally yourself is what brazen is to me. 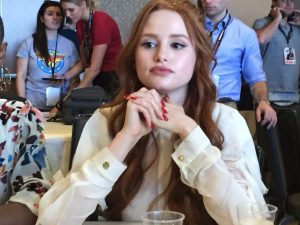 Madelaine Petsch: Hit the nail on the head. I’ll take that answer too. Ditto.

Q: Do the Blossoms have a chance to go through grief over the loss of Jason?

Madelaine Petsch: I got closure on Jason. Cheryl is moving on. Good lord.

Madelaine Petsch: Yeah, I don’t think she’s grieving about that one too hard. Cheryl took a choice to kind of be reborn from the ashes. She is no longer interested in being treated the way she’s treated by her parents. She was a doorknob for so long in her family and she’s not doing it anymore. She’s taking the reigns back. She’s definitely putting her mother in her place and she will be in charge this season of the Blossom family, what’s left of it. 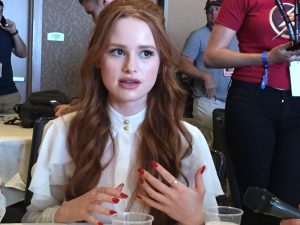 Q: Is she also taking more control at school?

Madelaine Petsch: Not necessarily more control. I think it’s that she is more unapologetic and she’s even meaner this season because she tried. Can you believe it? Her walls are up even further. She put her defense mechanisms down last season and it didn’t work well for her so she’s getting colder, she’s getting meaner.

Q: How does it feel to work in a cast with so many other women?

Madelaine Petsch: I feel like there’s always one bad seed, is what I hear. We haven one. We have no bad seeds. We have all amazing seeds.

Ashleigh Murray: It doesn’t even feel like going to work, you know what I mean? We miss it and show up just like, “Hey, what did you have for dinner last night?” We’re just all hanging out. We want everybody else to have really cool projects. We just want everybody else to succeed. We love each other so much that there’s no competitive nature whatsoever. It’s really, really wonderful and it’s so rare so I’m trying not to get used to it.