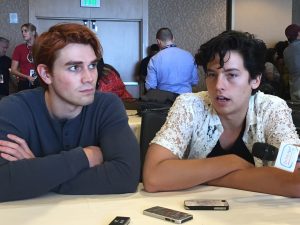 The CW series Riverdale reinvented Archie Comics as a dark mystery. Season one left Archie and Jughead in a dark place, with Archie’s father (Luke Perry) getting shot, and Jughead (Cole Sprouse) going to a different school. The boys were back together again at Comic-Con, and we sat in on roundtables with the Riverdale cast to hear about season two.

Franchise Fred: How does Archie and Jughead’s bromance continue in season two?

Cole Sprouse: In the show, it gets tense again.

KJ Apa: There’s not really much of us being actual friends ever.

Cole Sprouse: Jughead is based in a part of town, as we know at the end of season one, that is undoubtedly wrapped up in a world of crime. Archie’s a character of strong morality and that is going to affect the relationships.

Q: What will Jughead need from his old friend as he continues down this path?

Cole Sprouse: Understanding. Archie, Veronica and Betty, unlike Jughead, truly all come from extreme privilege and continue to have a lot of privilege. Betty arguably has the most privilege. I think they all have different areas of struggle and I think for them to understand Jughead’s life is going the way it’s going would be the greatest gift from a friend. 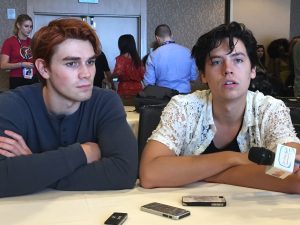 Q: What were the most difficult emotionally tense scenes in season one?

KJ Apa: That first episode for Archie, obviously he’s still dealing dealing with Fred being being shot. So every single scene that we shot for that for me especially was challenging. I was anxious before I was shooting that episode. When I read it first, I thought this is going to be really hard for me, really challenging but I think when you feel that way about something and you feel nervous and anxious on set, that means what you’re doing is good.

Cole Sprouse: Season two, it’s like the writers looked at Jughead and were like, “Make him unhappy. Give him a treat. Now pull him back again.” Season one left him in an extremely vulnerable position. It’s like gang recruitment 101. You find a kid who’s looking for a family structure and you’re like, “We can be your family.” Then season two is like the exact same emotional narrative is taking off right where he was left in season one, just as vulnerable. Season two is, acting-wise, for Archie as well and all of us, acting-wise is asking for a lot more of the chops that we showed in season one which is good.

Q: Will Jughead be going to a darker place?

Cole Sprouse: Yeah, dark seems to be the buzzword that we’re all using for season two. It can be used as an umbrella term. I think Jughead makes understandable connections.

Q: Their relationships were getting pretty serious in the finale. What will happen with those romances?

KJ Apa: Archie and Veronica are obviously still dating in season two, but with Archie dealing with his father being shot, there’s so much going on. I think also that kind of sparks this drive in Archie in season two where he’s determined, he’s finding out Riverdale is changing. There’s a civil war almost between the south side and the north side of Riverdale. Eventually everyone ends up picking a side but I think Archie is deep in that whole feud. That causes a lot of conflict and messes with your relationship a lot.

Franchise Fred: Did you get any break from the hair over the summer

KJ Apa: Yeah, I dyed it straight back to my normal color as soon as we wrapped up season one.