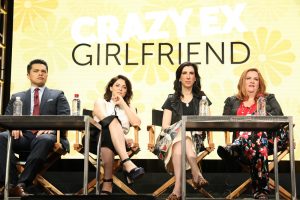 The cast and creators of Crazy Ex-Girlfriend were on a panel for the Television Critics Association today, previewing their third season. Big announcements include music video and feature film director Joseph Kahn will direct the season’s new theme song, and episode four.

“I think it’s a song we talked about the most,” said show runner Aline Brosh McKenna. “We did a lot of R&D for it. They’re not just sketch-y songs. They’re conceptual videos.” 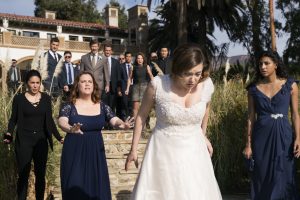 Season three will follow up on Rebecca (Rachel Bloom) declaring revenge on Josh (Vincent Rodriguez III) for standing her up at the altar.

“If you thought this show was going to be funny Fatal Attraction, that’s what we are going into this season as,” Bloom said. “I mean, Rebecca thinks that she is a woman scorned.”

But Rebecca can only go full Glenn Close in her own Crazy Ex-Girlfriend way. “If Rebecca tried to boil a bunny, she would take the bunny and be, like, ‘Oh, it’s so cute,’ and bring it home, and then, a month later, she would have 50 bunnies,” Brosh McKenna said. “So she’s not very good at trying to be the femme fatale that she would like to be.” 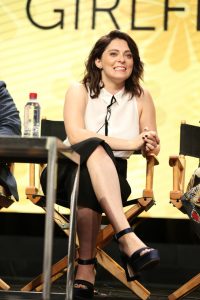 This sounds even more intense than “Heavy Boobs.” “The writers’ room was saying we were shocked it only took 35 episodes to get Rachel to fling her boobs around, but we got there,” McKenna added. “We got there, guys. So that’s happening this season.”
The writers room got ahead on the stories this season so that the songwriters could spend more time on the music. This resulted in a diverse selection of music genres.

“Everybody on this panel has songs in different genres,” Brosh McKenna said. “In the first episode, there is a song that is the ladies. I’m saying it’s a genre that I particularly love.”

Expect to see more songs including the entire cast as the story moves forward. “What’s exciting too about this season is there is a lot more ensemble based songs, because the story lines are starting to intertwine and fold into ways that haven’t been done before,” said Gabrielle Ruiz. “So we’re able to harmonize and back each other up and take some solo spots which also are different kinds of genres of music. So that’s definitely opened up the season, I’d say, already, and we just got started.”

Where does all of this leave Josh Chan? Is he going to stick with the priesthood? “Oh, she’s out for revenge,” Rodriguez said. “It’s also that Josh is going to hit a crossroads. How long does he really stick with anything? I mean, I think that’s the question. Also where does Josh see himself in his future? I feel like that’s a struggle, his place in the world. So I think that’s something he’s going to have to face head-on. And what’s weird is that Rebecca is going to actually help facilitate that, given her revenge seeking bullet for me.”

Paula (Donna Lynn Champlin) came into her own last season as she went back to law school. Season three will also spend a healthy amount of time focusing on her.

“This year, we’re also exploring more of her original family,” Champlin said. “We see her parents, and we go back to Buffalo. You get more information about who Paula is and who Rebecca is, which just fills in the colors more, as to why we all do what we do.”