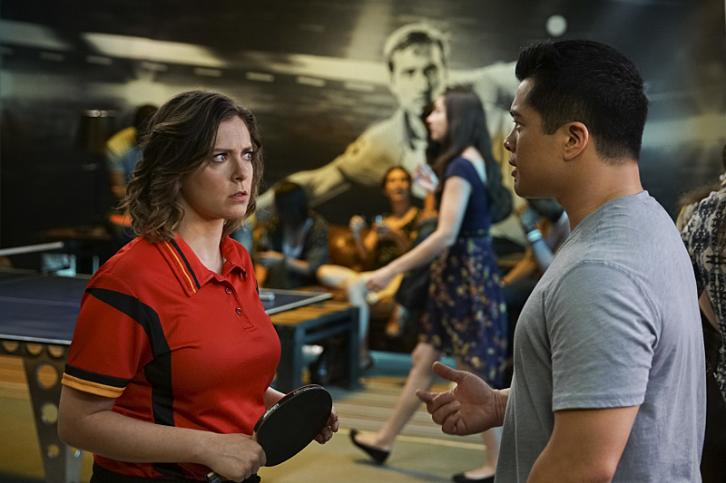 Crazy Ex-Girlfriend Season 2 Episode 2 Review: When Will Josh See How Cool I Am?

The Crazy Ex-Girlfriend season 2 opener failed to wow me which as a die-hard fan left me sad and concerned. You can read my thoughts on last week’s episode, “Where is Josh’s Friend” right here.

However, just one short week later, I am delighted to report that this week’s episode titled “When Will Josh See How Cool I Am?” proves the show is back and in top form.

Episode 2 opens with Greg sharing his story among his group in Alcoholics Anonymous. This is a continuation of the storyline from last week’s episode where Rebecca learns that Greg was forced to join AA after getting a DUI while driving back from Josh’s sister’s wedding at the end of the first season. During this opening scene, we are also introduced to Greg’s AA mentor Guardrail (Jayden Lund), who is this tough biker guy with a love of donuts.

The episode switches gears to show Josh returning to Rebecca’s place after a karate class. While Rebecca tries to plan their next date, Josh keeps mentioning his plans for the rest of the week. After learning that Josh’s schedule is filled up with spending time with his friends, Rebecca lies and tells Josh that she is a pro at ping-pong so she can join him and his buddies at one of their outings.

Back at the law office, Paula announces that she is going to law school. Paula asks Rebecca to write her a letter of recommendation for her application because they are besties. Rebecca promises that she will have the letter ready by Friday. Darryl tries to let Paula know that he has already written her a recommendation letter but Paula refuses to accept it because she wants the one Rebecca is writing her. Instead of writing the letter right away, Rebecca becomes occupied with learning how to play ping pong and hires Xiao (Albert Tsai) to teach her. 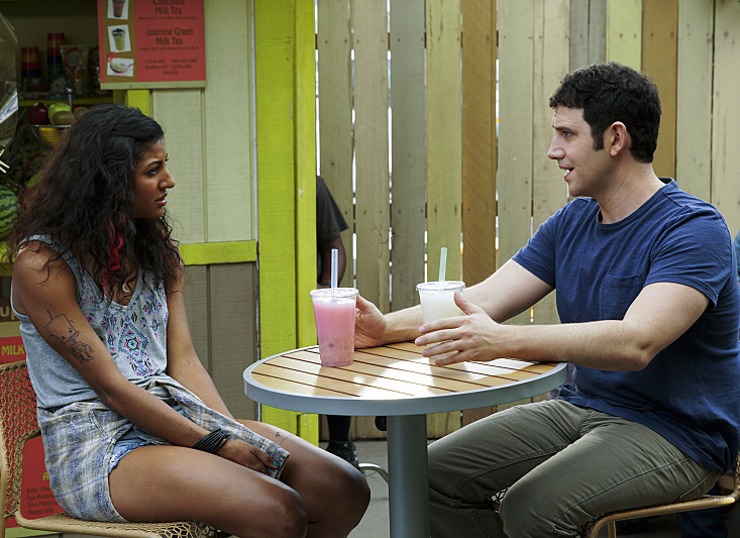 Meanwhile, Greg returns to his job at the bar after being gone for over a month. Everyone seems very supportive about his alcohol addiction including his boss. After seeing how well his co-workers took the news, Greg decides to get all his friends together (Josh, White Josh, and Hector) so he can tell them about his problem. While White Josh and Hector seem to be rather understanding, Josh tries to take responsibility for Greg’s addiction and feels extremely guilty for sleeping with Rebecca knowing that Greg has feelings for her.

Josh turns to Father Brah (Rene Gube) for guidance. He tells Josh that it would be selfish of him to bring up his relationship with Rebecca while Greg is still coming to grips with his addiction. Unfortunately, while talking to Father Brah, Josh sees Greg and Heather (Vella Lovell) talking. Greg is trying to apologize to Heather for being such an asshole while they were dating but gets interrupted by Josh. This leads to Greg asking Josh about what he has been up to but unlike Rebecca, Josh isn’t as quick on his feet about lying. He nervously begins to make up a story about him staying at a celebrity’s place that he rented on Airbnb.

As Heather and Greg continue to talk to Josh, they begin to question his story. It doesn’t take long before Josh blurts out that he and Rebecca have been sleeping together since the night of his sister’s wedding. Josh begins to apologize about his actions but Greg pretends to ignore what Josh has just told him. Greg tells Josh that what happened in the past is in the past and that he just wants to put the whole “Rebecca” thing behind him. He gives Josh a bro-hug and Josh leaves the conversation feeling relieved as though a huge weight has been lifted off his chest.  Heather, however, calls Greg out for hiding his feelings about Rebecca. She tries to convey to Greg that it is ok to have feelings but the conversation only makes Greg upset and leads him to punch a hole in the wall.

Rebecca and Xiao show up at Josh’s guy’s night at the ping-pong place. Everyone looks at Rebecca because she isn’t playing like the ping-pong master she told Josh she was earlier in the week. During this scene, Josh begins to worry about Greg and questions why he hasn’t arrived yet. Hector and White Josh suggest they should go look for him. This leads to Josh admitting to Rebecca that he told Greg about them sleeping together. This causes everyone to panic, as the gang splits up to look for Greg.

After remembering that Paula helped track Greg’s whereabouts in the past, Rebecca remembers that Greg visits a local duck pond to clear his head. She heads to the pond where she finds Greg sitting alone. The two begin to have a heart to heart and talk about their relationship leading up to this moment. This scene, in particular, was extremely genuine and heartfelt. There is a lot of insight into who Greg is as a person as well as his true feelings towards Rebecca. After having this eye-opening conversation with Greg, Rebecca remembers that she hasn’t typed up the recommendation letter for Paula and begins to questions her actions and how she treats others.

The episode ends with Rebecca returning home where she finds Josh on her couch playing video games. For the very first time, we openly see Rebecca admit to lying. She also calls Josh out for covering up the fact that he actually lives with Rebecca since he spends most of his time there. Rebecca heads upstairs where she opens the dresser drawer only to find Greg’s sweatshirt. She picks up the sweatshirt and begins to smell it and then proceeds to lay down on the bed while holding the shirt in her arms.

“When Will Josh See How Cool I Am?” was a great episode and one that begins to shed a bright light onto where this season is heading. The relationship between Paula and Rebecca has changed but in a very positive way. The fact that Josh is questioning himself and his actions is also quite refreshing. I loved that one of the underlying themes of this episode was that Josh is in fact very selfish. As an audience member, we have grown so used to Josh being the object of Rebecca’s obsession but here we are reminded he isn’t flawless and tries to shift a lot of the focus to be about him. I love that White Josh, and Hector calls him out on it during the scene where Greg is trying to tell them about his addiction.

Speaking of the addiction, I was so excited to see that most of the episode was focused on Greg and his battle with alcohol. While Crazy Ex-Girlfriend is a comedy, I have always admired how Bloom and the show’s writing team manages to tackle real issues within the fun musical numbers and comedic storylines. There are quite a few genuine moments throughout this episode. These moments are very much real life moments where a character is forced to think or talk about their actions or behavior. It is so refreshing to see a comedy tackle such serious subject matters while also managing to be incredibly lighthearted and silly.

Another great element about this episode is the music. There are three wonderful musical numbers and two of the three, could easily be two of my favorites from the series thus far. My favorite song was “Greg’s Drinking Song” which is a tongue-in-cheek parody of those Irish drinking songs. While the song is extremely funny, the lyrics jokingly imply how those who have a drinking problem behave and how the booze affects their judgement. This song is clever and performed brilliantly by Santino Fontana. 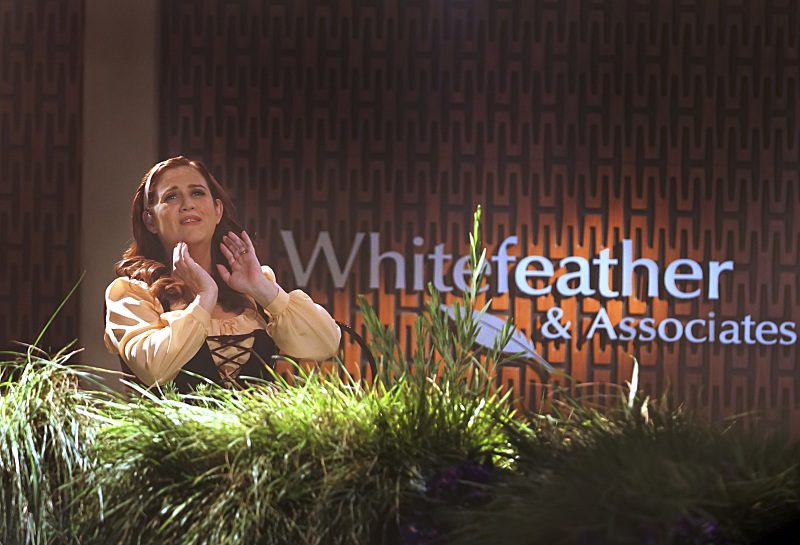 The song “My Ping-Pong Girl” is also catchy and hilarious. This song reminded me of a Sum 41 or Simple Plan song. Lastly, Paula sings, “Maybe This Dream” which tackles being a mother who has let her dreams and aspirations fall by the wayside. It should also be noted that this episode cleverly reprises small portions of songs from season one. These throwbacks, if you will, are done in such a way that it almost feels like a reward for those who are hardcore fans of the series.

“When Will Josh See How Cool I Am?” seems to be the first of several episodes that will showcase our favorite characters growing and changing as individuals. Bloom has always stated that the show isn’t about who is going to end up together but rather about the personal pursuit for happiness. This episode shines a bright light on how flawed all these characters are. There was a lot of character growth in this episode and even hints upon Rebecca finally starting to wake up and realize that she has a lot of issues within herself.

I cannot wait to see how this season continues to plays out and I will be back next week with my review of All Signs Point to Josh… Or Is It Josh’s Friend?” which airs on November 4, 2016 on the CW.