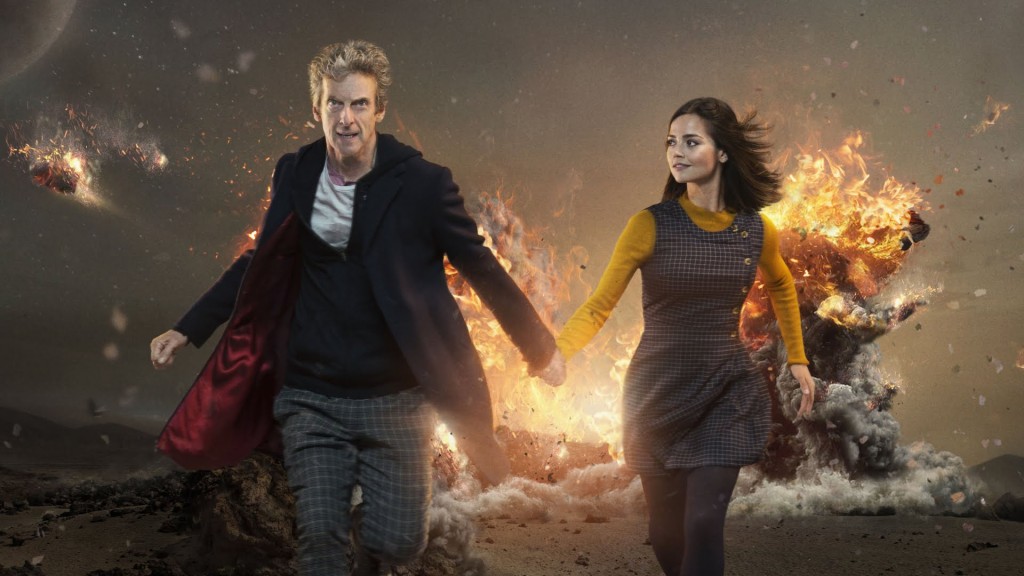 The series premiere of Doctor Who was remarkable.  Two part episodes can be difficult, especially when the first episode is incredible.  Will the second episode hold up next to the first or will it fall flat?  I was very hopeful and The Witch’s Familiar did not disappoint.

Steven Moffat is back in the saddle for this episode showing that he still knows how to captivate and surprise his audience.  When it opens we learn Clara and Missy survived because of hacked vortex manipulators.  They’re headed back into the city to try to help the Doctor.  Missy is our comic relief in the episode. Whether she’s using sarcastic, dry wit to tell a story, throwing Clara down into a sewage pit or squealing “Weeeeee!” as she blows up a Dalek, you can’t help but be taken in by her enthusiasm.  Is it all the destruction and mayhem that has Missy so giddy or is there a bigger plot up her sleeve yet to be revealed?  Only time will tell.  Michelle Gomez proves to be a wise addition to the cast, her shenanigans are topped only by her evil little comments.

The Doctor is grief stricken at the loss of Clara. He threatens the Daleks and Davros demanding they bring Clara back.  Seeing Capaldi’s Doctor so deeply invested in Clara is a welcome change from the cold, aloof Doctor in Series 8.  Davros shows a side we never expected from one of the Doctor’s greatest nemesis.  He’s vulnerable and fully reliant on Daleks to sustain him, he’s like a parasite.  He wants to see the Doctor and the sunrise with his own eyes before he dies.  By the looks he gives behind the Doctor’s back and comments he makes to his bodyguard we know there’s something he wants to get from the Doctor.  The Doctor seems to be playing into his hand.  Anyone who knows the Time Lord knows he is no fool but loves to play the fool to his enemies.  The Doctor uses some regeneration to help Davros so he can see the sunrise one last time.  Davros speaks of an old Gallifreyan prophecy about a hybrid creature.  The Hybrid was two great warrior races forced together to create a warrior greater than either.  The Daleks were able to syphon regeneration energy and Davros believes this will create a half Dalek half Time Lord Hybrid.  Of course the Doctor planned for this and had an exit strategy using incredibly old Daleks that had been reduced to a slime attacking the Daleks in their casings. 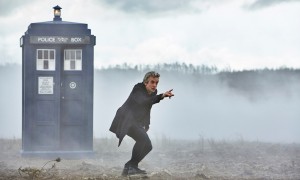 While the Doctor makes his demands with Davros, Missy and Clara have removed a Dalek from its casing in order to work their way back into the city.  Clara is inside the Dalek casing with Missy acting as though she’s the Dalek’s prisoner.  We learn that Daleks channel their emotions to their weapons and when they’re yelling “Exterminate” it is how they reload.  Clara discovers when she tries to say her name the casing will say “I am a Dalek” and that the words “I love you” and “we are different” come out as “Exterminate”.  Knowing Missy, she was already aware of this fact.  She was hoping when the Doctor comes upon Clara in the Dalek casing he’ll kill her thinking she’s just another Dalek.  What she did not account for was the word “mercy” being in the Daleks vocabulary.  That word is what stopped the Doctor, he knew this wasn’t your average Dalek. He tells Missy to run once he gets Clara out.  Missy appears to have another plan forming when she encounters some Daleks in her retreat.  I’m sure this isn’t the last we’ll see of her or her new Dalek friends.  Clara and the Doctor escape in the Tardis and wind up going to the past to help Davros get off a battlefield and get back home.  This is where Davros learns Mercy and why the Daleks know the word.

This episode didn’t have as much shock factor as last episode but it was still a wonderfully done episode.  The only thing I don’t understand is why the Supreme Dalek did not recognize Missy.  He knows with utmost certainty that Clara is dead but when he’s faced with Missy for the second time, he does not seem to recognize her at all.  Putting that bit aside, this episode was brilliant.  Watching the Doctor and Davros spar with every word and action was fascinating.  You could see that every move was calculated on both sides.  It was like watching two geniuses play chess.  Episode 1 starts on a literal battlefield and this episode was a battlefield in the mind.

Each series has something it’s working towards. We’ve had Bad Wolf, Saxon, planets disappearing, the crack in the wall, the Silence, the impossible girl, etc.  This series looks like it will be the Hybrid.  We know it’s something the Doctor is running from.  Was he mentioned in the prophecy?  Why does he seem to think it’s his destiny to create the Hybrid?  Doctor Who showrunners have been inclined to drop hints through a series or two and then tie it together with a bow as a gift for us viewers.  I’m inclined to believe the Hybrid will be a human/alien hybrid.  The series has shown repeatedly that when the Doctor gives humanity the option of war or peace we inevitably will choose war.  From Prime Minister Harriet Jones and the Sycorax in Series 2 Episode 1 to all the Doctor’s companions banding together to destroy the Daleks and possibly Earth in Series 4 Episode 13; humans will naturally fight to the death if they believe they are protecting a greater cause.

Steven Moffat himself said that the next two episodes are some of the scariest the show has ever produced.  Episode 3, Under the Lake has me excited for the chills and thrills of watching from behind the sofa.