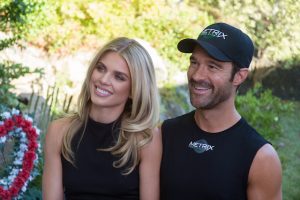 I caught up with AnnaLynne McCord after Pop’s Television Critics Association panel for her new comedy Let’s Get Physical, premiering Wednesday, January 24 at 8:30PM. This was the first time we’d spoken since our interview for Trash Fire and a lot has happened since then.

Let’s Get Physical is a comedy about dueling gyms. McCord plays the queen bee of the intense villain gym, along with Chris Diamantopoulos, although she told the panel she doesn’t go to gyms in real life. Since McCord is the president of together1heart, fighting human trafficking, our conversation turned towards the current movements against sexual assault and harassment. 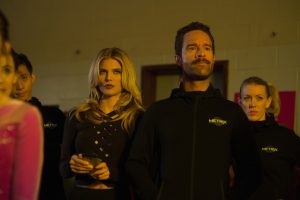 WLE: We’ve talked about a lot of your dark work. Was it nice to do a comedy?

AnnaLynne McCord: Yeah, it was actually something I really wanted to do was to try comedy and I was scared to death. Chris and Matt were all a really great help making me feel a little more comfy because they’re comedian experts.

WLE: Does this kind of humor match your sensibility?

AnnaLynne McCord: I think there is always a tone with me where it’s kind of more understated. I definitely, in my independent films, I’m kind of fucked up. So she’s still got a don’t fuck with me kind of air which I think I play in my independent films as well. There’s an element where actually, between Chris and I, there’s a time when you’ll see me more over the top. We’ll improv and go at it and it’s pretty fun. It’ll be very different but you’ll still see the Annalynne shoved underneath.

WLE: What were the craziest moves you learned? 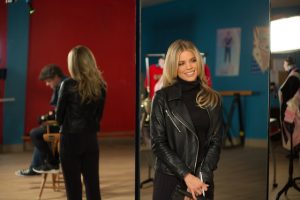 AnnaLynne McCord: We had one day where they were going to cut a montage that we really liked. At the very end of the night, we’re wearing VR, literally wearing virtual reality goggles. They show us something one time and they’re like, “Now do this, in sequence, together, in sync, with the goggles on.” I’m like, what? So you can’t see anything and you’re supposed to know when to hump the air and whatever. That was a funny moment. I wanted to wear a full V cut. They were like, “We’ve got to make it more modern.” I love that.

WLE: Was it like choreography for the workout scenes?

AnnaLynne McCord: It was a dance and it is aerobics.People who care about aerobics want to see aerobics. They don’t want to see dance. Chris and Matt redid the entire thing. So these guys did all their dance rehearsals, learned all the moves and then had to 10 minutes before, or not even, change everything and go on YouTube and look at aerobics moves and put those in. I, for one, really enjoyed watching it happen but it was a lot of work for them.

WLE: If you don’t like going to the gym, do you have to force yourself to for the business you’re in?

AnnaLynne McCord: I’m very thankful to mom and dad and good genetics because I don’t have to go and I don’t. I’m just very thankful for that and I hope it never goes away. I do Tae Kwon Do. I have an actual master and do a private class. I like that, but it is on my schedule.

WLE: Has the #MeToo and Time’s Up movement also raised awareness for bigger picture issues like human trafficking which you’re involved with through together1heart?

AnnaLynne McCord: Yes. There’s a kind of dual answer to that. I’m thankful for the awareness that it has put around the female dynamic in the world, but my reservation has only been that it’s been calling people out in the way that is being done, I don’t think is fair. Suddenly we’re in a world where you’re guilty once accused, and I don’t like that. As a survivor of sexual assault myself, as an advocate for women who have experienced sexualized violence, we don’t want to go swing the pendulum the other way and be unfair to the one father who never did anything, who someone had a vendetta and said something that wasn’t true. We have to have some kind of integrity with the way we’re doing this and we have to be careful with campaigns like #MeToo, even though I posted #MeToo because it’s true for me. I have a little bit of a problem naming names in this dynamic without any integrity behind it. There are beautiful letters that were written by women that really made this an incredible movement. I just don’t want to see it go too far because it hurts the cause. It doesn’t help it. So in that regard, there’s kind of a double answer. Yes, it’s put more light on this and for that I’m thankful, but I do put a very big cautionary sign up to everyone. Do it with integrity. Think about every man as your little boy grown up. If you have a son or you have a daughter and your daughter comes home and says, “Daddy, I was raped?” What do you do? But your son comes home and says, “Daddy, I was falsely accused.” What do you do? It’s very important that we bear in mind that making accusations, it’s a very hard thing to balance.

WLE: This is still brand new though. We’re saying believe women. That’s not saying believe women despite any evidence to the contrary. It’s saying start with believing women. Then vet any counter-evidence. The Washington Post had Project Veritas try to sell them a bogus story and they completely nailed it right away.

AnnaLynne McCord: Well, I think if you were the spokesperson it would be awesome. What you just described is integrity. That’s doing it with integrity and that’s all I ask as a woman who it’s happened to, as a woman who cares about this issue very much and has spoken out on it for a very long time. Please do this with integrity. What you’re saying is exactly how it should be done. I think in some ways, we have gone too far and I just want a conversation about how we’re doing it and is this the best way. I have a three-year-old little brother. Thinking about my three-year-old little brother’s life and growing up. Is he going to be scared to hit on a woman because maybe she’s going to think it was inappropriate? I want to have a conversation like that about this.

WLE: Isn’t it okay if men feel a little bit more uncomfortable since women have for decades and centuries?

AnnaLynne McCord: My little brother shouldn’t be punished for something a man did 100 years ago. I stand alone a lot of times in this belief so I get flak for it, but I believe that in this moment right now, what we’re doing is starting a conversation. That is the most beautiful part. If we continue this dialogue and we keep the focus on the personal element, not the big scale. It’s easy to throw darts at someone over in Hollywood/producer/studio who we don’t know. But if you bring it home, you’ve got to think about it in that way. I was talking about the Harvey dynamic when that first came out. What has happened from that has been incredible in the sense of being a survivor who was silent for almost a decade. For women to finally feel like they can say something and they don’t have to apologize anymore, I’m so grateful for that. At the same time, I just want it done in a way that if it was someone you knew and it was something that could harm your entire world, would you do it differently? If you wouldn’t, then do exactly what you’re doing. That’s my only request. That to me is your own personal integrity. I’m not here to tell you what integrity is, but if you do it with what’s true to yourself, I think we can do this in a better way than perhaps it might be in some different circles being done right now.